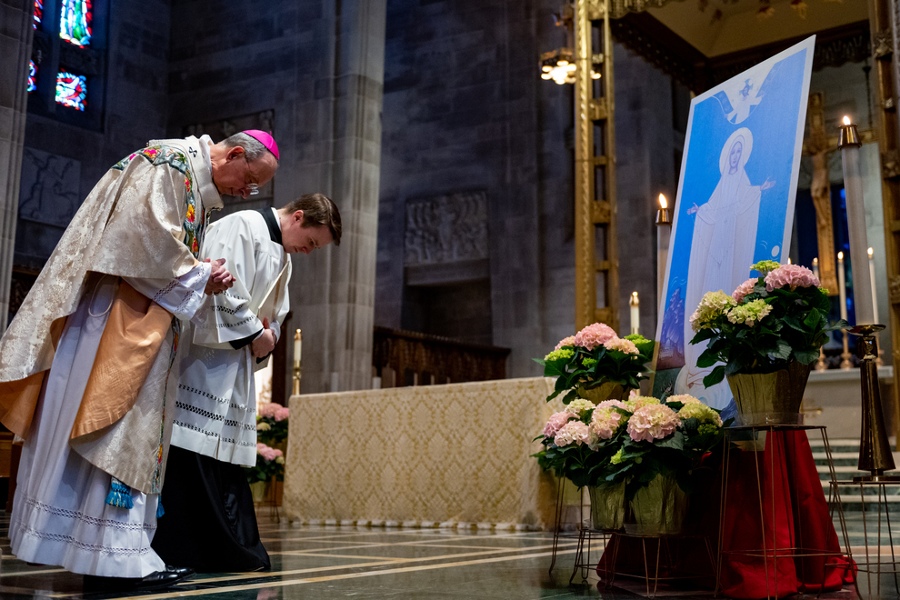 Draped in the yellow and blue flag of Ukraine, Maya Lancaster appeared engrossed in prayer during a special mass on March 25 at the Cathedral of Mary Our Queen of the Fatherland.

As Archbishop William E. Lori solemnly consecrated Ukraine and Russia to the Immaculate Heart of Mary, Lancaster stood with 1,000 others – all focused on an image of the Blessed Virgin Mary holding a rosary displayed in the Shrine of the cathedral.

“We hope that, through your heart, peace will rise once again,” Bishop Lori said as he implored the Blessed Virgin Mary to end the war in Ukraine. “We dedicate to you the future of the whole human family, the needs and expectations of each people, the anxieties and hopes of the world.”

Lancaster, whose Ukrainian mother was born in a displaced persons camp in Germany at the end of World War II, told the Catholic Review she felt called to attend the special evening liturgy. Prayer is essential, she says.

“In our darkest moment, it gives us hope – even hope for dawn,” said Lancaster, a cathedral parishioner who said she no longer had loved ones. in Ukraine because the majority of his mother’s family died during a purge of intellectuals and protesters. in World War II.

The consecration of Ukraine and Russia to the Immaculate Heart of Mary by Bishop Lori mirrored the same consecration made earlier in the day by Pope Francis at St. Peter’s Basilica in Rome. The pope has asked all the bishops of the world to join him in performing the consecration on the Solemnity of the Annunciation.

When Mary appeared to three shepherd children at Fatima in Portugal in 1917, she asked for the consecration of Russia to her Immaculate Heart. Previous popes, including Saint John Paul II in 1984, consecrated Russia to the Immaculate Heart, but did not utter the country’s name in their prayer.

Although Sister Lucia dos Santos, the last surviving seer of Fatima, said before her death that St. John Paul correctly completed the consecration, some have questioned its validity since he did not mention Russia by name. .

The consecration prayer used by Pope Francis, Archbishop Lori and other bishops on March 25 explicitly mentioned Ukraine and Russia.

“As Bishop Lori said, we ask the Blessed Mother to shine her motherly love on a devastated region,” Lancaster said.

Anthony Murawski, parishioner of Holy Rosary in Fells Point, attended the liturgy and consecration to show support for the people of Ukraine.

“I think it’s really a battle between good and evil right now,” he said. “Coming here for this Mass reaffirms our commitment to trust in God and that good prevails.”

Sarah Hoff, a St Thomas Aquinas parishioner in Hampden, said she felt worried about the state of the world in recent years and believed the rosary is the best way to bring peace. Archbishop Lori has asked Catholics throughout the Archdiocese of Baltimore to pray the Rosary on March 25 as a special prayer for peace.

“I’ve prayed the Rosary every day for the past year — and sometimes more than once a day,” said Hoff, who brought her 14-year-old daughter, a freshman to Mercy High School. in Baltimore, at the cathedral mass. “When I pray the Rosary, I feel at peace because it reminds me that there is something greater than the tumult of this earth. It relieves me and helps me keep an eye on what’s really important.

Several parishioners from St. Michael the Archangel Ukrainian Catholic Church in East Baltimore were among those attending the cathedral mass.

Use the navigation arrows on the slideshow below to see more photos of Kevin J. Parks below. The story continues below.

Ihor Remsky, a St. Michael parishioner, said he had four first cousins ​​in Ukraine. One of his family members is a refugee in Poland with his 13-year-old son. His 17-year-old son remains in Ukraine to fight Russia, Remsky said. Another member of the family is staying in Ukraine to take care of the cattle in his village. She sleeps in the basement for fear of being bombed, Remsky said.

Remsky noted that it is difficult to bring help to loved ones because the mail does not go through.

“Then pray,” he said. “You come here, go to church, go take communion for them. Hope they do well.

Anna Barron, another St. Michael parishioner who also worships at St. Isaac Jogues in Carney and St. Ursula in Parkville, has refugee family in Poland.

“We are in unison in the world today, praying to the only force, the only true God who can save and change the course of history,” she said.

In his homily, Bishop Lori asked that Mary’s love shine not only on war-torn Ukraine and its suffering people, but also “even on the hearts of those who carry out this unjust aggression.”

“As this act of consecration resounds from every corner of the earth,” he said, “surely Mary, our mother, will hear our prayer.”

Watch a recorded live stream of Mass on March 25 below.

Gina Zurlo | Why Christianity’s future is female – and African