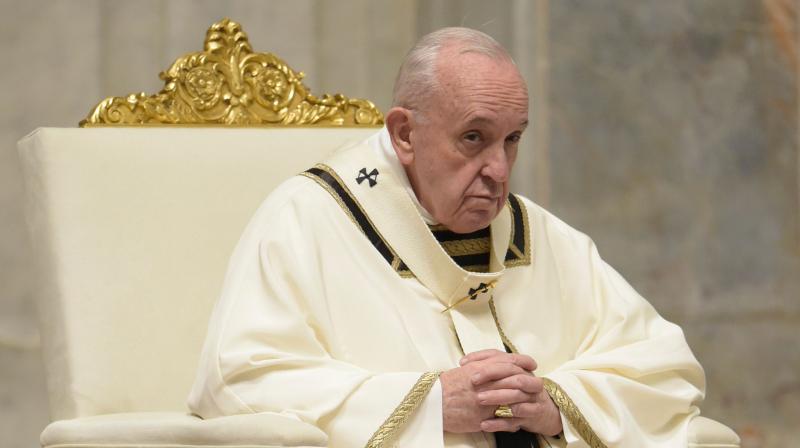 The war in Ukraine poses a major crisis for “political Christianity” in the West. How else to explain the recent intervention of Pope Francis, who wields enormous influence at the head of the Roman Catholic Church, despite the fact that the Vatican is no longer the guardian of temporal (worldly) power in the political arena. Was the pope sending a message to the United States and the West, all of which are predominantly Christian nations, though not necessarily professing a state religion?

Political empires and the papacy are of course no longer sailing in the same boat, as they were in the Middle Ages in Europe and other times. But even today, if the pope speaks out on any global issue, especially on interstate conflicts in Europe, the world is all ears.

What about the 85-year-old head of the Holy See proclaiming that “the real scandal of Putin’s war is NATO barking at Russia’s door”, which caused “a bad reaction and sparked the conflict » the Kremlin? The pope’s comments cannot be ignored or overlooked. The Holy Father deserves to be commended for his frank, just and frank views, going beyond the call of papal duty, to speak on behalf of humanity and try to turn negativity into positivity.

Given that the widespread perception in the West and much of the world is that President Vladimir Putin is responsible for the current conflict, for launching the invasion of Ukraine and all that has followed, natural justice requires that the points raised by the Russian leader are duly taken into account. examination before pronouncing a verdict. What prompted Mr. Putin to do what he did or is doing, which triggered the sanctions and other measures against his country? Has he lost his sense of judgment? Here is what he said: “For the past 30 years, we (the Russians) have patiently tried to reach an agreement with the NATO countries on the principles of equal and indivisible security in Europe. In response…we faced either cynical deception and lies, or pressure and blackmail, as the NATO alliance continued to expand despite our protests and concerns. Its military machine is moving and getting closer to our borders.

Mr. Putin’s statement took place on February 24. Pope Francis’ statement came on May 2, exactly 67 days after the outbreak of hostilities in the heart of Europe, where for centuries past four warring empires had clashed: Vienna, Berlin, Moscow and Constantinople. /Istanbul. Where all four had vied for political power, prestige, position, trade, territory, and conquest – leading to endless conflict.

Did the pope then raise the flag of the US-led NATO alliance, signaling them to resort to self-introspection and chastising Moscow for its avoidable overreaction?

The pope’s point is piercing and poignant. It deserves a fresh look, for possible repercussions in the ecclesiastical as well as temporal domain of political Christianity. Psychologically, the pope seems distraught over the possible repeat of the escalating conflagration of white Christians against white Christians in the heartland of Europe, jeopardizing the very existence of the Western-led Christian world. From politics to economics, from military domination to monetary domination, MAD (Mutual Assured Destruction) looms large. For the first time since World War II, blood flows from two belligerent Christians, the developed political world of white Christians as a whole punishing Christian Russia. It’s like the “war of all against all” in Thomas Hobbes’ Leviathan in the 17th century.

Should we revisit the former belligerents? The Germany of the two world wars, the Vienna of the Habsburgs and the Moscow of the Romanovs? Doesn’t the current scene resemble the centuries-old history of provocation-reaction-action of war? In the same breath, isn’t the history of the Church also a history of division and dispute? Besides, can religions such as Islam and Hinduism claim a clean criminal record due to many intra-religious differences, disputes and discords? There would not have been centuries of conflict between Muslims and Muslims and Hindus against Hindus everywhere. Religion, used for the settlement of political disputes or restitution, has always taken politics by storm, dragging ethically preaching ecclesiastical priests into the whirlwind of vitriolic violence and virulence.

The history of endless Christian intra-political conflict in Europe had led Nobel Prize winner Bertrand Russell to pronounce his prophetic verdict: “Unfortunately, as soon as Christians gained political power, they turned their zeal against each other”. (A History of Western Philosophy) Russell’s twentieth-century vision was complemented by the twenty-first-century statement of another leading Western scholar, Diarmaid MacCulloch, in his magnum opus A History of Christianity: “During for most of its existence, Christianity has been the most intolerant of all faiths, doing its best to weed out all competitors.

The two world wars of European origin of the last century stand out as the direct and corroborating testimony to reveal, recall and poignantly revive reality: the Russian-Ukrainian conflict of 2022 proves that the two great Western minds of Russell and MacCulloch are the best sample and example of their wisdom, which eventually forced a deeply disturbed Pope Francis out of his ecclesiastical cloister to air his views and join in the debate. The Church has entered the arena of the state, despite the theoretical separation of powers between the two. The Holy See is well aware that despite the primacy of Rome, the Church today is divided between East and West. Christianity, although born in the Middle East, went west after the difficult days of initiation to Greece and Rome. Later, from the seat of the Eastern Roman (Byzantine) Empire of Constantinople, emerged the Eastern Orthodox Church of Russian Christianity.

As in ecclesiastical affairs, the political system of Western Europe was also generally at odds with Moscow, and vice versa. It was then the hiatus in every issue between the nations of Western Europe and the maze centered around the landmass of Moscow, which saw Napoleon and Hitler first go astray and then get buried under their own game of able. The two mega-invasions of Russia – by France (1812) then Germany (1941), and now the reverse conflict of 2022 – prove that there is little hope for a permanent rapprochement between the alliance Washington-Brussels and Moscow anytime soon. Despite Pope Francis’ open criticism of the West and his willingness to undertake a peace mission in Moscow, which indicates that the Vatican is ready to try to find a solution and bridge the gap between the Holy -Headquarters and the Russian Church At a critical time, power elites and arms dealers on both sides are in no mood to give the Hand of God a chance.