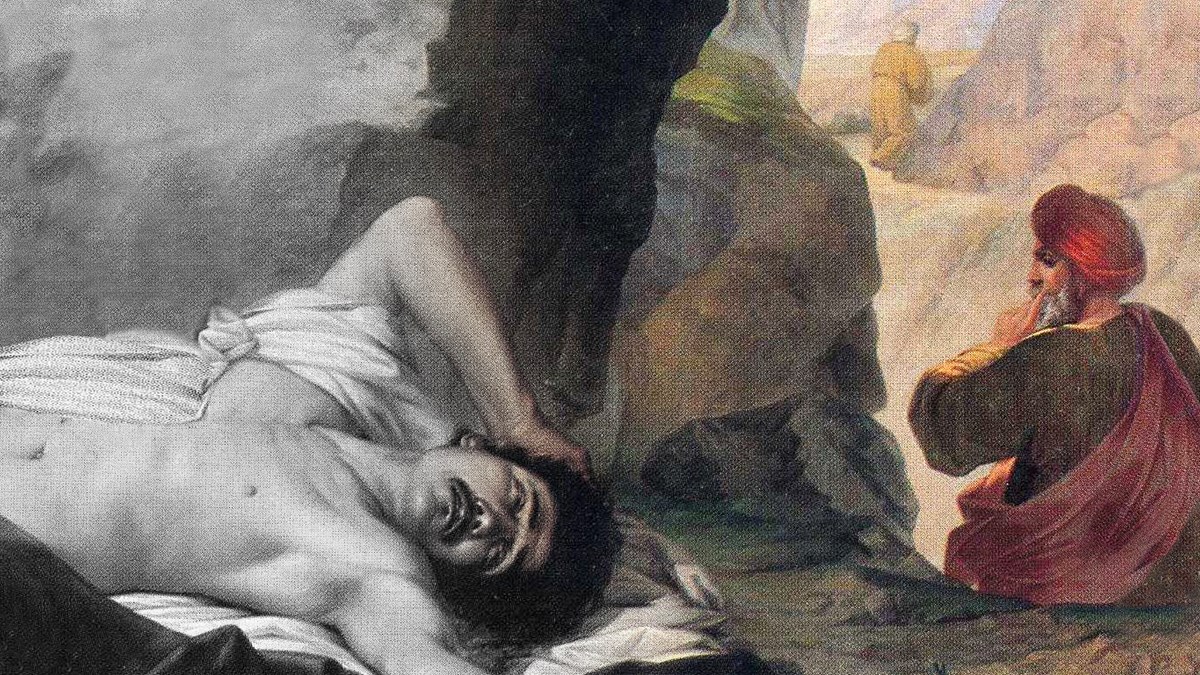 Perhaps the most heartbreaking part of last week’s report on the SBC’s executive committee was its summary of interviews with survivors of sexual abuse. Christa Brown speaks with excruciating eloquence of the consequences not just of abuse in the church, but of the callous inhumanity that greeted survivors’ attempts to tell their stories.

“For most believers,” she says, “their faith is a source of comfort, a reservoir of peace and a resource for healing. For her, however, faith is “neurologically tied to a nightmare.” She was repeatedly raped as a child by her pastor and endured a torrent of hostility when she spoke the truth. “It’s not only physically, psychologically and emotionally devastating,” she says, “but it’s spiritually devastating. It’s soul murder.

The trend is consistent throughout the report. An individual suffers the horrible evil of abuse and then suffers a second evil of monstrous indifference from religious authorities. The second evil is particularly distressing. It’s one thing to suffer at the hands of a single low-level hypocrite. It’s another when the company of the great and the saints treats you like your suffering means nothing.

This same pattern, of course, is also found in one of Jesus’ most beloved parables. The parable begins with an innocent traveler on the road from Jerusalem to Jericho. On this hard and narrow path, thieves hound him, strip him and beat him until he is close to death. A priest passes by, avoids him and leaves him to die naked and alone. A Levite, a man who serves the worship of God in the temple, does the same.

Then a Samaritan, the last person Jesus’ audience might have expected, shows mercy to the traveler. He pours oil and wine on his wounds, bandages it, carries him on his own donkey to an inn and nurses him overnight. He gives the innkeeper some money and says, “Take care of him, and when I return I will reimburse you for any extra expense you may have” (Luke 10:35).

Some parallels with our current situation are obvious. The church body is riddled with the cancer of abuse. There has only ever been the Roman Catholic Church. Surely it’s not just the Southern Baptist churches. As the voices of survivors and defenders have said so heartbreakingly, there are thieves and robbers among us who will prey on the vulnerable and leave them humiliated and abused and fighting for their lives.

The existence of the robbers, however, is almost taken for granted in the parable. Although we should do everything in our power to stop them, as long as there is sin, we will have aggressors among us. It is the religious leaders in the parable who are most severely condemned. The priest and the Levite didn’t just fail to do the right thing. They joined the thieves in their dehumanization of the abused. They may have eloquently professed their faith in temple courts, have crowds waiting for them in Jericho, have important things to do. But your faith is never so true as how you treat the image of God before you.

When Jesus is asked who is the greatest in the kingdom of heaven (Matthew 18:1-14), he brings a child before him. He tells his disciples not to “despise these little ones” but to be like the shepherd who leaves the 99 on the hills to seek the one lost and vulnerable sheep. The kingdom of heaven never neglects the suffering of one to serve the greatest number. She neglects neither the smallest number nor the smallest person. “And whoever welcomes such a child in my name,” he says, “welcomes me”.

Now imagine that the victim saw the priest and the Levite. Imagine she cried out for mercy but received none from these men who were supposed to represent God’s love. How would that have shaped her? Would it have caused her to question everything she thought she knew about who were the righteous and who were the wicked?

Or imagine the victim starting to tell the truth about what they saw. Word spreads of the insensitivity of the priest and the Levite, of the inhumanity of these putative men of God who serve in the temple of the Creator but despise the crown of his creation. But the victim cannot prove it. Would the priest and the Levite object that “the world” attacked them because it was hostile to the righteous? Would they call it a “satanic ploy” to distract them from their mission?

After all, it is easier to attack the world than to acknowledge our sin. They tend to blame the world who finds little to blame in themselves. They rage over the glint in the secular eye that is blind to the branch in theirs. It is our own sins that should grieve us the most. It is only our own sins, losing our first love, that can truly destroy the testimony of the church which is the hope of the world.

So we can rail against “the world” until we lose our voices. This is precisely how we lose our voice, in fact, or at least any voice worth hearing. Beware of the prophet who has more to say about the sins of the world than about the sins of God’s people. It is not “the world” that has left the patient by the wayside. Nor was it “the world” that opposed Jesus’ vision for the kingdom of God unto death. They were the “righteous”. They were the religious authorities.

Suffice to say it was us. Several of us.

Or imagine another twist. The wickedness of the priest and the Levite (for it is wickedness) was attested by witnesses. But the religious authorities surrounded them and demanded silence. The truth, they say, would harm the reputation of the priesthood. This would harm the institution of the temple. The truth should never be known. They would rather sacrifice the soul of a broken victim of abuse than undermine the faith of millions.

In our time, we have witnessed a shaking of the foundations of many Christian institutions – from mega-churches and apologetic ministries to summer camps and entire denominations. But remember this: although the institutions of Christendom are meant to serve the kingdom of God, they are not the kingdom of God. “Flesh and blood cannot inherit the kingdom of God, neither does the perishable inherit the imperishable” (1 Corinthians 15:50). The kingdom of God is an irruption from heaven, an inversion of the normal order of things in which the first becomes last and the last becomes first, the lost are found and the wounded healed, the reign of Love and Truth herself.

The innkeeper receives less attention in the story, but his role is significant. It was recognized as early as Irenaeus and Origen, and repeated by theologians like Ambrose and Augustine, that the Good Samaritan resembles Jesus much more, and the innkeeper resembles the church. After all, Jesus is the Great Physician. Only Jesus can heal the wounds these ministers have inflicted. He meets the suffering, the mistreated, the humiliated and the abandoned on the stone path when it seems that the whole world has abandoned them. He alone heals them with oil and wine.

The healer brings the patient to the inn, treats him and gives the innkeeper two denarii, the equivalent of two days’ wages. Take care of him until I returnhe says, and if the cost is higher, then I will cure you. The innkeeper, therefore, in the words of Bruce Longenecker, is “vulnerable to loss”. The innkeeper takes the risk. He resumes the work started by the healer. It provides shelter, security and a home. He listens to the victim’s story. He takes care of himself while he heals. He wants to love the patient whom the healer loves.

We often pride ourselves on being the Good Samaritans. We are not good at all. Not yet. Not today. But we could be the innkeeper. We might be inspired by the actions of a healer who is good beyond measure in caring for his sick until he returns.

It is worth remembering why Jesus told the parable in the first place. An “expert in the law” asks him what a person must do to inherit eternal life (Luke 10:25). Jesus turns the question around, and the expert suggests that you should love God fully and love your neighbor as yourself. But then the neighbor asks, “And who is my neighbor?” (v. 29).

He wishes, as jurists often do, to define the limits of religious responsibility. Instead of asking how far her love box extend, he asks how far he to have to. It is easy to hear echoes of this question in our time. Do I love them – the abused, the violated, the despised – or can I find a way to absolve myself of all responsibility? How can I set limits on the love God requires of me? Law expert asks who deserves to be his neighbor. Jesus answers a different question: How can I become neighbor to others?

Perhaps this is the lesson we should take from the parable as we reflect on the disease of abuse within the church. Sometimes meanness is accompanied by a mocking smile. Sometimes he comes in the guise of a villain, a thief who preys on the vulnerable. However, just as often, if not more often, wickedness comes clothed in righteousness. With a little lip, a furrowed brow and endless protestations of concern. Wickedness takes the form of the priest and the Levite on the road to Jericho. It comes in the form of those who hear the cry of the abused and abandoned and choose to keep walking.

Righteousness, on the other hand, comes from unexpected places. It is rarely the domain of the great and powerful. Kindness is Christ on the lonely road, and perhaps it is simply our honor, the least we can do, to love the wounded he brings our way. We need not ask ourselves if the sufferer is worthy of us. We must ask ourselves how we can be worthy of them.

Timothy Dalrymple is President, CEO and Editor of Christianity Today.