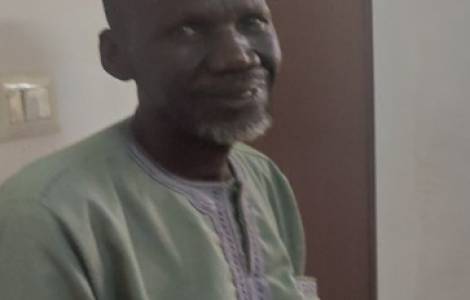 Dosso (Agence Fid Rafael Casamayor, priest of the Society of African Missions (SMA), of the Dosso mission. The priest shares the testimony of a Christian from Islam who is now part of the Catholic community of Dosso: “ It didn’t take me long to find Pierre, he is a discreet man, not very talkative and with an intense interior life. He is a treasure in our mission because he takes us directly to the heart of our faith, the love of God and neighbour”.
“I am from Filengué, Djerma or Songhay, as you prefer – Pierre intervenes – and since I was a child I received a Muslim education. After school I went to the Koranic madrasa where I studied Islamic principles with children and teenagers of my age. Already at the end of my adolescence I started working as a welder in a workshop where one day I found books that had remained on the tables. one and I brought it home. I started reading it and since then I haven’t parted with it myself, it was the New Testament, “says the man. “I loved it read this book, there were stories that touched my heart. I liked to talk about it with some of my colleagues, none of whom were Christians, but they knew certain things. They were stories full of tenderness and closeness. to the poorest, but I didn’t know what they corresponded to in real life, I didn’t know any Christians. Later I was sent to work in Agadez and there I joined the Christian community. I wanted to know more about the gospels and the lives of Christians”.
“My stay in Agadez was a blessing because of all that I learned and experienced with the very diverse Christian community: there were Beninese, Togolese, Burkinabe, French, Nigerian. I saw reflect the spirit that I thought I would discover in the Gospels that I read in my adolescence in Filengué.During my years in Agadez, I not only discovered the message of Jesus and a community of reference that helped to live it, but also opened a spiritual path for me which answered my adolescent dreams which had nourished my reading of the Gospels”.
The lay missionary concludes his testimony by declaring with certainty that he never regretted having converted to the Christian faith, “not even for a single day. What I find hard to accept is that my children are still Muslims even though I never forced them to follow in my footsteps”. (RC/AP) (Agenzia Fides, 17/5/2022)