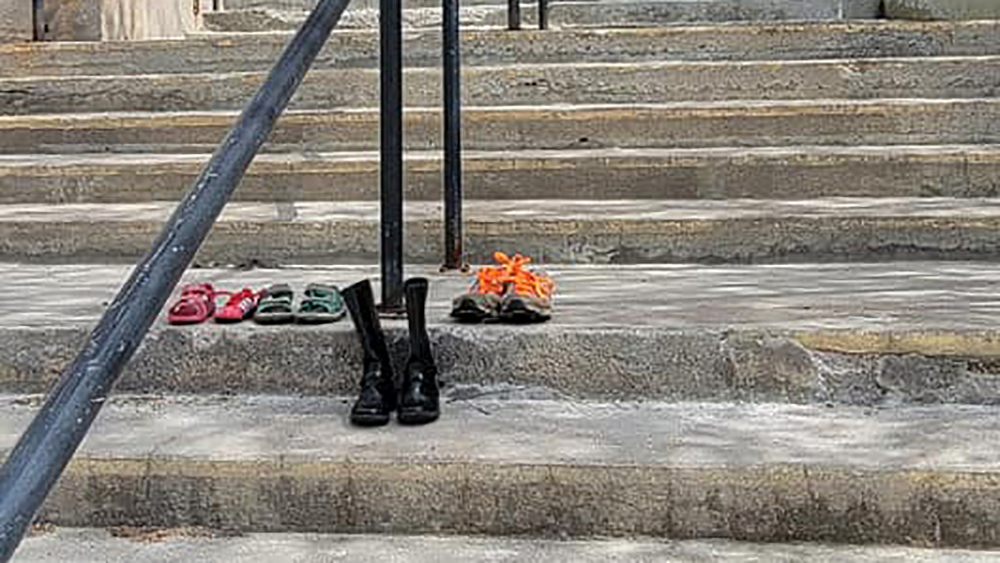 Anger, grief as shoes are taken off at Fort Smith Catholic Church

Warning: The following report contains descriptions of genocide and violence committed against children and indigenous communities. If you need assistance, the Indian Residential Schools Crisis Line can be reached 24 hours a day by calling 1-866-925-4419.

Like people across the country, Briann Gagnon wanted to place a pair of children’s shoes on the steps of the local Catholic church in remembrance of the 215 Indigenous children whose bodies were found buried at the site of the Kamploops Indian Residential School.

But when she stopped at the parish of St. Joseph’s Cathedral in Fort Smith, a man tried to stop her. When she explained why she wanted to leave a pair of shoes, she told Cabin Radio, the man ignored her – and threw the shoes in a dumpster behind the church.

Father Cornelius Ngurukwem, the reverend of the church, was unaware of the situation when he was first contacted by Cabin Radio. He then helped Ramanda Sanderson, who got into the dumpster to retrieve the shoes and teddy bears, and Cayleen Adam put the items back on the church porch.

“My mother went to residential school for four years,” Gagnon told Cabin Radio. “So it really touches the house, just knowing and hearing about everything. “

When Gagnon pulled up to the church on Tuesday afternoon, she said the man pulled over right behind her vehicle and “locked it”.

The man has been identified as local electrician Phil Tesdale. Reached by phone, Tesdale declined to comment on the incident. He has been described by residents as the keeper of the church grounds.

Gagnon added a pair of black boots to the memorial and was taking a photo when she heard Tesdale tell her to put all of the memorial’s shoes in her vehicle, she said, adding that the shoes placed at the memorial during the weekends were gone. but no one knew who was responsible.

“I said, ‘No, do you realize what the shoes are for? And he said, ‘Yeah, but that’s garbage,’ ”she recalls.

Gagnon said Tesdale asked him who was going to clean the shoes and complained about others who had left bottles of alcohol on church property in the past.

She said she tried to explain more about the children whose remains were discovered by the Tk’emlúps te Secwépemc First Nation last Thursday and that she was paying tribute to them.

“This is our church,” she said in response.

Gagnon told her she would come back and remove the memorial later, even offering to give the man his phone number.

“Just let them stay on the steps,” she pleaded. Instead, she said, he walked over, took the shoes, put them in the back of his truck, went to the dumpster and threw them in the trash. .

“I stayed there and cried,” she said. “I couldn’t believe this was happening.

“In a time when everyone is supposed to come together and heal, this is not the way it should be. People should be able to feel comfortable expressing themselves and healing together. And then it’s just actions like this that prevent healing. We cannot move forward because it is like this.

The employer of Tesdale, a local construction company, told Cabin Radio that the reported incident was “terrible” and would be further investigated.

As of Tuesday evening, more than a dozen pairs of shoes had been returned to the memorial, including Gagnon’s little black boots.

“I just brought my kids back from school and we will also be leaving with more shoes,” she said after the confrontation, expressing gratitude to the community that gathered and stood behind her.