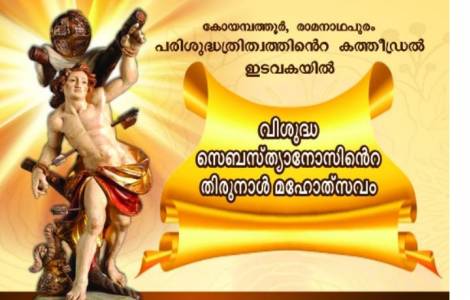 Coimbatore (Agenzia Fides) – Two unidentified men destroyed a statue of Saint Sebastian located in the premises of the Catholic Holy Trinity Cathedral in Ramanathapuram, in the district of Coimbatore, in the state of Tamil Nadu, in southern India .
As learned by Agenzia Fides, the incident occurred on the evening of January 23. The two men arrived at the church on motorbikes.
As reported by Father Bastin Joseph, assistant parish priest of the church, one of them forced the gate, broke a window, entered the church, hit and destroyed the statue, then fled. . In recent days, the local community had also celebrated the feast of the saint. Father Joseph lodged a complaint with the Ramanathapuram police, who are investigating the case using, among other things, surveillance cameras. Holy Trinity Cathedral belongs to the Eparchy of Ramanathapuram, which legally belongs to the Syro-Malabar Catholic Church in the state of Kerala in southern India.
According to the United Christian Forum, from January 1 to 12, 2022, at least 19 episodes of violence against Christians were recorded in nine Indian states (5 in Chhattisgarh and 4 in Jharkhand). “Nearly 500 cases of anti-Christian violence were reported in India in 2021,” said AC Michael, Catholic lay leader and UCF coordinator. According to Michael, this is just the tip of the iceberg, as “many instances of attacks on Christians go unreported and undocumented”.
Commenting on the climate of violence and intimidation, Msgr. Oswald Lewis, Roman Catholic Bishop of Jaipur in the Indian state of Rajasthan, said: “India has always been a country where every religion is respected and followers of different religions have lived together in peace and harmony for centuries. However, in recent years religious minorities have also been targeted, particularly Christians and Muslims, as perpetrators seek to destabilize the country’s unity”. He added: “It is sad to see that the Christian community, which serves the country especially by dedicating itself to the poor and the marginalized, has become the target of violence. Moreover, the government’s inaction encourages the persecutors who go unpunished. The government must take effective measures to preserve the unity and democracy of the country”. (SD-PA) (Agenzia Fides, 25/01/2022)

Will the Catholic Church canonize a left-wing activist?