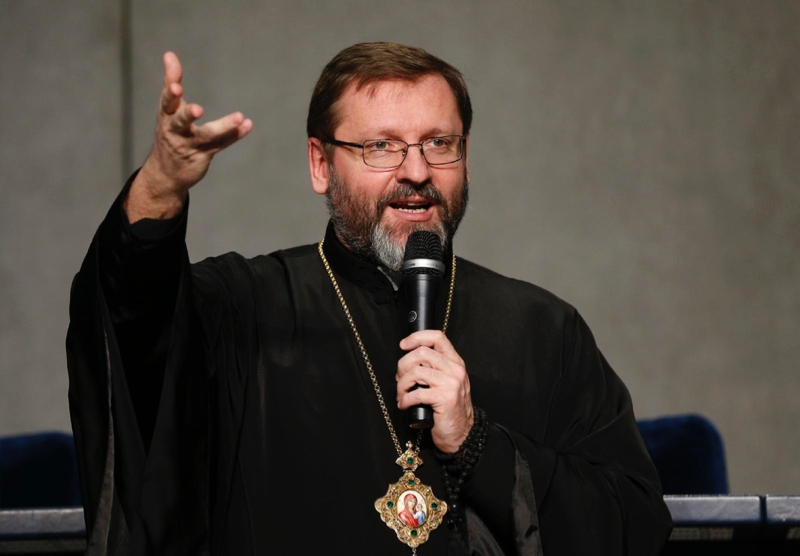 Archbishop Sviatoslav Shevchuk of Kyiv-Halych, Ukraine, a major archbishop of the Ukrainian Catholic Church, speaks to reporters at the Vatican on January 26, 2018.

The leader of Ukrainian Greek Catholics, Major Archbishop Svyatoslav Shevchuk, vowed that his Church would not abandon the Ukrainian people, despite threats of full invasion by Russian forces.

Shevchuk was speaking at a press conference organized by the pontifical charity Aid to the Church in Need when he mentioned the importance of the Church’s presence in eastern Ukraine, despite the fact that the number of faithful in this part of the country is very low.

“Most people there are over 65 and today they can’t get their pension. We are therefore faced with a serious humanitarian crisis in this occupied territory and assistance is becoming more difficult. Priests are unique mediators who can travel and take certain resources,” Bishop Shevtchouk explained.

“Even though many of the faithful have emigrated,” he added, “the number of people present at divine Sunday liturgies has not diminished. The possibility of having their priests present is vital. Those priests who remain there with our people, are the heroes of our time. They will not flee. We will stay with our people, as we stayed in Crimea.

Regarding Moscow’s tactics in the region, the head of the Greek Catholic Church said that they are reminiscent of Soviet times. “I was a Soviet soldier. In the Soviet army, violence was the first and last instrument of problem solving. You have to hit your enemy first, then talk to him. If you try to establish a dialogue, you will be considered weak, even if you show a desire to avoid escalation. Culturally, religiously, politically, we must oppose the use of violence as an instrument,” he said, complaining that the world is witnessing a rise in what he called “an idolatry of violence “.

The current Apostolic Nuncio to Ukraine, Lithuanian Archbishop Visvaldas Kulbokas, also spoke at the press conference, stressing that the Catholic Church is well respected and revealing the possibility of a papal visit in the near future. to come up. “In Ukraine, the most trustworthy religious person is Pope Francis, even though the majority of people are not Catholic. I hope that such a visit will soon be possible. We wait and hope,” he explained.

Russia opposes what it sees as Western encroachment on its borders and area of ​​influence, and has warned against Ukraine trying to join NATO or the European Union.

During this time IIn the early evening of Friday February 4, International Day of Human Fraternity, in the square in front of the Metropolitan Cathedral of Liverpool, a prayer vigil for peace and reconciliation between Russia and Ukraine and all other nations in conflict.

A banner recalled these other countries: Democratic Republic of Congo, Ethiopia, Lebanon, Libya, Myanmar, Mozambique, Sudan. The vigil was organized by the Missionaries of Africa who are in charge of the parish of St Vincent de Paul, Liverpool. Father Terry Madden, M.Afr., welcomed the group of 70-80 people who had braved the cold and rain to attend, including representatives from Pax Christi Liverpool. The following people took an active part in the vigil: Sr Pennie MacInnes (Sister of the Sacred Hearts of Jesus and Mary), Mrs Moira Potier, Ibrahim Syed (leader of the Merseyside Network of Mosques), Rev. Mike Loach (Vicar at Birkenhead) Rev. Dr. Miranda Threlfall-Holmes (Anglican, Rector of St. Luke-in-the-City), Priyanka Mohta (Hindu), Rev. Taras Khomych (Ukrainian Catholic Church), Cardinal Michael Fitzgerald, M.Afr. and Archbishop Malcolm McMahon, OP, who gave the final blessing. Paul Glover led the chanting during the prayer and Barbara Tolmie sent the group on their way with a song for peace.

Why are some Roman Catholic saints called Doctors of the Church?