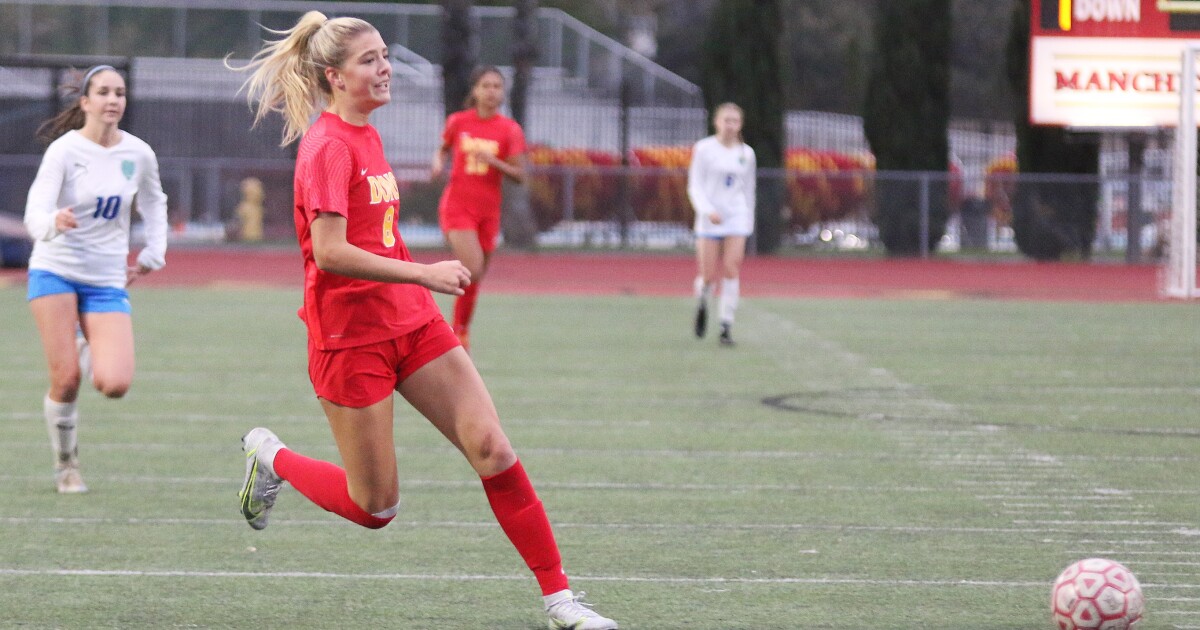 With just one month of the 2021-22 high school football season on the books, the Cathedral’s Catholic Women’s Team sports a brilliant 14-1 record, won a pair of high-quality tournaments (her own Butch Memorial Tournament Lee and the Excalibur tournament in Orange County), was second in another and outscored opponents, 55-12. It is not too early to count Cathedral among the privileged few with legitimate aspirations to win a section.

Ultra-seasoned head coach Dawn Lee has guided Cathedral teams to 11 CIF titles, including the 2020 Open Division crown, so expectations are still high, but what the Dons have done so far l ‘even led to a bit of a double take.

“Yes and no,” Lee said when asked if she was surprised at what her club has shown so far. “I thought we would be strong, but not that we would have reached the finals of three tournaments so early and that we would have been so strong in the process.” She says motivation and the intangibles are the catalysts for the scorching start.

“We have 11 seniors, so the hard core is very close and has real motivation because they didn’t win the CIF Championship last year after doing so in 2020,” Lee explained. “It’s also a really, really fun group. They are super talented and our new girls are already contributing – we just clicked.

Senior co-captains Kelsey Branson and Mia Adams, both starters for four years who have been friends since meeting through football at the age of 5, are among the key veterans Lee credits Lee for creating the right one. environment this season. Center-back Adams admits he had a few anxious moments leading up to his first year as captain.

“I knew we were capable of doing great things, but we had lost five or six seniors who were all starters and played really important leadership roles,” said Adams, who signed on for the Santa Clara. next year. “And as a senior manager, I was a little worried about the new responsibilities and the team dynamics.

“But we’ve always had a great chemistry and from the first game until now that’s all I could have asked for. I think we are strong in all areas and after last year I know all of us especially the seniors are still pushing a little harder to win another CIF title.

“It (CIF) was one of the best feelings ever and we tried to let our younger teammates know how great that feeling is.”

Branson, a 5-foot-10 forward linked to the University of Washington, elevated her game to otherworldly status in the Dons’ season opener. She entered 2021-2022 with an extremely honorable three-year total of goals (30) and assists (9), but has already racked up an incredible 21 goals (almost 40% of the number of teams) and 10 assists.

“Right now Kelsey is playing on another level,” said an admiring Lee. “She’s played a number of different positions over the course of her career and honestly I could put her anywhere on the pitch and be comfortable.

“She reads the game like no one I’ve ever seen. She really understands ball flight and knows how to position her body accordingly, which is a big part of why she scores so much.

Talent is always important, but it can be secondary to some of Branson’s more subtle characteristics, traits that only coaches or teammates can truly appreciate.

“Kelsey works so hard and is so humble – listening to her you would never know how good she is,” Lee said. “She has been invaluable to our program, not only through her athletic contributions, but also through her sheer enjoyment of being a Don player. When your top players love everything about being a high school athlete and are totally okay with what you’re trying to do, it makes a huge difference. She embodies what a high school athlete should be.

With the start of the Western League game just around the corner and the CIF playoffs just six weeks away, Branson recently took the time to share his thoughts on the current season, the benefits of high school football and his decision to attend the University of Washington.

Q — The fact that the pandemic has cast a pretty substantial shadow over the past two seasons of high school football may help explain why it feels like you’ve been in the cathedral “forever”. How do you feel and have you considered ending your high school career?

BRANSON — It seems like a long time and I’ve played so many games — but I’m so grateful for the opportunity and the kind of wish I could have a few more years.

I thought about the end a little bit and when I do, I’m really sad because it’s been such a good time. Having said that, I really try to stay focused in the moment. I’m sure I’ll think about it later.

Q — It looks like you did it all at Cathedral — what did this last season mean to you?

BRANSON — For me, I think it’s probably the most important and special season. This is my last year and Dawn (Lee) keeps telling us how much we have an amazing group of seniors. I want to make sure that I enjoy every moment because I’m with such an amazing group of people and that makes everything 100 times better.

Q — Speaking of your coach, what makes playing for Dawn Lee unique?

BRANSON — I’ve been playing soccer for a long time and Dawn is probably the best coach I’ve ever had. It makes us better players and better people. His priority is our team culture and ensuring that we all succeed as a member of the team. The emphasis is on having a good time and bringing passion into our game.

Q — For years, many of the best school-aged soccer players have chosen development club programs instead of playing for their high school teams. Why did you choose to play Cathedral and how did that decision work?

BRANSON — Before grade one, my best friend and teammate, Mia Adams and I talked about the high school versus club dilemma and we both decided to play high school football. It was a difficult decision. We thought about the future and wanted to play college football. The misconception is that you have a better chance of being seen and recruited by choosing the club path.

Q — As a senior, you are one of the co-captains of the team. How did you evolve in this leadership role and is it something that you are comfortable with?

BRANSON — I don’t really express myself but I try to lead by example, repeat and support what Dawn asks us to do. Over the years at Cathedral I have observed the different leaders of this team and they have helped shape me as I became a leader myself. I took something from each of them.

My first year, one of our seniors, Kelsey Oen, who is now at Pacific, kind of took me under her wing. She said she saw me as a future leader and served as a role model for me. What’s been really important for Mia and I is that all of our teammates have been so supportive of what we’re trying to do.

Q — What do you know now that you wish you had known as a freshman?

Q — You will be playing at the University of Washington next fall. What happened in your decision making process?

BRANSON — My thought was that I wanted to go to a place that not only had high intensity football, but great team culture. After seeing in high school what it could be like, I wanted to be in a similar type of safe and happy place that prioritized culture and team attitude.

UW is a very strong football program and I plan to major in business and management. My grandparents and several aunts and uncles are good UW graduates who have spoken a lot about the opportunities they had after college. I was able to meet many players on the team and they told me that the sports department provided strong academic support and that there was a good balance between athletics and academics.

Q — You also play on the cathedral beach volleyball team. How did this happen and did it have an effect on your football game?

BRANSON — I played beach volleyball for three years. I had played with Mia when we were younger and always enjoyed it. My sister, McKenna, was playing volleyball at Cathedral and suggested that I give it a try. It was fun and relaxing, overall a great experience. I plan to replay this spring.

I think it had a positive effect on my football. In beach volleyball you have to be quick and disjointed which certainly helped my reaction time on the soccer field. You also do a lot of conditioning in the sand which improved my speed.

Q — What was the most memorable part of your time at Cathedral Catholic?

BRANSON — The community. Everyone is so loving and tolerant and you are also surrounded by people with the same motivation and the same goals, academically and athletically. Being around other people who want to be successful is very motivating.

Translating this directly into football, we have a team that is so connected. Because of the club football situation, with players coming and going, it’s really hard for a lot of teams to have the kind of connection that we have.

We work hard and compete hard, but football in high school has shown me how enjoyable it is to play for each other.

Everyone wants to be here, wants to do it for each other, our coach and the seniors. You can have a team that isn’t necessarily the most athletically talented, but if you have the right culture and the right effort, you can still get the results you want.