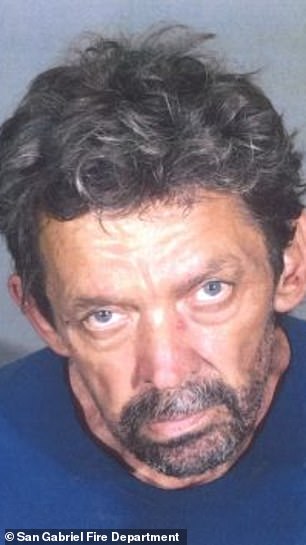 Suspect John David Corey, 57, also known as ‘Joker’, is accused of starting a fire at the San Gabriel Mission while it was undergoing renovations on July 11, 2020, to mark its upcoming 250th anniversary

Suspect John David Corey, 57, also known as ‘Joker’, is accused of starting a fire at the San Gabriel Mission on July 11, 2020 as it underwent renovations to mark its upcoming 250th celebration birthday.

More than 85 firefighters, 12 engine companies, five truck companies, four rescue ambulances and five battalion commanders were called to the scene of the blaze, according to the San Gabriel firefighters.

No one was injured in the blaze and response teams were able to stop the blaze before it reached the altar, museum and adjacent rectory, the department said.

“The loss to the mission was in the millions of dollars, but the loss to the community is immeasurable,” District Attorney George GascÃ³n said, Fox news reported.

The alleged arsonist is described as being from the San Gabriel Valley area, and he was initially arrested and sentenced to three years in prison in another more recent arson case in San Gabriel, according to firefighters.

“It was during this separate incident that investigators determined that Mr. Corey was a person of interest in the Mission San Gabriel affair,” the SGFD statement added. ‘

After a thorough investigation, investigators determined that Corey was responsible for the fire at the San Gabriel Mission. ‘

The charges against Corey include two counts of arson of an inhabited structure, first degree residential burglary and possession of flammable materials.

It was not immediately clear that the suspect had a legal representative.

A firefighter stands outside the San Gabriel Mission following a fire Saturday, July 11, 2020, in San Gabriel, California. The fire destroyed the roof and most of the interior of the nearly 250-year-old California church that was undergoing renovations

The interior of the San Gabriel Mission is damaged following an early morning fire on Saturday, July 11, 2020, in San Gabriel, California. No one was injured in the blaze and response teams were able to stop the blaze before it reached the altar, museum and adjacent rectory

The church was the fourth in a series of missions established across California by Serra during the time of Spanish colonization.

The Franciscan priest has long been praised by the church for bringing Roman Catholicism to what is now the western United States, but critics point to a darker side to his heritage.

By converting Native Americans to Catholicism, they said he forced them to abandon their culture or face brutal punishment.

Serra’s performances have been protested and vandalized over the years, and Pope Francis’ 2015 decision to elevate him to holiness has reopened old wounds.

More recently, protests focused on rights and the historic struggle of blacks and indigenous peoples have led activists to topple Serra statues in San Francisco, Sacramento and Los Angeles.

Selena Quezada, left, is hugged by her mother Cathy following an early morning fire at the San Gabriel Mission on Saturday, July 11, 2020, in San Gabriel, California

Police stepped up patrols and authorities stepped up security around the mission grounds about two weeks before the fire, she told the newspaper.

The interior wall of the church was redone a week before the first one as well.

The teams had just completed the installation of the benches as part of a larger renovation of the property to mark the anniversary of the mission’s founding in 1771, Huerta said.

The church was preparing to reopen after a four-month shutdown to slow the spread of the coronavirus.

The church, built of stone, brick and mortar, originally had a vaulted ceiling that was damaged by two earthquakes in the early 1800s, Huerta said last year.

The Franciscan Fathers replaced the ceiling with a paneled ceiling and the roof was last repaired following damage from the Northridge earthquake in 1994.