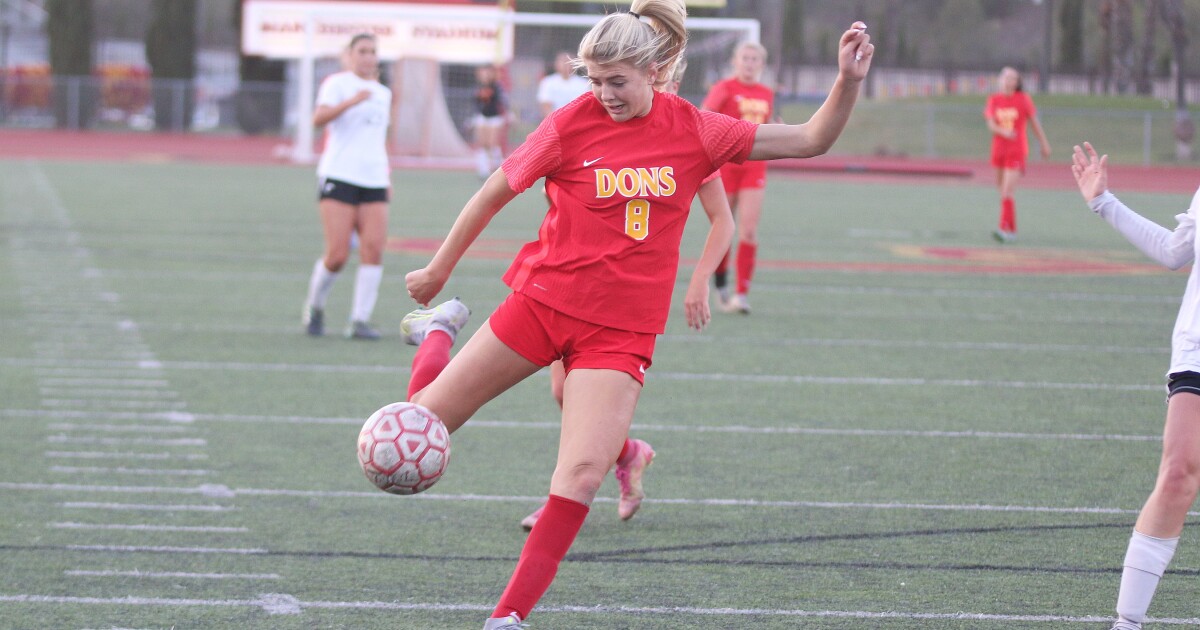 In perhaps the most unlikely result of the 2022 CIF Open Division women’s football quarter-finals, visiting seventh-seeded Westview stunned the No. 2 seed and 2020 sectional champion Cathedral Catholic in a penalty shootout on Wednesday night.

The win took Westview to 11-7-2 on the year and into next Tuesday’s CIF semi-final against third-seeded San Marcos, who knocked out defending champion La Costa Canyon in the first round. Cathedral Catholic’s season ended 21-3-2.

In a contest that featured 95 minutes (80 regulation time and 15 overtime) of scoreless football, the two teams combined to connect on 11 straight shots before host Dons’ sixth spot kick failed. barely skims the top of the crossbar to give Wolverines the surprising result.

For veteran head coach Dawn Lee, who has 10 seniors on her roster, it was a bitter pill to swallow. “Watching the game go down there was definitely frustrating, but the frustration isn’t really what I feel,” Lee said. “I just hurt because my seniors are such a cool bunch and it’s hard as a coach when you want it so badly for them because they’re such good kids.”

Anything can happen in football, but with his home field advantage, sterling record, league legacy (17 sectional titles as USDHS/Cathedral), early season win over Westview and second seed , there was no logical reason for Cathedral to enter Wednesday’s clash with anything. but trust.

Outwardly, everything seemed to be status quo, but there were hints that despite all the positives, the postseason might be more of a street fight than a cakewalk. In their final regular season game, on Senior Day on Feb. 10, the Dons, who allowed less than one goal per game this year, gave up three to Coronado for the second time in two weeks, allowing the Islanders to escape with a tie. Lee feared that with the added pressure of the post-season approaching, his club were playing well but not putting on full matches.

“Sometimes when we go out on fire but don’t get a result in the first 10-15 minutes, we get a little frustrated and seem to fall into conservative mode,” Lee said a day before the game. “Getting a goal early would be key for us.” The comments turned out to be prescient.

On Wednesday, for the most part, the Dons controlled the flow of play in the first half. They thwarted Westview defensively, created good chances early but couldn’t put anything away. In the closing stages of the first 40 minutes, however, it started to feel like Cathedral was pushing things a bit offensively.

At half-time, the Cathedral side’s mantra was ‘no need to panic, raise the energy level, play your game and the result will take care of itself’.

When action resumed, Cathedral continued to struggle with their attacking challenges and Westview continued to be Westview. Although they don’t play a particularly stylish brand of football, the Wolverines have a good size and physique, are very disciplined defensively, and have a certain pace and sneaky speed. This added to a package that created a major thorn in Cathedral Catholic’s side offensively. The Don midfielder was unable to consistently pass the ball to his forwards, the whole team seemed a step behind and lost too many one-on-one battles.

As his hosts struggled, one could feel Westview’s confidence and self-confidence. Even their followers seemed to pick up on their noise level and conviction. The Wolverines were even able to make a few deep forays into Cathedral territory. Still, neither team was able to score the opposing goal in the final 40 minutes of regulation time, meaning both teams would go into 15-minute overtime.

On the sidelines before the OT session, Lee made an impassioned plea to his players to pick up the pace, play freely and show the kind of courage sometimes needed to win grind-it-out, win-or-go-home matches. . like the one they faced.

The initial portions of overtime felt like a repeat of the first 80 minutes, but with around five minutes remaining, the Dons suddenly found another gear and started creating chances. In the last two minutes, a life-saving scenario materialized. Senior Brooke Miller created space for herself to throw a magnificent 23 yards. pass that landed five yards in front of the left post.

Cathedral’s top scorer, senior Kelsey Branson, advancing, met the ball with precision and placed a shot between the Westview goalkeeper and the post. Pandemonium ensued on the Cathedral side of the pitch but was quickly drowned out by a linesman’s offside flag.

After playing until the end of extra time, the winner would be determined by a penalty shootout. Never a perfect way to resolve a game of this magnitude, Westview’s ultimate triumph was met with shock and a stream of questions and comments, most centered on the controversial offside call. More relevant topics might have been “how did OTs and PKs come about and where was the furious last minute effort on the game body?” These are questions the ever-open Lee struggled with after the game.

“It’s not the first time we’ve seen this, it’s a piece of the puzzle that disappeared in the later stages of our season and we tried to figure it out,” Lee said. “I think a lot of it was just because there was so much pressure on these girls because they had started so well (won 16 of their first 17) and wanted it so badly.

“At some point when games got tight, instead of playing our usually reactive and aggressive style, we kind of went into a shell, started playing more passively, defensively. It’s something as a coach that I couldn’t understand. I try to instill in my players that it’s okay to make a mistake, it’s hard.

“There’s not much you can do before you start questioning yourself. Did I do the right things? It’s the most difficult thing in coaching. I’m super passionate about it and that’s why it hurts so much.

“I believe in the concept that you learn a lot more from a loss than a win and that as an athlete or a person, how you react to adversity is a real measure of who you are. We have a good chance of finding out.

Announcement of new Bishop of Galway – marking a new chapter for the Catholic Church in the West – Connacht Tribune – Galway City Tribune: