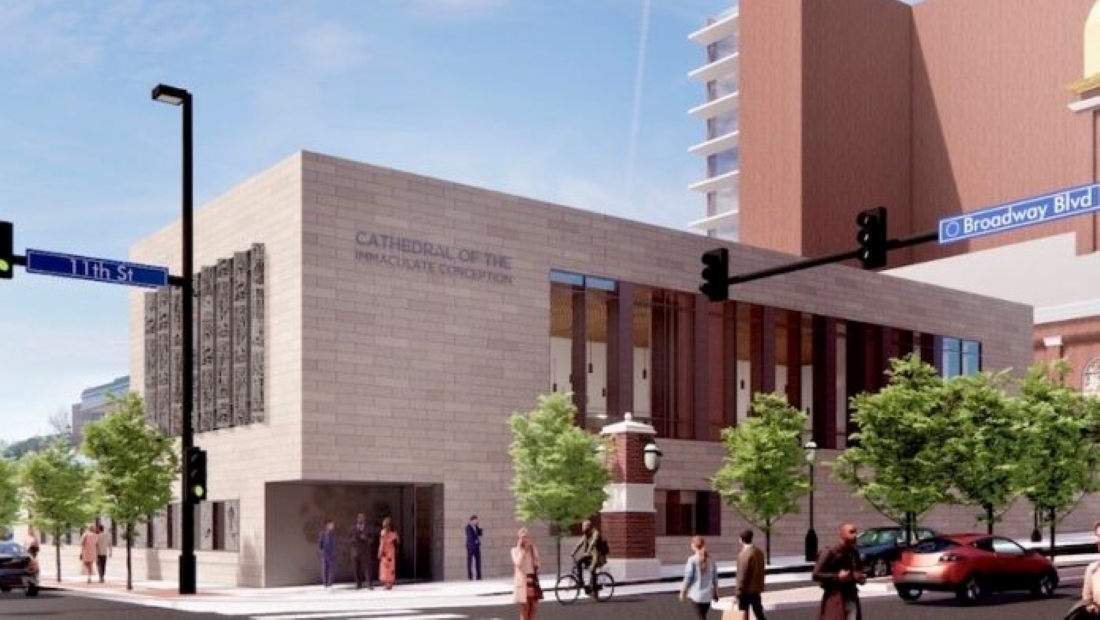 Image credit above: The Cathedral of the Immaculate Conception wants to build a new Donnelly Center at 11th and Broadway that would provide event space for parish offices. (Rendering | SFS Architecture)

The Cathedral of the Immaculate Conception, an iconic earlier church downtown, has launched a $14 million campaign to build a new church hall and renovate the space for its breakfast program for the homeless.

The brick cathedral at 11th Street and Broadway with its golden domed bell tower traces its roots to a log border church built on the site in 1835 by Jesuit missionaries. The current cathedral, seat of the Diocese of Kansas City-St. Joseph, opened in 1880.

The new facilities are intended to help the church continue to thrive in the 21st century, serving growing numbers of Catholics who are part of the downtown residential revival and continuing to provide meals to the homeless through his Morning Glory Ministries.

“We’re very proud of the Gold Dome on the skyline and feel like we’re part of the fabric of downtown,” said Reverend Paul Turner, parish priest at the Cathedral.

“The cathedral has been a place of worship, community service and faith-building, and we can offer all of this downtown.”

the “Building Glory” The campaign aims to fund the renovation of the existing rectory building located on 12th Street into a new home for Morning Glory. The program provides social services and a full breakfast to over 100 homeless people six days a week.

“This purpose-built facility will house all current services and planned mission expansions to help this population in need for decades to come,” according to the Building Glory website.

The Morning Glory program currently operates from Donnelly Hall on Broadway. The building was originally a parish school and was converted into community space, a prep kitchen and offices years ago.

The new Morning Glory facility is intended to provide a better experience for homeless people, who are currently queuing outside on Broadway before being admitted for breakfast. The new space will allow for shorter waits outside, according to the website.

The plan also calls for the demolition of the current Donnelly Hall and its replacement with a new Donnelly Hall connected to the cathedral which will include event space for 300-400 people, a visitor center and a gift shop.

The two-story, 13,000-square-foot building will also house parish offices, meeting rooms, a reception area, a bridal chamber, a catering kitchen and additional storage, according to the Building Glory website.

The new room is also intended as an “evangelization center” for the population of the city center.

“It will be an epicenter of Catholic education aimed primarily at the 30,000 new downtown residents, most of whom are in their 30s and 40s,” according to the website.

Turner said the cathedral has seen an influx of members alongside the growing downtown population of the last 10-15 years.

“We believe this will continue,” he said. “We are one of the few Catholic churches in the area where young adults like to worship. We have more members in the 20 to 30 age bracket than any other church. »

Turner said the church decided to raze the old Donnelly Hall rather than renovate it because of its deteriorated condition and an existing layout that did not meet the needs of the parish.

The architect is SFS Architecture and the contractor will be JE Dunn Construction.

The cathedral, however, by its nature as the center of a much larger Kansas diocese, has many additional visitors and worshipers.

“The nature of the cathedral is that it serves a larger purpose than people who come here regularly to worship,” Turner said.

As for the timing of the start of construction, the pastor said it depends on the success of the Building Glory campaign.

“We would like things to converge in 2022, but it will take a lot of fundraising,” he said.

Flatland contributor Kevin Collison is the founder of CityScene KC, an online source for downtown news and issues.

Thank you for subscribing!

Check your inbox, you should see something from us.