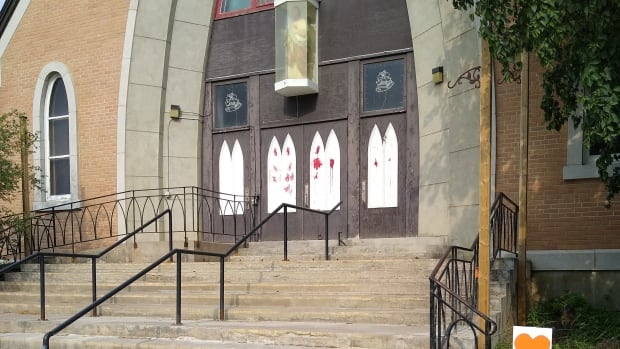 Red handprints appeared on the front doors of the Catholic Church in Fort Smith, Northwest Territories, but the parish priest said someone had already introduced themselves and was excused for the marks.

Cornelius Ngurukwem, the Reverend of St. Joseph’s Cathedral, told CBC News he was cutting the grass on Friday when he first noticed the footprints.

â€œI was confused, I didn’t know who had done such a thing,â€ he said.

There has been a wave of vandalism and arson targeting Catholic churches across Canada, following the discovery of what are believed to be anonymous graves belonging to children near former residential schools across the country . Statues of religious leaders and figures linked to Canada’s colonial past have also been painted red or demolished.

The vandalism at the cathedral comes just days after what police call a suspicious fire at St. Patrick’s Co-Cathedral Catholic Church in Yellowknife.

On Saturday morning, however, someone had already taken responsibility for it, Ngurukwem said.

“Someone walked up to me and recognized him and said he was so remorseful about it all and promised he was going to clean it up as fast as possible,” he said. he declares.

Ngurukwem did not ask the individual why he put red handprints on the doors in the first place, but he thinks it may have been out of emotion, he said.

â€œI really had to counsel him and give him spiritual food and also pray for him and really he was so remorseful,â€ he said. “I was kinda happy that someone came and grabbed it.”

Louise Beaulieu, a Fort Smith city councilor who is MÃ©tis, understands the anger people feel at the Catholic Church – but fire and vandalism are not the answer, she said.

Indigenous peoples must learn to deal with this story in a way that is not violent and fueled by anger, “because that doesn’t solve anything,” she said.

â€œIt was built by native people and it’s the part of history that I see in our community – who built the church and what it is, what it is used for today, rather than what happened with the residential homes and the school.

Support is available for anyone affected by the effects of residential schools and those triggered by the latest reports.

The Indian Residential School Survivors Society (IRSSS) can be contacted toll free at 1-800-721-0066.

A national residential school crisis line has been established to provide support to former students and those affected. People can access emotional and crisis referral services by calling the 24-hour national crisis line: 1-866-925-4419.

In the Yukon, mental health services are provided to residents of Whitehorse and rural Yukon communities through Mental Wellness and Addiction Services. Yukoners can schedule quick-access counseling services in Whitehorse and all MWSU community centers by calling 1-867-456-3838.