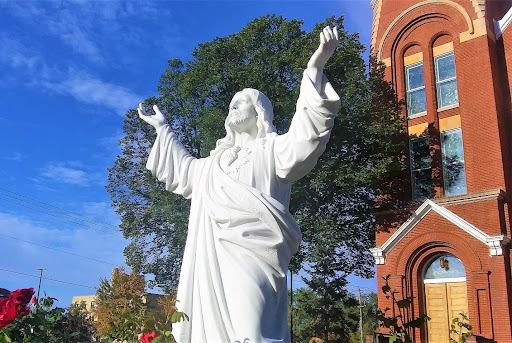 Christianity: a method behind the madness

Section Editor’s Note: This article includes topics that could be viewed as discriminatory and detrimental to certain identities, including members of the LGBTQ + community, especially the transgender community, as well as certain religious backgrounds. Freedom of speech is essential, and freedom of opinion – especially in this section – is important. That being said, this article does not represent the point of view of The Spectrum or the editorial team.

I was a guard at St. Mary’s Cathedral this summer when the statue of Jesus Christ was desecrated with black paint. My first reaction was anger, then curiosity, then finally pity for the person who disfigured him.

I was brought up in Roman Catholicity and have been to St. Mary’s Cathedral all my life. Therefore, I abdicate that I have a fair amount of information about Christianity to explain its main teaching and “the method behind the insanity”.

What is Christianity? Christianity is defined as a major religion that arose out of the life, teachings, death, and resurrection of Jesus of Nazareth. Yeah, duh. What does he teach?

Catholicism teaches that we must love one another, love ourselves and above all love the almighty being responsible for the creation of the world and all that it contains: God. The first enemy of God and of ourselves is Satan; The greatest Archangel of God who turned his back on God, believing that God’s next creation, humans, was too worthless a race to serve and protect.

As a Catholic, I must follow the rules God placed for us in the Ten Commandments given to Moses on Mount Sinai. Each commandment is to give up our own selfishness and take care of others.

Christianity as a whole in this society is commonly referred to as a religion that does not practice what it preaches; hate everyone he doesn’t agree with, including other religions, atheists, gays, transgender people, pro-choicers and of course, Satanists. Nothing could be further from the truth. We love them.

It is because we love them that we tirelessly pray to God to help them transform their lives by turning away from their current perspectives. But God does not force a change in them; they have to choose it themselves. This is the only way to help them the way we think they should be; if, and only if, they submit to the will and commandments of God.

Let me explain how Christians view the world from my personal experience. Christianity teaches not to attack blindly for no reason. You heard me right: we may not support the life decisions that others make, but we don’t hate them for it; those of us who do rebel against the faith we believe in. There is a world between â€œnot supportingâ€ and â€œhatingâ€.

As Christians we are taught and expected to love each other, especially those we do not understand. When you are hated, you have to love back. This includes loving gays, transgender people, atheists, pro-choice supporters, and even Satanists.

We don’t support their obvious life decisions, but help them find meaning. We believe that meaning can only be achieved by accepting a spiritual need, not a personal desire.

For example, we need food and water to survive. We need connectivity and good relationships with others to live. We need to know our limits, our gifts and our abilities. Most importantly, we must love others whom we do not understand, and this can only be accomplished through relationship and a continuous search for understanding God.

It is not our duty to preach fire and brimstone over the heads of sinners, or to mock and tease them. Our duty is to promote mercy, hope and redemption.

Getting back to the disparaged Jesus statue, all I can say now is that I believe it was an explosion of pent-up hatred for what the statue stood for. The reported assailant, Blair Whitten, had attacked him before, once placing a red wig on it and painting the spotlight red so that Jesus would appear in horrific red illumination at night. I know this for a fact because I cleaned the lights with a butter knife due to the heavy application of the paint.

I have no hatred towards the offender, only pity. I have no idea of â€‹â€‹the atrocities that occurred in his life or the decisions that led to this attack on a symbol of my faith, but I have learned to forgive him. I forgive him because it would be against my faith, my religious education, my personal morals and the teachings of Jesus if I didn’t.

I cannot speak for the spirit of every Christian, but I can speak for myself as one. My role is to respect and pray for those who think I would judge them. It is my duty not only as a Catholic, but as a human being. Thank you for your time.