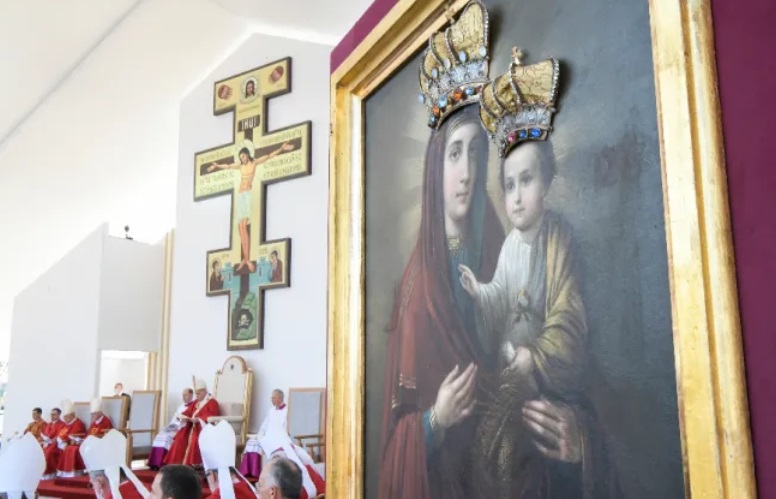 Christianity without the cross is “sterile”, declares Pope Francis during the Byzantine Divine Liturgy

On the feast of the Exaltation of the Holy Cross, Pope Francis celebrated the Byzantine Divine Liturgy and called Christianity without the Cross worldly and sterile.

By Courtney Mares
On the feast of the Exaltation of the Holy Cross, Pope Francis celebrated the Byzantine Divine Liturgy and called Christianity without the Cross worldly and sterile.

â€œCrucifixes are found all around us: on our necks, in houses, in cars, in pockets. What good is it if we do not stop to look at Jesus crucified and open our hearts to him, if we do not allow ourselves to be struck by the wounds he bears because of us, if our hearts do not swell with emotion and if we let us cry before the wounded God for love for us â€, declared Pope Francis in Slovakia on September 14th.

â€œThe witnesses of the Cross have only one strategy, that of the Master: humble love. They do not wait for triumphs here on earth, for they know that the love of Christ bears fruit in the events of daily life, renewing all things from within, like the seed that falls into the earth, dies and produces lots of fruit, â€he said. .

The Pope presided over a Divine Liturgy broadcast live in the Byzantine rite in PreÅ¡ov, eastern Slovakia, and delivered a homily in which he asked the question: Why did Jesus die on the cross?

“Why did he do that?” He could have saved his life, he could have kept his distance from the misery and brutality of human history â€, declared Pope Francis.

â€œInstead, he chose to enter this story, to immerse himself in it. This is why he chose the most difficult path possible: the Cross. So that no one on earth is ever to the point of not being able to find him, even there, in the midst of anguish, darkness, abandonment, the scandal of his own misery and his mistakes.

There, in the very place where we think God cannot be present, he has come. To save those who despair, he himself chooses to taste the despair; taking upon himself our bitterest anguish.

Pope Francis said that Jesus even experienced abandonment so that no one would ever be alone in their trials.

At the beginning of the Divine Liturgy, the Pope spent a moment in the prayerful veneration of the Cross.

A large Byzantine cross with three transverse arms hung above the outer altar of PreÅ¡ov, flanked by an icon of Mary, Mother of God, and the icon of Christ the Master.

â€œ’We proclaim the crucified Christâ€¦ the power of God and the wisdom of God.’ This is what Saint Paul tells us, but he does not hide the fact that, in terms of human wisdom, the Cross appears as something completely different: it is â€œscandalâ€ and â€œmadnessâ€ â€, declared the Pope in his homily.

â€œThe cross was an instrument of death, but it became the source of life. It was a horrible sight, but it revealed to us the beauty of God’s love. This is why, on today’s feast, the people of God venerate the Cross and the liturgy celebrates it.

The feast of the Exaltation of the Holy Cross dates back to the 4th century, when the solemn consecration of the Church of the Holy Sepulcher took place on September 13, 335, at the site of Christ’s crucifixion in Jerusalem.

â€œOne can not accept, except perhaps in words, a weak and crucified God, and instead prefer to dream of a powerful and triumphant God. It is a great temptation, â€said Pope Francis.

Pope Francis arrived at the Divine Liturgy in PreÅ¡ov in the popemobile, which passed through crowds of people standing in the streets waving Vatican flags. About 40,000 people attended the liturgy, according to local authorities.

PreÅ¡ov was part of the Kingdom of Hungary until the middle of the 20th century and is home to most of the 200,000 Byzantine Ruthenian Catholics in the country.

In April, Byzantine Catholics in Slovakia and around the world celebrated the 375th anniversary of the Union of Oujhorod, an agreement that brought the Ruthenian Orthodox Church into fellowship with the Pope after nearly six centuries of schism.

During the Divine Liturgy in PreÅ¡ov, Pope Francis recalled the testimony of the Byzantine Catholic priests and bishops of the Eparchy of PreÅ¡ov who were imprisoned and martyred by the Communist regime in the 1950s.

â€œHere I think of the martyrs who, in this nation, bore witness to the love of Christ in troubled times, when everything advised silence, shelter, not professing the faith. However, they could not help but testify â€, declared the Pope.

â€œHow many generous people suffered and died here in Slovakia for the name of Christ! Their testimony was given out of love for the one they had long contemplated. So much so that they looked like him even when they died.

Pope Francis said there is no shortage of opportunities for witnessing today if Christian witness is not weakened by worldliness and mediocrity.

â€œDear brothers and sisters, you have seen such witnesses. â€¦ Humble and simple people who gave their lives in love to the end. They are our heroes, the heroes of everyday existence, and their lives have changed history. Witnesses generate other witnesses, because they are life givers, â€he said.

â€œThis is how faith is spread: not with worldly power, but with the wisdom of the Cross; not with structures but with a testimony. Today, the Lord, from the eloquent silence of the Cross, asks us all … Do you want to be my witness?–CNA

Christianity without a cross is “sterile”, says pope in Slovakia