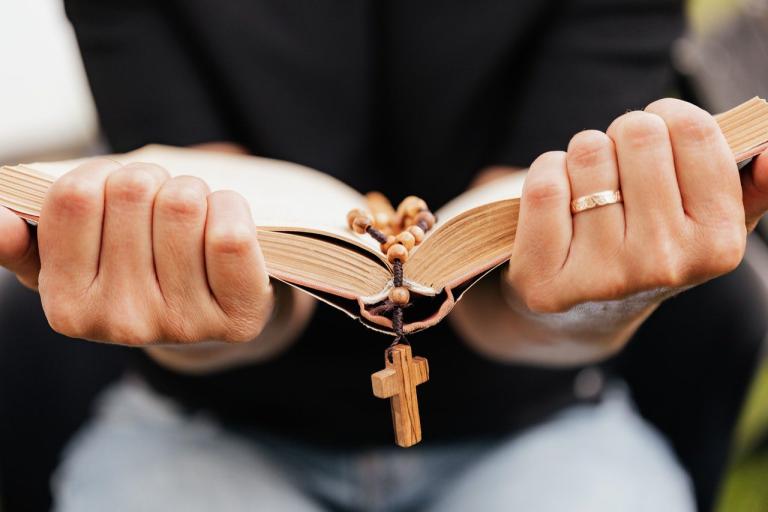 Doesn’t it always happen like this? You think you’ve got it all figured out in this wild ride of a lifetime, then another curve ball comes your way and you realize, “Oh woo-wee-woo, I was way off”? The good old story of repentance (rethinking everything) and ego checking, right? Well, let me tell you a little story of my journey from growing up Mormon, finding my way to evangelism, and then breaking free (that’s what I thought ) in progressive Christianity. Back and forth – a layman’s account of the journey through this crazy religion called American Christianity (Bilbo Baggins has nothing against me, okay?).

Now, before I get to the nitty-gritty, let me say that when I say American Christianity, I come from the perspective of how Christianity in America has become more American than Christlike. As a citizen of the United States and a student of the Jesus tradition, I have seen some interesting “stuff,” to say the least. Not to say that America is that hopeless place where the devil rules and Hollywood elites conquer anyone who gets in their way (relax my conservative pals). Also, I’m not saying America is a horrible nation because of its history with racism and colonialism (breathe, my progressive friends). America as a country has some amazing qualities and some major flaws (like all countries, right?).

All I’m saying here is that as far as the Christian religion in America goes, it’s been more of an American religion mascot (civil religion) rather than a counter-cultural movement. Alas, I guess it’s hard to find the way of jesus in our current Western cultural climate… but that’s okay! I believe it (i.e. the Gospel) is, has been and always has been an invitation to all cultures…we all just need to get into that seeker mindset to do the experience.

Ok, back to my story through my time in American denominational Christianity and how that formed and shaped my experience with Christ. Look, I’m going to be as “graceful” as possible here. Disclaimer: These stories I have experienced are more about issues with isms than the people. It is in the same spirit as what Brian Zahnd wrote in his new book When everything is on fire

Luckily (I know it’s not everyone’s experience) I’m in a place with no regrets and only have gratitude for the things I’ve seen on this loopy train I call American Christianity.

Like most Americans, we all have some type of Judeo-Christian influence in our early upbringing. My cup of tea (or poison, depending on how you look at it) was the Mormon faith. Both of my parents converted at an early age and never looked back. We were full members of The Church of Jesus Christ of Latter-day Saints. My parents still have their temple recommend and serve a couple’s mission in Cancun, Mexico (enjoying a non-alcoholic margarita and helping the poor). Of my four siblings and I, only one is still an active member of the church.

All the rest of us, I guess, fall into the no and done Category. Mormonism has its problems (as do all sects of Christianity). Many Christians consider them not part of the Jesus tradition for various reasons – mainly due to the fact that all of Jesus is not God and is literally our older brother – but I don’t know? Yes, throughout my history growing up in this faith, I have had strange and unhealthy encounters.

Take, for example, the Bishop interviews. No one should ask you if you’re in control, no matter how “holy” the setting is (religious trauma, anyone?). But I also had Jesus moments – like having my Pops lay hands on me when I got chickenpox and feeling that healing spirit. So who am I to say that some people within the Mormon faith are not part of TheWay (again, it’s about the people, not the isms)? Anyway, I never really tried to dig into my faith growing up. I finally stopped participating in my late teens and never thought about Mormonism until I met my future wife. We dated for about six months, she got pregnant (sex before marriage… sinners!?), and we were both still in college.

I decided to go back to my Christian roots (I guess big life events have that effect). My wife was part of a large mega-church in North County, San Diego at the time. Wow what an experience the mega church has been. Such a different atmosphere from Mormonism. You had fog lights, flip flops, Hawaiian shirts, rock bands, free coffee, big screens, and altar calls. In a way, it was liberating compared to my other experience in Mormonism. But Mormons always say, “We are the true Church,” so I wanted to dig into the Mormon faith to put that to the test. What I found wasn’t that great, to say the least. I don’t want to go into detail here because of “the Internet,” but long story short, I felt like I hadn’t been told the whole truth about the history of Mormonism and its founder Joseph Smith. It was hard to say, to say the least, but I felt like I had found the “truth” in my evangelical church…until I started digging into their history as well.

In the end, it was more a problem with the fundamentalist aspect of their doctrinal position. Eternal conscious torment, penal substitute atonement, and original sin are God-ordained truth, and if you disagree, you are on a slippery slope to heresy. Now, I’ve never been accused of “heresies” (probably because I haven’t really gone into email conversations with head pastors…mega-church, remember?), but I think that it was more listening to the sermon every Sunday and seeing these doctrines seeping out, it was just a little too much for me to get bogged down. I’m not trying to tell my kids, “Jesus loves you, but if you don’t love him back, he’ll burn you forever” (I know it’s not that simple, but you understand my drift).

After 3 years of evangelism, I was over the “church” because what I saw was just a small group of people trying to control the masses (God damn oligarchy). Damn this mess. I also realized that a lot of the way it was presented was more conservative presentation (similar to what I have seen of Mormonism). So I went to the desert for the next two years and deconstructed my faith. Talk about the dark night of the soul. He was a two-year-old schizophrenic, Lordy Lord! Atheist one day, agnostic the next (which I still am sometimes, so it works). All seemed lost until… drum roll, please… Progressive Christianity! Dude, what a breath of fresh air! I walked into a mainline church and didn’t feel judged for my interpretations of what that faith was.

For the next four years, I made it my home. I even started a small ministry called Hazy Divinity – where I brewed home brew with my pastor and talked creatively about theology. Damn, I was even on the board as an Elder. I was at Flynn, and it was great! Until that is no longer the case. Covid hit, and everything changed. It’s been a shit show for the past two years, and what was my progressive church doing? Their part, I suppose. Look, they did and still do great things. That simply shouldn’t be the only option Jesus’ people could choose from. Let’s say I felt like I was more part of the Democratic Party than the church of Jesus. It is not that in itself that is good or bad. I just think we need more balance.

It’s a divided landscape right now in this country. Participating in the us versus them paradigm only makes things worse. Progressive Christianity seems to be another dualistic way of “doing” the church. Yes, I’m all for inclusion with all walks of life – but progressive Christianity seems to be becoming just another club that, whether it realizes it or not, has shut out other groups. I’m not trying to preach some kind of “bothsideism”, but maybe “allsideism”? Didn’t Jesus eat with Pharisees and prostitutes? Didn’t he make disciples of Simon the fanatic and Matthew the tax collector? I didn’t see that kind of diversity. My soul couldn’t hold on. I had to get away from my progressive church and go back to the desert…

Enlightenment is not the be-all and end-all of reality. Traditionalism is not the foundation that never weakens. How about we learn to dance with Grace? It always seems to come down to this: are we really going to love each other despite all the relationship challenges (from personal to communal)? A church can so easily fall into the trap of groupthink, which will always end up causing division instead of unity in adversity. Right now, isn’t the most counter-cultural thing to do as “Christians” to unite despite all our differences? Sounds pretty un-American to me (no pun intended).

Call of the Bishop to the Cathedral Club