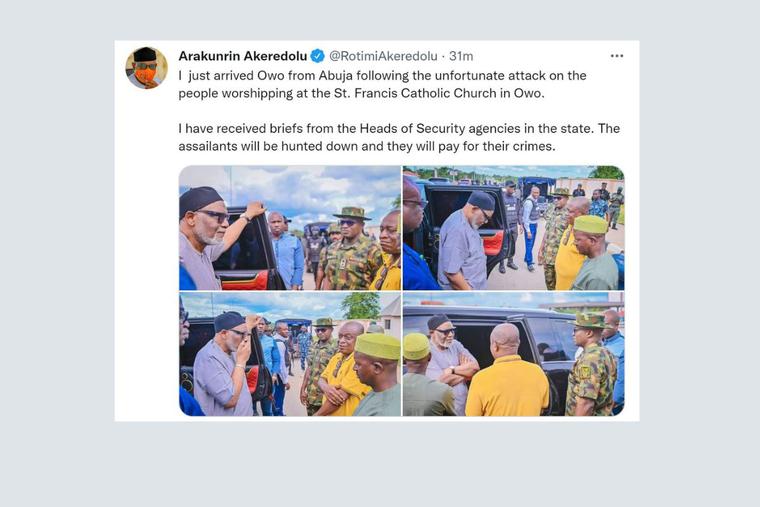 At least 50 people were killed and others injured on Sunday when gunmen attacked worshipers at a Catholic church in southwestern Nigeria, according to media reports.

A doctor at a hospital in Owo, a town in Nigeria’s Ondo state, said Reuters that as many as 50 bodies had been transferred to Federal Medical Center in Owo and St. Louis Catholic Hospital.

The attack took place during a Pentecost Sunday service at St. Francis Catholic Church in Owo, according to Ondo Governor Arakunrin Akeredolu.

A video posted to Twitter showed graphic scenes of bodies and blood inside the church. Akeredolu said many children were among the dead.

“I am deeply saddened by the unprovoked attack and murder of innocent people from Owo, who worship at St. Francis Catholic Church today,” the governor said in a tweet. “The vile and satanic attack is a calculated assault on the peace-loving people of Owo Kingdom who have enjoyed relative peace over the years.”

The Vatican released a statement on Sunday after Pope Francis learned of the attack.

“The Pope has learned of the attack on the church in Ondo, Nigeria, and the death of dozens of faithful, including many children, during the celebration of Pentecost,” the statement said. “As the details of the incident are clarified, Pope Francis prays for the victims and for the country, painfully affected in a moment of celebration, and entrusts both to the Lord, to send his Spirit to comfort them.”

Nina Shea, a human rights lawyer and religious freedom expert at the Hudson Institute, a think tank and research center in Washington, D.C., told CNA on Sunday that “warrior-style” attacks on Catholics and other Christians are stepping up in Nigeria. Yet most of this violence, so far, has been concentrated in northern Nigeria, while the southwestern part of the country where Sunday’s attack took place has remained relatively peaceful.

“This massacre in a church full of Sunday worshipers is an atrocity we have seen repeatedly in northern Nigeria over the years. It was the work of Islamist extremists,” Shea said.

“As the facts about today’s massacre continue to emerge, it is clear that large-scale, warlike attacks on Catholics and other Christians are spreading in a system of impunity,” he said. she continued. “The Buhari government has allowed this to continue unabated and fails to protect the churches in Nigeria. This government passivity is seen as a green light for extremists to target Christians.

“The kidnappings and murders of priests and pastors, the enslavement of Christian girls and mob lynchings for alleged blasphemy against Islam” have intensified since the Biden administration removed Nigeria from the list of ” countries of concern” (CPC) of the United States where blatant religions persecution is taking place, Shea said.

“[Blinken] must face up to this crisis, stop making excuses for it on the basis of climate change talk and nominate Nigeria as a CPC. Anything less is inadmissible,” she said.

Shea added, “Innocent and helpless clerics are being slaughtered en masse in an aggressive assault, even in areas like today’s attack, where peaceful conditions once prevailed.”

CNA correspondent at the Vatican, Courtney Mares, contributed to this story.

I am deeply saddened by the unprovoked attack and murder of innocent Owo worshipers at St. Francis Catholic Church today.

The vile and satanic attack is a calculated attack on the peace-loving people of the Owo Kingdom who have enjoyed relative peace over the years. pic.twitter.com/30fMbfnOxc

I spoke to the Bishop of the Catholic Diocese of Ondo, Bishop Jude Arogundade, who is currently on his way to Owo. Likewise, I had to cut short my party’s national mission in Abuja and visit Owo immediately.

This developing story was updated after publication.