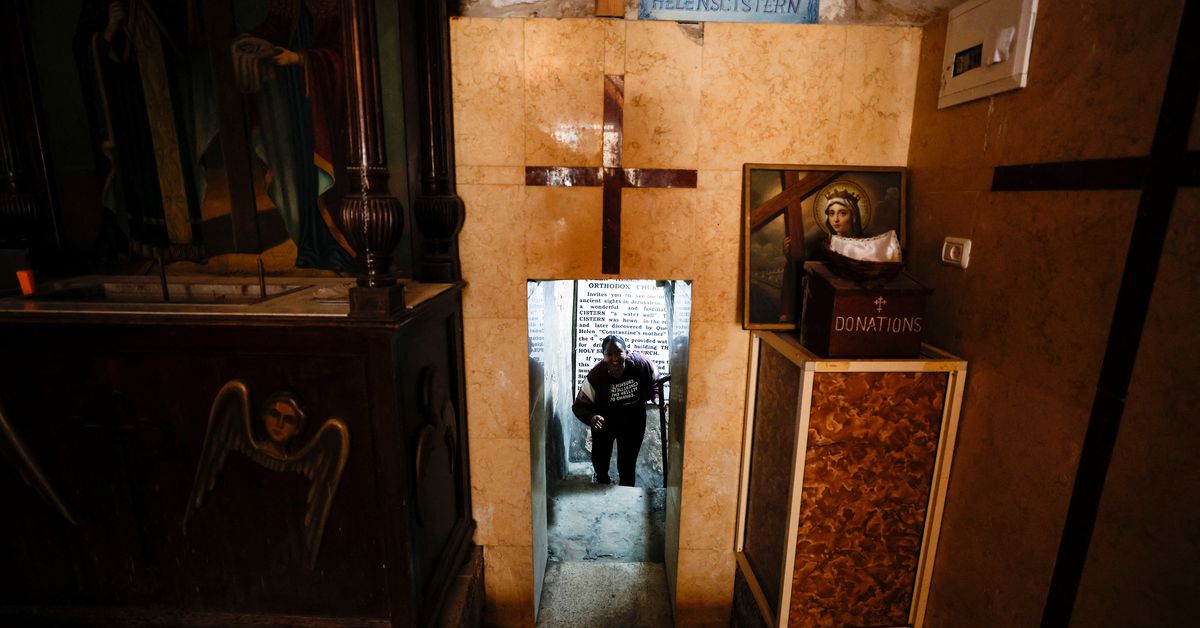 JERUSALEM, April 23 (Reuters) – A few steps from Jerusalem’s Church of the Holy Sepulcher, a small opening leads to an underground cistern where clerics have found the perfect spot to practice chanting ahead of the holiest day of the Christian calendar.

As the Eastern churches prepared to celebrate Easter a week after the Roman Catholic celebration, Barakat al-Masri stood deep beneath the Coptic Orthodox Church of Saint Helena, singing hymns in Coptic and Arabic.

The cistern doesn’t look like much, but al-Masri, the cantor of the Coptic church, says the sound it makes is unique.

“There is an echo,” the 35-year-old Egyptian-born Coptic language and music student told Reuters at the bottom of a winding underground staircase as Holy Week approached.

“A lot of people come here and record themselves singing because the sound is like you’re in a studio, maybe even better.”

“Coptic melodies are among the treasures of the church. They were handed down to us by our ancestors as early as the first century,” he said.

“I save here as much as possible.”

The cistern is named after Saint Helena, the mother of Constantine, who was the first Roman emperor to embrace Christianity.

According to historical accounts, the Church of the Holy Sepulcher was built in the fourth century, after the site was visited and claimed to be the place where Jesus was crucified and resurrected.

A woman climbs the stairs of a cistern which, according to Jerusalem tourist guide Bashar Abu Shamsiyeh, was used for water when the Church of the Holy Sepulcher was built in the 4th century, and is now used to record Christian hymns due to its acoustic quality, in the Coptic Orthodox Church of Saint Helena in the Old City of Jerusalem, April 14, 2022. Picture taken April 14, 2022. REUTERS/Ammar Awad

Saints and some of the early Christians relied on water from the cistern during the construction of the church, “making the water holy,” said Jerusalem tour guide Bashar Abu Shamsiyeh.

The water channels that filled it are now closed and the cistern is no longer in use, he said. But the church keeps it open to visitors, even though it’s off the usual tourist trail.

“This is the first time someone has brought us here,” said Gabi Rahil, 70, a Palestinian Christian from Bethlehem in the occupied West Bank.

“They could use some lights,” he muttered as he descended the slippery, dimly lit stairs before realizing his voice was echoing.

“I was expecting a small well or something. I didn’t expect an underground cave,” said Kyna Finch, 25, a British tourist.

“It feels like a very special, peaceful place away from the hustle and bustle outside,” she added. “We saw a lot of people coming in that direction so we decided to check it out.”

Jorge Cases, 36, a Spanish tourist, said he discovered the cistern by accident.

“I’m surprised I haven’t even seen it pop up anywhere while reading and researching (this trip),” he said. “It’s a pretty magical place.”

He tested the echo to the rhythm of water dripping from the ceiling, first humming, then clapping, then whistling.

Reporting by Henriette Chacar and Nisreen Salem in Jerusalem; Editing by Stephen Farrell and Andrew Heavens

In “Remnant Christianity”, the author offers solutions on how Christianity can adapt and adjust in a postmodern world