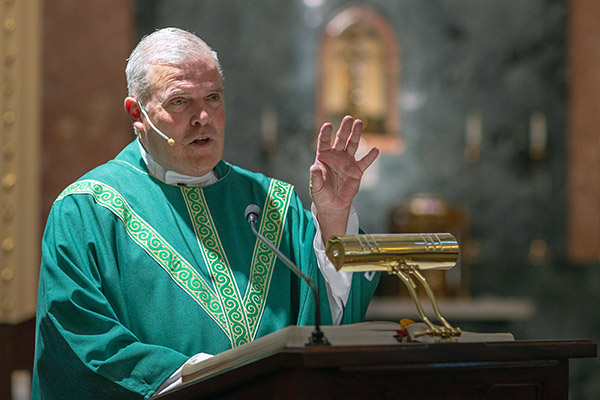 Father Fisher considers being rector of the cathedral a privilege

CAMDEN – In his final week as parish rector of Immaculate Conception Cathedral, Fr John Fisher, OSFS, thanked the women and men of the city and diocese for “their presence and their faith …on display 24/7,” calling all of them “a great blessing.

Completing his six-year term as rector at the end of June, Father Fisher wrote a letter to parishioners: “I feel the Lord is calling me to accept leadership in another parish where Oblates serve. The decision was “made after much discernment, prayer and consultation”.

Effective July 1, Father Fisher became pastor of Our Mother of Consolation Parish in Chestnut Hill, Pennsylvania, by decision of the Oblates of St. Francis de Sales. Father Adam J. Cichoski, vocations director for the Diocese of Camden, has been named rector.

The Oblates have ministered at Cathedral Parish for the past 14 years, beginning with Father Matthew Hillyard OSFS, Rector from 2008 to 2016. Father Michael McCue, OSFS, and Brother Mickey McGrath, OSFS, have served in ministry at Cathedral Parish and around the region for almost as long. Father McCue and Brother Mickey will continue to serve in the diocese and beyond, but will no longer be in residence at the cathedral.

Oblate for 45 years – 34 as a priest – Father Fisher, born in northeast Philadelphia, spent his early days as a teacher in various high schools and colleges before deciding to branch out after days of structured classes and classroom activities.

“I didn’t want any control; I wanted to let go,” he said, explaining that he was seeking guidance from the Lord.

He found this unpredictability in downtown Camden.

“Although you have an idea of ​​what can happen every day, you are not really sure. Someone may knock on the door, you may be called to the hospital, called to someone’s house, or find out that the roof is leaking. The beauty of it, however, is that you preach every day and the prayer life intensifies,” he said, adding that preaching includes both inside and outside the church walls.

He said he felt privileged to be in Camden, presiding over masses, weddings, funerals, baptisms and having close relationships with many people at the cathedral – which serves both the English and Spanish speaking communities – and Saint Joseph Church, a place of parish worship and seat of the Polish Catholic apostolate of the diocese.

“The people here are phenomenal. I walked with them – I know where they sat [in the pews], and I know their stories. Being there for them was a great blessing. All of these moments of grace are ways the Lord has continued to touch my heart,” he said.

Father Fisher, who acknowledges having great devotion to the Blessed Mother since childhood, said he was inspired by the diversity of the community. Many have brought to the parish their cultural backgrounds from regions such as Latin America, Mexico, Puerto Rico and Poland – as well as their own Marian traditions.

“To see the Blessed Mother in [devotions such as] Guadalupe, Altagracia, Providencia and Czestochowa have been great,” he said.

Spending more than half a decade in Camden, a town where ‘so many people live on the fringes’, Father Fisher said he was ‘raised by the faith’ of his flock, which continually showed strength. love for his neighbors through acts such as preparing meals, packing food and collecting diapers for young families.

During the COVID-19 lockdown, he was particularly moved by the weekly parish collection envelopes that appeared under his door, even when in-person liturgies stopped due to health concerns.

“Their generosity warmed my heart,” he said.

Father Fisher said he leaves Camden with a grateful heart and thanks Bishop Dennis Sullivan for supporting Oblate ministry. Oblates have a long history in Camden of helping others “encounter Christ in word, sacrament and each other [in order to] create hope and peace for our community and our world,” he said. “[We are] grateful to have the opportunity to serve at the Cathedral for the past 14 years, all great blessings.

Will the Catholic Church’s Debate on Ordained Women Force Pope Francis to Break the Glass Ceiling?