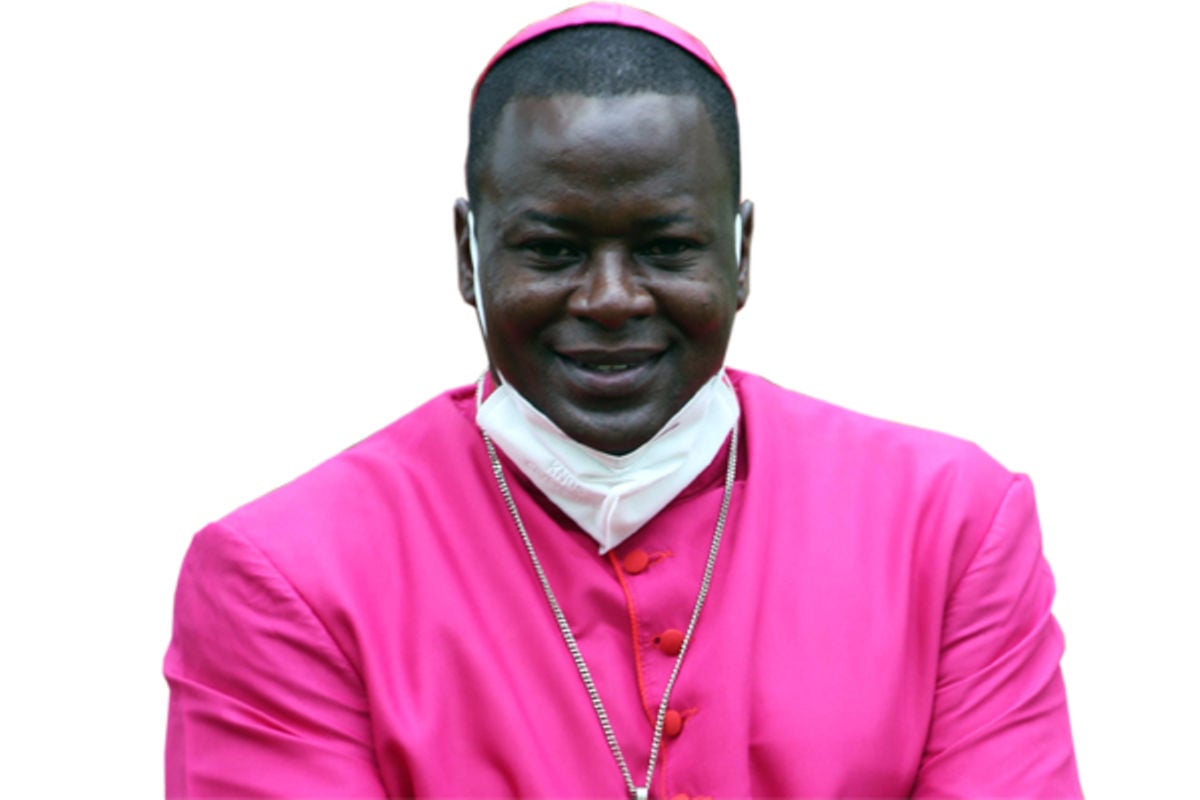 Father Kibuuka: Why I broke ties with the Catholic Church

It is a Thursday afternoon that I face the dusty grounds of the village of Jjanda in the district of Namugongo-Wakiso to meet the priest recently beatified to become bishop.

To arrange the interview, Bishop Jacinto Kibuuka is only a phone call away from his personal media assistant. At his new pastoral station, it becomes immediately apparent that the man of God has many people vying for his attention.

“I’m glad you’re here but I apologize for not looking after you because I have to look after many Christians after a busy day. Please don’t worry about transportation as I have requested Alex, my driver, to take you back to the office,” he humbly apologizes.

My next appointment is penciled in for a Saturday afternoon. I endure the same journey. The second meeting gives me the opportunity to have another look at the place and to exchange with the people who live with the man of God.

What I didn’t see initially was that the place has a lot of the same things as the Roman Catholic Church. Paintings signifying the Stations of the Cross, an emerging grotto and cross, and most importantly, an altar before which many arriving Christians bow before making the sign of the cross.

This time, I get an audience with Bishop Kibuuka who gives me a broad smile to welcome me.
“You look hungry,” he asks me half in Luganda before placing an order for me through one of his assistants.

The help must now go to a restaurant which is a few kilometers away. Clearly, this affable man of God – who also studied psychology – is trying to buy time to tend to his flock. When we finally get to the interview, two hours later, his story about the controversial departure from the Roman Catholic Church in 2016 feels eerily familiar.

He begins by telling me about his childhood, the time when he was a priest in the Roman Catholic Church and how he ended up in Mamré. This follows his dismissal by a man who educated him at university level, housed him and mentored him. So, is he still a priest?

“I am a priest and it is a gift that cannot be taken away from me, and I am a Catholic, even though I have ceased to adhere to the Roman Catholic sect”, he explains.
Dressed in liturgical vestments, Bishop Kibuuka opens up about his departure from the highest religious attire.

He says he was removed from his position in a strange way.
Asked to stay away from any pastoral activity and sentenced to 10 years in what he describes as a “solitary” establishment in Ggoli without a telephone, Bishop Kibuuka still seems hurt. He is currently the head of the Eastern Orthodox Church of Antioch in Uganda.

leave catholicism
It was in 2016 when a woman identified as Winfred Nantongo came out in the media to say she was involved in a sexual relationship with Father Kibuuka. When the woman apologized for tarnishing Father Kibuuka’s image, it was supposed to end the story. He does not have.

“I was expelled from the Church on unsubstantiated allegations and the decision was blocked because my accusers had no evidence against me,” he says, adding: “At one point, I remember ‘a monsignor, who wrote a dossier which he read in my presence. Part of it stated that I should be expelled from the country.

After being transferred from Rubaga to Bukalango, he was granted administrative leave.

“Cardinal [Emmanuel] Wamala and Bishop Kakooza intervened many times to block my dismissal, but at some point it got away from them,” he recalls.

One day, November 14, 2014, particularly stood out. Summoned to the archdiocese, he was relieved of his duties. Less than an hour after his suspension, Archbishop of Kampala Cyprian Kizito Lwanga (RIP) revoked the decision.

Sentenced to solitary confinement
Before his dismissal in July 2016, Kibuuka says he saw it coming. This inevitability forced him to plan his exit. Bishop Kibuuka notes that he received a letter from Bishop Lwanga indicating that he had been relieved of his pastoral duties. The letter also allegedly ordered him to go and remain incommunicado at Ggoli convent in Mpigi district in a Roman Catholic facility for 10 years.

All he could think of at the time was his elderly mother. When he was ordained a priest, Bishop Kibuuka was greeted with a lot of responsibility.
“At the time I was 37 and that meant I would be serving time for a crime I hadn’t known existed for 10 years and would return at 47.

My mother, friends, family and dependents would be badly affected,” he says, adding, “The only person who knows why I was expelled from the Roman Catholic Church is Archbishop Lwanga, but I forgave him and took another path to serve God.

talk about being single
When he stood before the tabernacle in 2008, Bishop Kibuuka agreed to serve God. He adds that he respected and observed celibacy all his years at the altar of the Roman Catholic Church.

“Many church leaders practice celibacy during the day, but the most important thing is to be true to yourself. We should stay away from pretense,” he says, adding, “There are two things you can’t hide: love and drunkenness.

He says that the writings of the apostle Paul on the subject are explicit. Paul specifies that “those who marry are not guilty of sin; those who burn with sexual passion should get married instead of being in a constant struggle with immorality.

The road ahead
Before falling into a stalemate in the Roman Catholic Church, Bishop Kibuuka knew the worst was about to happen. So, on June 31, 2016, he decided that he was going to remain a servant of God. This is how the idea of ​​the Prayer Center of Mamré was born, which he created discreetly. He was soon joined by two priests. We would later return to the Roman Catholic Church.

He says the prayer center which has spawned churches in all parts of the country was started with 20 million shillings raised by Christians to buy seven acres of land in Namugongo.
The prayer center now has 33 priests, nuns, hundreds of catechists, 60 seminarians and thousands of faithful. He says that soon a church building will be established, along with other branches of the Antiochian Rite, which is apostolic in nature. He also established a seminary that trains priests and other religious leaders.

Growing up
Unlike many homes in their village of Ssemukombe in Mpigi District, Bishop Kibuuka did not grow up in a mud and acacia hut. His parents, he adds, worked hard to care for their children. Her best childhood memory was when Cardinal Emmanuel Nsubuga came to their village to command Kawumba sub-parish, which was her childhood church.
The cardinal showed up at 8 p.m., 11 hours after he was originally expected. Not that it dampened the moods.
“The Cardinal arrived in a red Benz and we asked the driver to turn off the engine and we drove him to the church,” he recalled, adding: “The Cardinal was dressed in a long dress and I remember people calling him “Kapamaanya” and there were boys holding him like peg boys.”

Join the Priesthood
Remarkably, a smoke pipe is what prompted Bishop Kibuuka to join the priesthood. Well, in a way. He was always intrigued to see his father smoking a pipe. His grandfather, however, forbade him to touch the smoke pipe.
However, when a Father John of the Missionaries of Africa showed up with another on a visit to their home church, Bishop Kibuuka gave in to his temptations.

“I asked Father John to allow me to touch his smoke pipe and when my mother saw me she beat me,” he recalled, adding: “The priest stopped her. saw my very humble mother in the presence of a priest and realized that being a priest was a special gift.

He also reveals that at one point he considered becoming a politician and was inspired by President Museveni and former army commander General Mugisha Muntu.

Bishop Jacinto Kibuuka is the 7th child in the family of eight children of the late Richard Francis Kalyesubula and Mary Leticia Nantume Kalyesubula of Ssemukombe-Mawokota in Mpigi District.

Born on August 17, 1978, he studied at St Theresa Kawumba and later joined St Balikuddembe Mitala Maria for secondary education. He went through St Mbaaga Seminary, where he studied philosophy and theology and other studies.
After being ordained a Catholic priest in 2008 at Rubaga Cathedral in Kampala, Kibuuka earned a master’s degree in health education and promotion from Nkozi University.
On November 12, 2017, he was ordained as the first Bishop of the Central and Eastern Orthodox Church of Antioch at its Mamre International Prayer Center in Namugongo, Wakiso District.
Kibuuka, who currently heads the Mamre Prayer Center, is also the head of the Eastern Orthodox Church of Antioch in Uganda.