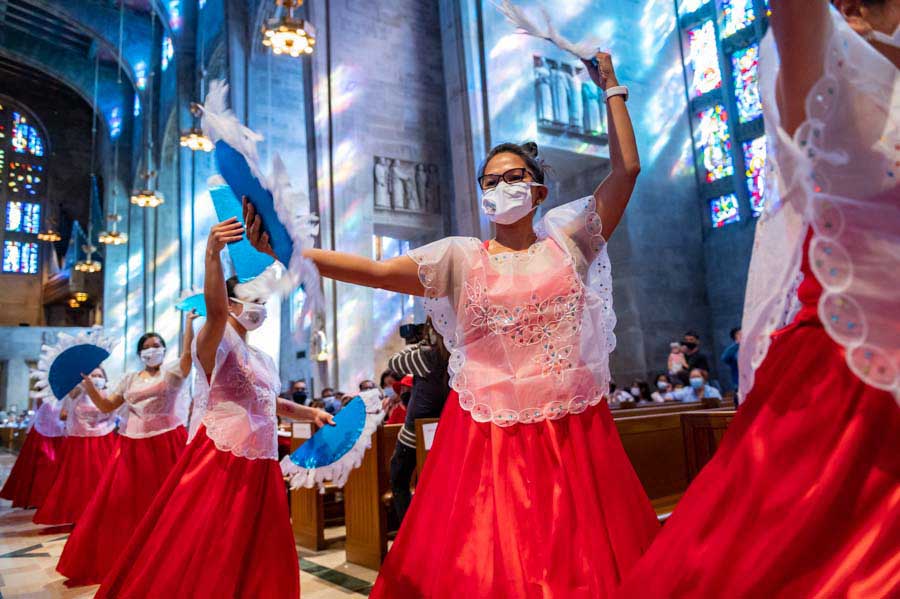 Holding a statue of baby Jesus high above her head, 18-year-old Gabby Gonzalez happily walked the long central aisle of the Cathedral of Mary Our Queen on September 26. Traditional Filipino “Sinulog” dancers swayed gently to catchy music behind her. , waving blue fans decorated with feathers.

Cries of “Viva Santo Niño”, “Long live the Child Jesus,” could be heard over the music once the group reached the shrine – a jubilant celebration that continued as a group of men carried statues of Saint Lorenzo Ruiz and Saint Pedro Calungsod, two beloved Filipino saints.

The festive display of cultural pride helped mark a milestone in the Filipino community: the commemoration of 500 years of Christianity in the Philippines. Archbishop William E. Lori celebrated mass at the 11th celebration of the Feast of Archdiocesan Saints at the Fatherland Cathedral.

Christianity was introduced to the Philippines during a Spanish expedition led by Portuguese explorer Ferdinand Magellan. On April 14, 1521, the Spanish missionary Pedro Valderrama, chaplain of the Magellan expedition, baptized 800 Cebuanos, including the chief Rajah Humabon (baptized Don Carlos) and his wife, Hara Humamay (baptized Juana).

As a baptismal gift, Magellan presented the chief and his wife with an image of the Baby Jesus, who is now worshiped in the Minore del Santo Niño Basilica in Cebu in Cebu City, Philippines.

John Smith, president for six consecutive years of the Archdiocesan Council of the Philippines and parishioner of Christ the King in Glen Burnie, noted that the Philippines is named after the Spanish King Philip II.

“The Spaniards are the ones who united all the islands under one faith,” Smith said.

Erwin Lacanienta, Grand Knight of the Santo Niño Council of the Knights of Columbus, said the Spanish have helped instill a love of faith among the Filipino people. Lacanienta said he was proud to wear his “Tagalog barong”, a symbolic outfit for male Filipinos with long sleeves and made of a transparent material. During the Spanish colonization, it was “an instrument of oppression”, declared Lacanienta.

“The Spaniards made the Filipinos wear it to easily see if they were carrying guns or such tools,” he explained. “Now it’s a symbol of social justice, we wear a barong to remember our ancestors and what they went through. Family and faith is what gets you through.

A native of Quezon City, Philippines, and a parishioner of the Immaculate Heart of Mary in Baynesville, Lacanienta said her mother was instrumental in her faith.

“Faith is so strong because it is passed down through generations by being active,” he said.

About 1,200 members of the Filipino community, local and foreign, gathered for the Special Mass, which was celebrated in English and Tagalog. After the liturgy, the congregation gathered around the church and gathered on the patio of the cathedral with entertainment and typical Philippine dishes, including lechon and lumpia.

Although the Spanish evangelized the Philippines, today the Filipinos evangelize the rest of the world. One such example is Father Pete D. Literal, pastor of Saint John the Evangelist in Hydes. A native of Naujan, Philippines, he was ordained in the Archdiocese of Lipa, Philippines, in 1978 and came to the United States in 1987 as a chaplain for the federal prison system. In 2016, he was incardinated in the Archdiocese of Baltimore. The Literal Father was one of the main organizers of the Feast of the Two Saints.

“Filipino families around the world cherish the Catholic faith through their devotions,” he said. “Their family life is the life of the church.

Some of these devotions are Bayanihan, the helping spirit; Simbang Gabi, a novena for Christmas; and in Baltimore City, the Triduum, three nights of prayer and sharing a witness of faith the week before the celebration of the two saints.

“When a group of people emigrate, they also bring their culture and in doing so, they enrich the community because of the diversity they bring,” said Iric Arribas, General Council of the Philippine Embassy in Washington, DC

Marison Mendoza, from Cavite, Philippines, was happy to attend the celebration with her family. Her daughter, Daphne, attends Filipino classes where she learns the culture and language.

“Our family is bilingual and we pray daily,” she said. Mendoza hopes her daughter will learn about her heritage and her faith by attending such events.

In his homily, the Archbishop encouraged members of the congregation to become disciples like Saints Lorenzo Ruiz and Pedro Calungsod, two martyrs of the faith.

“The Filipino saints are gems,” he said. “They left everything behind for Christ’s sake.”

The Archbishop challenged the congregation to think about what might be loved more than Jesus today.

Smith joined with many others in giving thanks for five centuries of Christianity in the Philippines.

“We are ‘good at giving,’ he said. “In other words, helping our fellow human beings to go to Heaven.”

Visit http://www.philipino-council-aob.org/latest/ to learn more about the Filipino community in the Archdiocese of Baltimore.