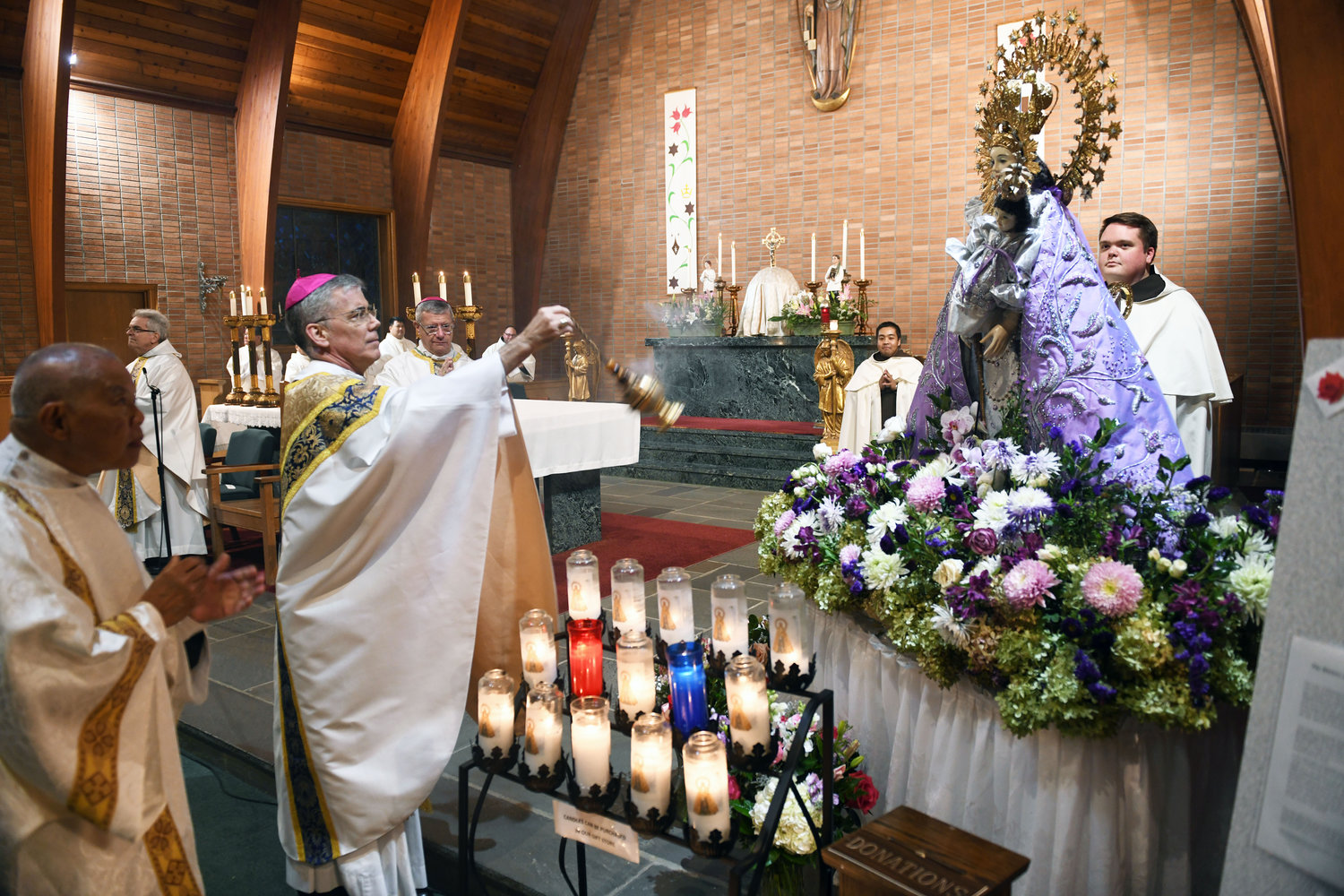 Marcelo Adiong said he felt at home in the Philippines listening to Archbishop Charles Brown celebrate a thanksgiving mass at the National Shrine of Our Lady of Mount Carmel in Middletown.

Mass on October 23 was part of a celebration organized by the Fil-Am Catholic community of the Hudson Valley to mark the 500th anniversary of Christianity in the Philippines. Pope Francis celebrated Mass earlier this year to mark the celebration of a year marked by Filipino Catholics around the world.

Archbishop Brown, a New Yorker who was ordained for the Archdiocese by Cardinal John O’Connor in 1989, is the Apostolic Nuncio of the Philippines. During Mass, he shared stories from his time seeing vibrant Filipinos celebrating their Catholic faith.

He was joined on the altar by Auxiliary Bishop Gerardo Colacicco and Father Mario Esposito, O. Carm., Provincial Prior of the Carmelite Brothers.

“Her experience in the Philippines brought me home,” Adiong, a 45-year-old parishioner of Our Lady of Mount Carmel in Middletown, told CNY.

Christianity was introduced to the Philippines by European settlers in the 16th century. In 2019, the Philippines had the third largest Catholic population in the world behind Brazil and Mexico, and the number of baptisms in the Philippines was essentially the same as all European countries combined.

“The Philippines is now a power of faith. You have been good at giving, ”Archbishop Brown said in his homily.

“We are able to see spiritually where to go, where to live, how to treat others. It is the essence, the foundation of our Catholic faith.

Archbishop Brown has witnessed vibrant Filipino Catholics during his tenure as Apostolic Nuncio in Ireland and Albania, and now during his 11 months in the Philippines. He added that his sister lives in Turkey and that half of the congregation at mass in Ankara is Filipino.

“So the first thing you want to celebrate now is the richness of Filipino Catholicism, but as I say in the Philippines when I preach on the 500th anniversary of the arrival of the Catholic faith in the Philippines, we cannot rest. on our laurels because we say how wonderful it is that faith has come, ”he said.

“We have been good but we have to give. We have to evangelize in our own way by our way of living, by the way we treat others. By the fact that we go to mass on Sunday people see it. Our way of life has an influence, has an influence that converts people.

Mass was part of the Filipino celebration at the Middletown Shrine. A week earlier arrived the pilgrim statue of Our Lady of the Rosary of Manaoag, patron saint of the sick, the destitute and the needy. The statue remained at the shrine throughout the weekend celebration.

Before Mass, an open-air procession with an image of Our Lady of Antipolo, Our Lady of Peace and Bon Voyage was postponed due to the weather, and an indoor coronation and rosary were held. After mass there was an official Filipino dinner and a cultural evening.

Rolly and Sharon Mangonon, both 51, are parishioners of the Sacred Heart of Monroe who have been married for 25 years. They arrived in the United States from the Philippines in 2001. They attended the celebration with their daughters Brianna and Bianca, who read the second reading.

“It was a beautiful celebration,” said Sharon. “Wherever we are in the world, we bring our devotion and our faith. Our faith has helped us live in a new country knowing that the Lord has given us this opportunity to improve our lives. In doing so, we look to him for help in our struggles and challenges to live our life in a new country. “

Rolly added, “It is right to celebrate and be grateful for the many blessings in our life. We look forward to the next 500 years. This is big business, the culmination of our faith and the many blessings we have had as a family, country and community.

Adiong said the Catholic faith is an important part of Filipino life.

“We rely on our faith,” he said. “We have become resilient because of our faith. We know God is there and this is very important.

Speaking of the 500th anniversary celebration, Brother Von Erick M. Sandoval, O. Carm., Coordinator of the Fil-Am Catholic Community of the Hudson Valley, said, “There was a very good turnout, very well coordinated. The Spirit was alive. God was certainly with us.

Message from the Vatican to Diwali: Christianity and Hinduism “can bring the light of hope into the lives of people”.