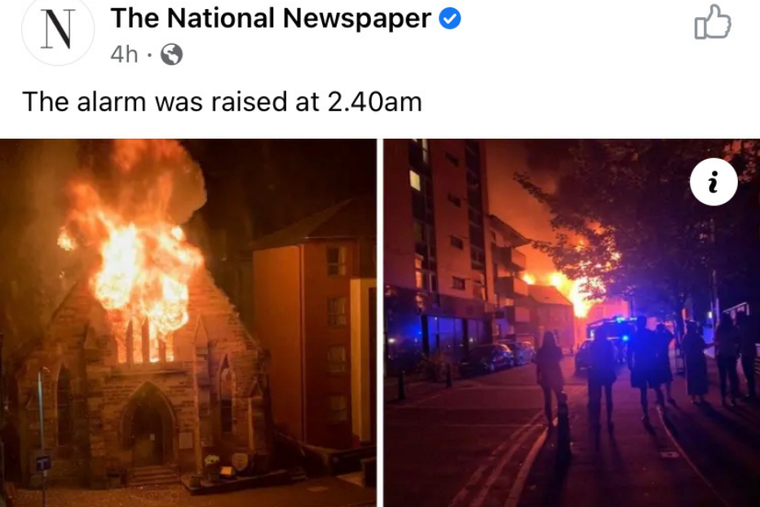 The incident occurred two days after a Catholic priest was attacked by a man brandishing a glass bottle while praying in a cathedral in Edinburgh, the capital of Scotland.

GLASGOW, Scotland – More than 30 firefighters battled a devastating blaze at a Catholic church in Glasgow, Scotland in the early hours of Wednesday.

One person was rescued after firefighters were called in following a fire in St. Simon’s, Partick on July 28.

Gruesome footage of St Simon’s Partick, destroyed by fire overnight. Thank goodness no casualties, but a sad end to a much loved parish church and spiritual home for the Polish community in Glasgow. pic.twitter.com/Jn2Ra6qEYx

Photos shared on social media showed flames bursting from a church window and onto the street.

The incident occurred two days after a Catholic priest was attacked by a man brandishing a glass bottle while praying in a cathedral in Edinburgh, the capital of Scotland.

Scottish Health Minister Humza Yousaf spoke of the assault as he expressed sympathy for the Catholic community in the aftermath of the fire.

“What devastating days for Catholics in Scotland,” he said wrote on his Twitter account. “First a cowardly attack on a priest in his place of worship, followed by this one. I know that Saint-Simon had a special place in the heart of the Polish community.

“Solidarity with our Catholic community in Scotland. “

Pope Francis is expected to visit Scotland “for a very short period” in November, a spokesperson for the country’s bishops’ conference said earlier this month.

The Pope is likely to attend the 2021 United Nations Climate Change Conference (COP26) to be held in Glasgow, Scotland’s largest city, from November 1-12.

According to the parish’s website, St. Simon’s is the third oldest Catholic church in Glasgow after St. Andrew’s and St. Mary’s Cathedral in the city’s East End.

It was opened in 1858 by Fr. Daniel Gallagher, an Irish priest who taught Latin to explorer David Livingstone, allowing him to enter medical school.

The church, originally called St. Peter’s, was used by Polish soldiers during WWII and became known as the Polish Church. Masses in Polish continue to be celebrated in the church.

The church was completely restored between 2005 and 2008 for its 150th anniversary.

A spokesperson for the Scottish Fire and Rescue Service said: “We were alerted at 2:40 am on Wednesday 28 July of reports of a fire at a church in Partick Bridge Street, Partick, Glasgow.”

“The operations control mobilized six fire apparatuses, of which two apparatuses at height and more than 30 firefighters are present and working to extinguish the fire. “

“One person was helped from the property and received precautionary treatment at the scene. Adjacent properties have been evacuated as a precaution and nearby residents are advised to keep windows and doors closed due to the smoke.

“Road users should avoid the area to allow access for emergency service vehicles and due to road closures.”

“The crews should stay there for a while. “

The cause of the fire is being investigated.