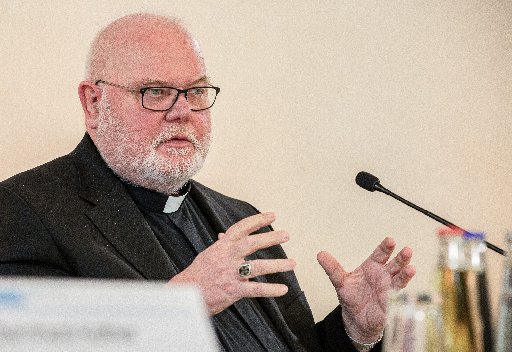 BERLIN — No other German bishop has so dominated Catholic life in Germany in recent years as Cardinal Reinhard Marx, who announced he would remain archbishop of Munich and Freising despite a report questioning his leadership in dealing with cases of abuse in the archdiocese.

The 68-year-old former president of the German bishops’ conference has been the face of Catholicism in Germany, an outspoken presence on sociopolitical issues, for two decades. But in recent years he has been dogged by rumors of his role in covering up or failing to act quickly enough in alleged cases of sexual abuse in the dioceses he led.

When he was appointed Bishop of Trier in 2002, parishioners saw him as young and open-minded, easily approachable. His sermons in the city’s 4th-century cathedral drew large crowds.

He was an outspoken critic of the culture of greed in modern capitalism and repeatedly pleaded with leaders to embrace the social components of a social market economy. In 2006, he criticized the “bold” salary increases of top managers.

“We are moving further and further away from a social market economy towards capitalism, where performance is the only thing that matters,” he said at the time. “Other business objectives, such as job creation, are no longer taken into account. It’s a mistake,” he told a local newspaper at the time.

“It’s pure capitalism without social responsibility. The other Marx of Trier could still be right. And that, I would find that awful,” the bishop said, ironically referring to the philosopher and economist Karl Marx, born in Trier in 1818, and whose ideas sparked the rise of communism in the 20th century.

After the Cardinal was promoted to the Archdiocese of Munich and Freising in 2008, he continued to be a staunch supporter of the Catholic social ethic, which he saw as critical of both communism and massively devoted capitalism. profit margins. In 2020, he echoed Pope Francis’ call for a universal basic wage as part of recovery plans after the coronavirus pandemic.

As president of the German bishops’ conference from 2014 to 2020, he helped put the German church on the process known as the synodal path, saying the clerical sex abuse scandal and demands for reform had changed the German church.

“The church in Germany is going through a break. Faith can only grow and deepen if we are freed from stuck thinking, to pursue free and open debates and the ability to take new positions and tread new paths,” he said. at the end of the plenary assembly of bishops in March. 2019.

“The Church needs synodal advancement. Pope Francis encourages this,” Marx said. “We will create formats for open debates and link to procedures that facilitate responsible participation of women and men in our dioceses.”

The cardinal has commissioned a law firm to conduct an investigation into sexual abuse in the Archdiocese of Munich and Freising. The lawyers’ 1,900-page report, which spanned decades, implicated him for abuse mishandling in two cases. When presenting the report on January 20, lawyers said it appeared the cardinal learned after 2018-19, when a church-commissioned report detailed thousands of cases of sexual abuse by Catholic clergy. over six decades.

When Pope Francis called the presidents of the world’s episcopal conferences to the Vatican for a summit on the abuse crisis in February 2019, Marx argued for the lifting of papal secrecy, in which those who have been abused by clergy are sworn to keep the secret. The cardinal said at the summit that removing pontifical secrecy – something Pope Francis did later that year – would promote transparency in situations where the lack of transparency means “the rights of victims have been effectively trampled and left to the whims of individuals.

In 2020, when Marx announced that he would not run again for the presidency of the German bishops’ conference, Thomas Sternberg, then chairman of the Central Committee of German Catholics, said that the cardinal embodied “the hope for a new image of the Church in Germany”. .”

“Cardinal Marx has achieved the greatest achievement in regaining the trust and credibility of the Catholic Church,” he said.

In December 2020, Marx founded the foundation “Spes et Salus” (Hope and Healing) for victims of sexual abuse in the area of ​​the Church. He has donated half a million euros of his own private fortune to the foundation and said the non-profit foundation is meant to facilitate healing and reconciliation.

He explained that “sexual abuse in the area of ​​responsibility of the church is a crime. It destroys the lives of many people and places a heavy burden on those directly affected, but also on their families and friends. The whole church system is guilty here. Abuse has systemic causes and consequences.

The foundation is administered under the aegis of the St. Korbinian Foundation of the Archdiocese. A member of the advisory council is also a victim of sexual abuse at the church. The foundation cooperates with the Institute of Anthropology: Interdisciplinary Studies in Human Dignity and Care of the Pontifical Gregorian University in Rome.

In 2020, Marx said: “It is all the more important for me, both in the office of the Archbishop of Munich and Freising and as a private person, to do everything I can to fight and accept abuse.

He said that meetings and conversations with those affected by the abuse, reports and inquiries into their lives and fates, “showed me clearly how much strength must be expended and how much effort is needed to confront and resolutely address the causes and consequences of abuse.” He added that “money cannot heal wounds, but it can help create conditions that enable healing and transformative processes.

In 2021, after protests from survivors of sexual abuse at the hands of Catholic clergy, he declined Germany’s highest honour, the Order of Merit with a Star.

“I take very seriously the criticisms that are now being voiced by people who have been affected by sexual abuse in the Church realm, regardless of the accuracy of individual statements made in open letters and in media publicity. “, wrote Cardinal Marx. to German President Frank-Walter Steinmeier.