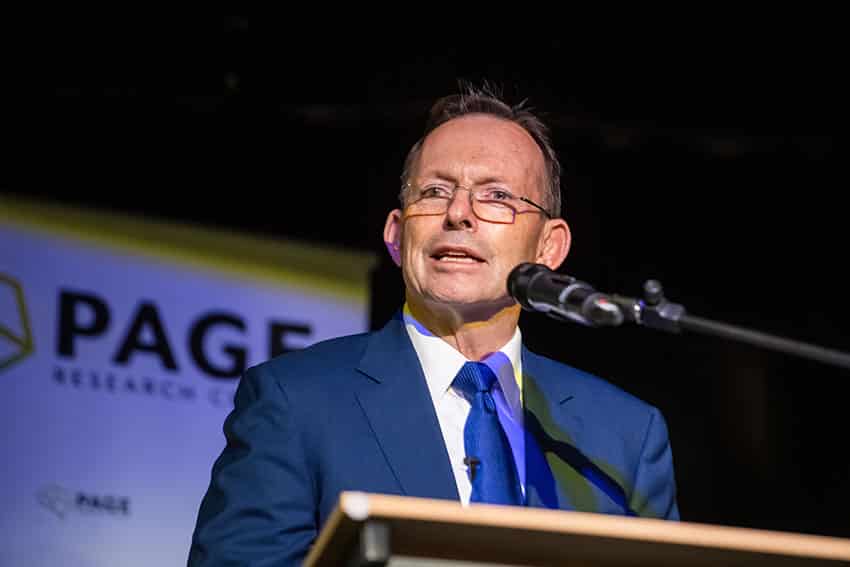 Mr Abbott was speaking at the launch of a new anthology by the academic and Catholic weekly contributor, Dr. Kevin Donnelly, titled Christianity Matters in Troubled Times; the book features chapters from prominent Australians, including Cardinal George Pell and Australian charity director and Baptist minister, the Reverend Tim Costello.

Mr Abbott said the passing of voluntary assisted death laws by all Australian state parliaments was an unprecedented setback for believers.

“As Christians, we understand that death is a transition rather than an extinction and that suffering is almost an inevitable part of life. Yet our parliaments have sadly succumbed to the culture of death. These laws are not intended not to allow people to die in peace, but to enlist doctors to hasten people’s deaths,” the former prime minister said during an audience at the Page Research Center that hosted the May 19 book launch.

“The law of the land must be clear: life is sacred and Christianity conveys this with an eternal message that Christ sent his only begotten son to sacrifice himself in atonement for our sins. Like Saint Paul, we must fight the good fight, keep the faith and do our best to stay the course, remembering the words of Jesus: “I am always with you, even until the end of time”, has added Mr. Abbott.

The book’s editor, Kevin Donnelly, said there is growing evidence that governments are increasingly attacking Christian values, particularly when it comes to basic parental rights.

“We now have legislation in Victoria preventing parents, counselors and priests from advising young people not to gender transition, which highlights the fundamental problem that socialism has increasingly become the religion aimed at killing Christianity,” he said.

In her chapter of the book, “Christianity Under Attack,” psychologist Wanda Skowronska shares some valuable insights into the persecution of Christians in recent decades, especially in parts of the Middle East.

The editor of The Catholic weeklyPeter Rosengren, wrote a chapter of the book entitled “The Sins of Christianity”.

He said at the book launch that despite the undoubted failures of the past, believers have good reason to remain hopeful in the future.

“I see signs of new life and new forms of Christian existence that give me great hope and optimism for the future. The Church will come through every crisis, as it has done before. It is therefore good to reflect on the words of Christ himself: “The fields are white for the harvest”.