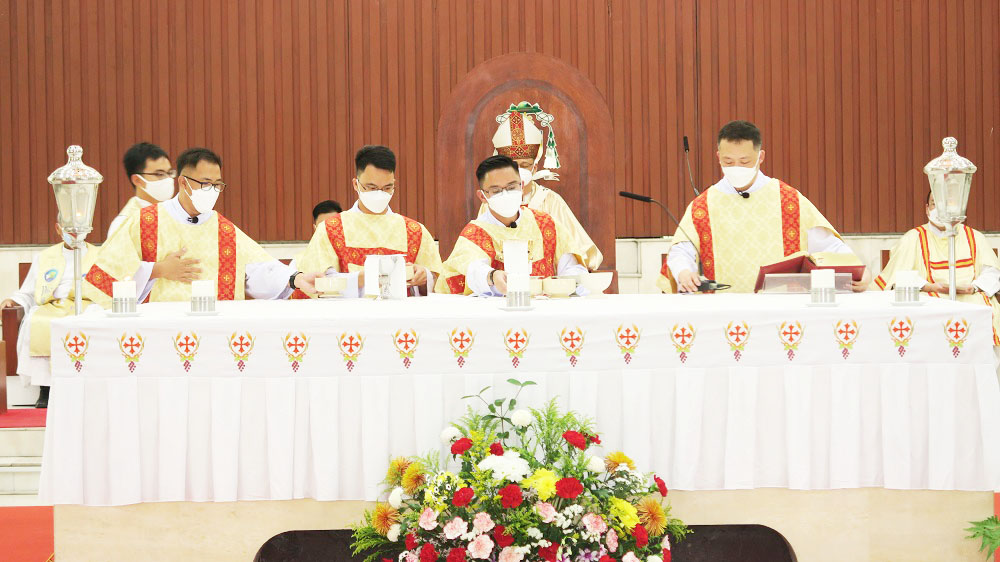 One geologist, the other engineer, the other road works supervisor and the fourth supermarket supervisor – these four people from different backgrounds are now deacons in the Catholic Church.

Newly ordained deacons (left to right) Peter, Lasius, Terans and Sylvester attending the Eucharistic celebration during their diaconal ordination on December 4 at the Cathedral of the Sacred Heart

Lasius Gantis, 30, from Inobong parish, Peter Chung Pit Soon, 43, from Tuaran parish, Terans Thadeus, 33, from Limbahau parish and Sylvester Wong Vun Cheong, 42, from the cathedral of the Sacred Heart, stood before Archbishop John Wong of Kota Kinabalu, who ordained them deacons of the Church, on December 4, during the 10:00 am ordination mass at the Cathedral of the Sacred Heart.

Deacons will assist the Archbishop and priests, among other tasks, by providing spiritual guidance to the community, visiting the sick and the elderly, attending weddings, baptisms, distributing Holy Communion and presiding over services. funeral.

Deacon Terans spoke on behalf of the four newly ordained to be ordained to the order of deacons in times of pandemic: “Being a deacon is a new beginning for us. The real service of our calling has just begun.

“The pandemic world has indeed brought uncertainties in our lives and perhaps despair to some of us.

“May today’s ordination give us a glimmer of hope that God will never leave us because God is love.

“If not for God’s sake, the Archdiocese of Kota Kinabalu would not have four new deacons today,” said the newly ordained.

Archbishop John Wong also expressed the same feeling that God is the one who blesses the Church through this ordination.

“I thank God for his continued love and care for our local Church. He never fails to bless us with young people who are ready to devote their lives to being his instruments of love and service ”, declared the prelate.

It is fortunate that there are now four additional ministers of the Word and the Sacraments to meet the needs of the people of the Archdiocese.

He congratulated and welcomed the new four: “I would like to congratulate the four for their availability to serve as deacons, for their courage and their generosity to come forward.

“I invite you to join with the rest of our priests in responding to the growing pastoral needs of our local Church,” said the Archbishop.

A joyous celebration like this would normally bring worshipers together by the thousands, if not hundreds, but by now the Church is already accustomed to the new standard of healthcare standard operating procedures that limit travel and drastically reduce numbers. of people in any one event.

The people present at the ordination mass were the families of the four new presidents of the parish pastoral councils of the parishes concerned, the nuns and the other guests. Nonetheless, many attended Mass virtually via the Cathedral’s Youtube channel.

The Archbishop recognized the faith, support and encouragement of the family members who initiated the diaconal ordination of their sons. He reassured them that God’s blessings are not limited only to newly ordained, but also to their entire families.

Deacon Terans entered the seminary as an aspirant in the formation house of the Archdiocese of Kota Kinabalu in 2010, continued to the Year of Initiation (IY) in 2011, to the Year of Philosophy in 2012-2013 and the theological year in 2014-2015. In 2016 he took leave in 2016 and worked at Gammerlite Sdn Bhd for three years until 2018. Then he returned to seminary and continued his theological year in 2019 until May 2021.

Meanwhile, Deacon Lasius entered the Archdiocesan formation house as an aspirant in 2013. Then, in 2014, he joined Deacons Sylvester and Peter during the Initiation Year (IY) and subsequent years. .

Deacons graduated from St Peter’s College Seminary in Kuching at the beginning of May this year and began their pastoral attachment in parishes at the end of May.

As deacons, they will remain where they were assigned for their pastoral work; Deacon Peter will continue to serve in Labuan Parish, Deacon Lasius in Kiulu Parish, Deacon Sylvester in Inanam Parish and Deacon Terans in Tuaran Parish.–CS

Archbishop Tutu had close ties to the Catholic Church

Byrnes: Inclusiveness is key for the Catholic Church | News

The surprising link between a neighborhood in Raleigh and the Catholic Church ::…