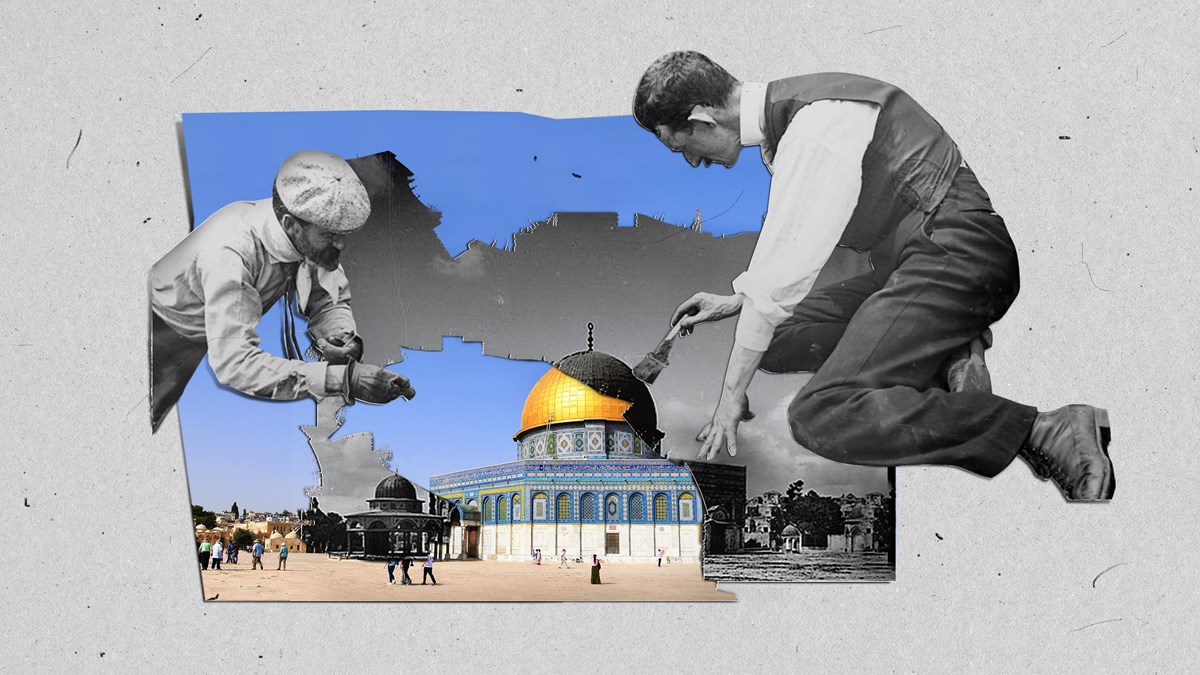 Modern Israeli leaders are unequivocal about the importance of Jerusalem to the State of Israel.

“It has been proven beyond doubt that Jerusalem is the main artery of our national consciousness,” former Israeli Prime Minister Benjamin Netanyahu said in 2017. “The root of Zionism is in Zion.

This was not always the case. In the early years of the Zionist movement, the Jewish Diaspora envisioned recreating a homeland in many places, from the United States to Uganda. Palestine was on the list, but many Zionists, who tended to be secular, saw Jerusalem as a backward and superstitious place, the exact opposite of the forward-thinking socialist nation they envisioned.

The story of how that changed begins, oddly enough, with a 19th-century Connecticut Congregational minister named Edward Robinson.

When Robinson visited Germany in the 1830s, he was shocked by the discipline of biblical criticism then flourishing in Protestant universities. Instead of treating Scripture as divine revelation, German scholars subjected the Bible to the same textual criticism as other ancient documents.

Robinson was deeply concerned that these scholars were questioning what he cherished as the revealed truth of Scripture. He feared that the theological disease would spread from Germany to liberal-minded Harvard University and from there infect American Christians.

To combat this trend, Robinson came up with the innovative idea of ​​proving the truthfulness of places, names, and events described in the scriptures. He would use the tools of science to oppose what he saw as a grave threat to the Christian faith. Thus, in 1838, he arrived in Jerusalem armed with a compass, a measuring tape, a telescope and the Good Book as a guide.

“From my earliest childhood I had read and studied the localities of this sacred place; now I saw them with my own eyes,” he later wrote. “And they all felt familiar to me, like it was the fulfillment of an old dream.”

His specific objective was to put his finger on what he called “the indisputable vestiges of Jewish antiquity”. He hoped to see evidence of Solomon’s reign. Or at least Herod the Great. This was no easy task, given the Roman destruction of Jerusalem in AD 70 and the following centuries of warfare, regime change and religious upheaval.

He was disappointed with what he found – or rather, he didn’t.

“The glory of Jerusalem is indeed gone,” he wrote. Long under the rule of the Ottoman Turks, it was then a small town crowded with shrines of three religions.

Undeterred, he scoured the city and surrounding countryside for names of buildings, wells, and villages that betrayed an echo of the nomenclature used in the Bible. He wanted to map the Holy Land, locate the sites of Scripture in contemporary geography.

On his return to New York in 1841, Robinson and his collaborator Eli Smith published a book with the sonorous title of Biblical Research in Palestine, Mount Sinai and Arabia Petraea. He made their case for the geographic accuracy of the Bible.

The volume may not have been an obvious bestseller, but it was picked up on both sides of the Atlantic. For some, it wasn’t just interesting; it was divinely inspired.

“They obeyed an impulse from above,” wrote a British critic. “Jehovah wanted them to be witnesses of his truth.”

Whether or not their journey was guided by God, this new marriage of science and religion has proven irresistible to millions of Christian believers. It also put Jerusalem back on the physical map for Westerners at a time when steamships and trains made it more accessible. Robinson and Smith had laid the foundations for “an entirely new scholarly, religious, and political enterprise in the Holy Land,” notes historian Neil Asher Silberman.

It was a business that would reshape the Middle East.

One of those inspired by Robinson was a Disciples of Christ missionary from Virginia named James Turner Barclay. After settling in Jerusalem in 1851, he heard “wonderful stories of its subterranean passages, galleries and halls”. An Ottoman official assured Barclay that beneath the city lay “the magnificent subterranean remains of the magnificent palaces of King David, Solomon and various other monarchs of old”.

Barclay did not find many Jews interested in converting to Christianity, so he spent his time surreptitiously exploring various caves and wrote a popular book about his adventures.

A dozen years later, in 1863, the Ottoman Sultan of Istanbul issued the first permit to dig in Jerusalem. It went to a French senator named Louis Félicien de Saulcy.

A devout Catholic and confidant of French Emperor Napoleon III, de Saulcy soon discovered an ancient sarcophagus in the Tombs of the Kings, the city’s largest funerary complex, located just north of the walled old town. Despite the complaints of the Jews of Jerusalem, who accuse him of having robbed the tombs of their ancestors, the Frenchman declares to have discovered the bones of a former queen of Judea. He had them sent to the Louvre. His claim was later proven to be false, but the display of the world’s first alleged biblical artifact caused a stir with the public.

Not to be outdone by their French Catholic rivals, British Protestants quickly organized the Palestine Exploration Fund to bring biblical remains back to the British Museum. Their star explorer was an Anglican military officer named Charles Warren, who was also a dedicated Freemason fascinated by Solomon’s Temple.

Scholars have speculated that this temple, believed to have been destroyed by the Babylonians in 586 BCE, once stood on the city’s acropolis. Muslims call this vast rectangle backed by massive stone walls the Noble Sanctuary, while Jews know it as the Temple Mount. Digging in what has long been Islam’s third-holiest site was strictly prohibited, so Warren worked his way around the massive walled compound, occasionally using dynamite to remove obstacles underground.

This did little to endear him to Arab Muslims, who quite plausibly suspected the Englishman of attempting to undermine their holy place.

Soon, the people of Jerusalem saw an unexpected side effect of all these excavations: tourists. Crowds of visitors – mostly American Protestants – began to stream into the city.

Like Robinson, early Western visitors often found themselves disappointed by the holy city. Most Jews spoke Arabic, and Muslim imams jostled for Christian priests in the narrow alleys. The place seemed at odds with the Jerusalem they had learned in Sunday school. A contemporary guidebook warned that not much was left of the “famous capital of the Jewish Empire”.

Westerners were happier underground. The Warren Tunnels, exposing passageways and halls dating back to the time of Herod the Great, have become major attractions, satisfying tourists’ appetites for what Jerusalem was “meant” to look like.

Soon, German and Russian archaeologists joined the British and French in searching for evidence of the ancient Judean past. These explorers were looking for more than proof of the biblical role of Jerusalem. They also wanted to unearth precious remains both materially and spiritually. In 1909, a British aristocrat named Montagu Brownlow Parker even assembled a team of European psychics, codebreakers and engineers to search for the temple’s treasures, including the Ark of the Covenant, believed to lie beneath the city.

Parker estimated the artifacts to be worth $5.7 billion in today’s currency. He and his special excavation team dug a tunnel for two years but found nothing beyond a few potsherds. Desperate to pay the investors, he used bribes to gain access to the Dome of the Rock on the Noble Sanctuary. Discovered carving the sacred stone under the dome, the team fled for his life. It was said – wrongly – that they fled with the riches of Solomon. The incident embittered Arab Muslims on both Western explorers and the city’s Ottoman rulers. The ensuing scandal nearly brought down the Ottoman government in Istanbul.

European Jews were no more pleased with the ongoing excavation efforts than local Muslims. From their point of view, the Christians were trying to flee with important vestiges of their heritage.

“We, who should be the party most interested in these archaeological excavations, do almost nothing in this field and leave it to whoever wants to: Germans, Americans, British,” one writer complained in a 1912 Russian Jewish newspaper article.

Edmond de Rothschild, a French Jewish banker, launched his own expedition to find the Ark of the Covenant in 1913. It was the first Jewish-led effort in the Holy Land. Rothschild, who was also working to settle displaced European Jews in Palestine, was eager to beat the Christians in the hunt for ancient Jewish treasures.

This excavation ended unsuccessfully when World War I broke out the following year. Yet the attention paid to subterranean Jerusalem by early Western explorers – and the enormous media coverage accompanying each discovery – fueled a growing interest in the city among Jews seeking an independent homeland for their people.

By the time the British conquered the city in 1917 from the Ottomans, Western Jews saw Jerusalem’s ancient sites as more than just places of prayer. They have become symbols of a Jewish nation. And what began as a Christian effort to prove the truth of biblical history led to the beginnings of the State of Israel.

In the aftermath of World War II, the British ceded the territory to the United Nations and the nation of Israel was born. At that time, in the aftermath of the Holocaust, many Jews felt a deep desire to make Jerusalem their capital.

After 1967, when Israel captured the old city from Arab forces, excavations continued but under the auspices of the Israeli government. These have focused on the Judean past, and Israeli politicians have often cited archeology to claim all of Jerusalem as Israeli territory. It has sparked complaints, sparked protests and sparked riots among Palestinians who consider the holy city their own.

The search for biblical Jerusalem begun by Robinson continues to generate political and religious controversy. In fact, it was this very search that made Jerusalem the contested city it is today.

Andrew Lawler is the author of Beneath Jerusalem: The Buried History of the World’s Most Contested City.