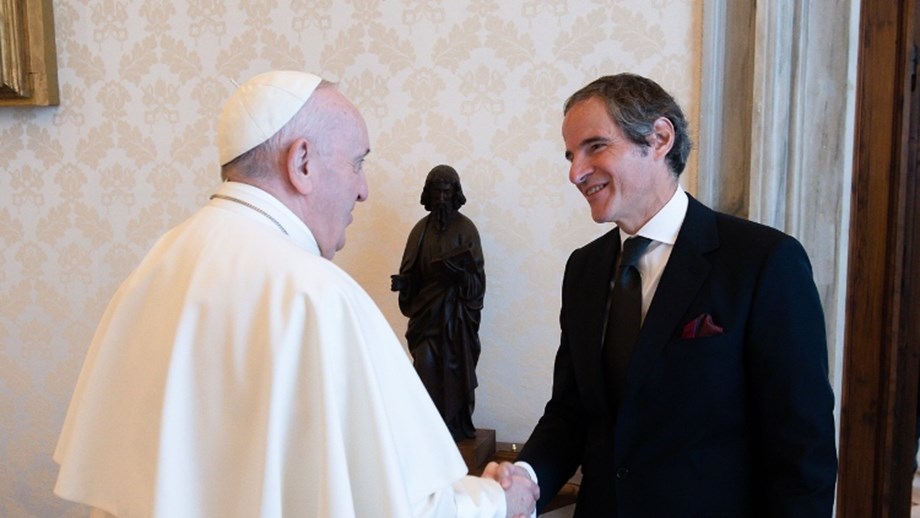 An instrument of peace, an accelerator of human health and development, a force for integral ecology and a voice of harmony in troubled times. These are the words Director General Rafael Mariano Grossi used to describe the IAEA in a private audience with Pope Francis in Rome this morning. Meeting with the Pope, who is the Head of State of the Holy See, an IAEA Member State, Mr. Grossi highlighted the peaceful uses of nuclear technology and the benefits they bring, and the two discussed the role of nuclear non-proliferation in creating a safer and more peaceful world.

â€œThe IAEA, through its own mission and work, shares with the Roman Catholic Church a concern and commitment for the well-being and improvement of our global society,â€ Mr. Grossi said in what he described it as a deeply moving and unforgettable exchange with the Pope.

The meeting took place on the first day of his two-day trip to Rome, where he meets with both Vatican officials and Italian officials.

The Roman Catholic Church, led by Pope Francis, has over 1.3 billion members worldwide – the largest denomination in Christianity.

In the past, Pope Francis has expressed in a number of messages and documents the Church’s position for a world without nuclear weapons. He called for the full implementation of the Nuclear Non-Proliferation Treaty (NPT) and recognized that nuclear energy gives humanity enormous power and possibilities.

During his meeting with Vatican Secretary of State Cardinal Pietro Parolin, Mr. Grossi discussed non-proliferation and the importance of nuclear security for world peace. Pope Francis has been a frank voice on climate change and environmental issues, and the Cardinal and Mr. Grossi spoke about the role of the IAEA in addressing these challenges. Mr. Grossi underlined the role of nuclear energy in the mitigation of greenhouse gas emissions and the decarbonization of economies.

Italy, a close partner of the IAEA In the afternoon, Mr. Grossi met the Italian Minister of Foreign Affairs and International Cooperation, Luigi Di Maio. Mr Grossi thanked the Italian government for the support it has given to the IAEA in recent years, including hosting training courses, contributing financially to the Marie Sklodowska-Curie fellowship program, participating in activities related to small modular reactors (SMRs) and fast neutron reactors, decommissioning of nuclear facilities, radioactive waste management, nuclear safety education and contributions to IAEA publications.

â€œItaly is a close partner of the IAEA whose invaluable support and collaboration help the Agency fulfill its mandate. We hope to continue our relationship and expand it into new areas, such as stopping the emergence of future pandemics, â€Grossi said. Last month, Mr Grossi met with Italian Parliament Speaker Roberto Fico and discussed the IAEA’s work on nuclear verification and monitoring as well as ZODIAC – an IAEA initiative to help countries prevent pandemics caused by bacteria, parasites, fungi or viruses of animal origin. and can be transmitted to humans.

This year, Italy will host the G20 summit in October, which will focus on public health, people, planet and prosperity, and will co-host with the United Kingdom the United Nations conference on climate change, the COP26. As part of COP26, the pre-COP summit and the Youth4Climate event will be held in Milan. Mr. Grossi and Mr. Di Maio discussed how the IAEA could be more involved in these activities and support global efforts towards a sustainable and low carbon future. They also discussed the progress of the dismantling of nuclear sites in Italy.

Today, up to 8% of Italy’s energy consumption is covered by imported nuclear power, but until 1990 the country operated four nuclear reactors. Mr Grossi met with Emanuele Fontani, Chairman and CEO of Sogin, the Italian state-owned company responsible for dismantling Italian nuclear power plants and managing radioactive waste, which was the main topic of their discussions.

Tomorrow, further strengthening the IAEA’s relationship with the Italian Nuclear Safety and Radiation Protection Authority (ISIN), Mr. Grossi will meet with the director of that authority, Maurizio Pernice, to discuss in more detail the close support of the IAEA. at ISIN in the dismantling of old Italian power plants. .

Also on June 15, Mr. Grossi will give a virtual lecture at the Accademia Nazionale dei Lincei. Entitled Atoms for Peace and Development: Science and Technology for a Better and Safer World, you can watch the conference live at 4:00 p.m. Rome time.