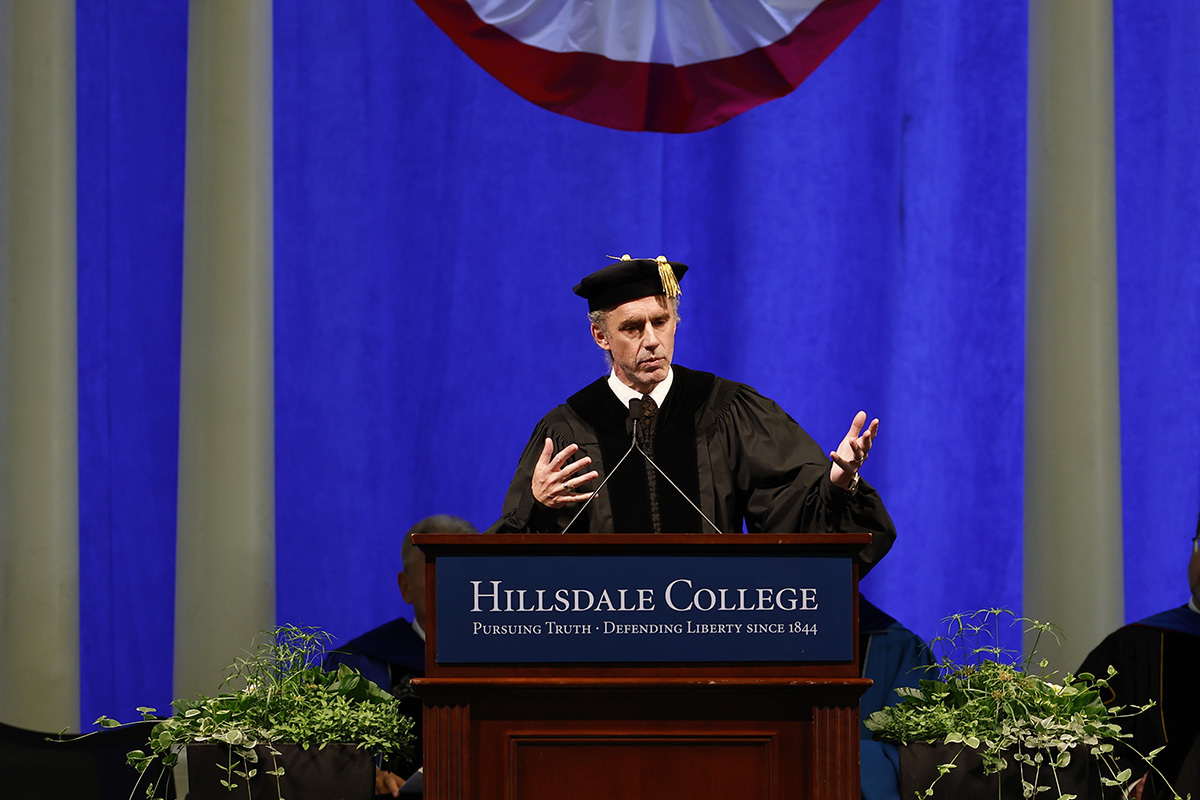 World-renowned clinical psychologist Jordan Peterson cited biblical stories and spiritual metaphors in his commencement address to graduates of Hillsdale College in Michigan, encouraging students to keep faith as they encounter temptation during this critical period of their life.

In the May 7 speech, the Canadian author and professor warned students that they are at a “crossroads” in life, where people encounter the devil and must “examine” their conscience. He noted that the students are no longer the people they were four years ago, and now have “the opportunity to be the next iteration of [themselves] that [they] may be.”

“And then you might ask, well, why do you meet the devil at the crossroads?” he said.

“And the answer is, more fundamentally, because when you come to a point in your life where you have to make a choice…as the choices now before you are important, you aim up or down, and there is always an agent of temptation at every choice point urging you to aim down,” the psychologist continued.

Peterson referenced the biblical story of Cain and Abel as an example of the “spirit of temptation”, illustrating how God punished Cain for making “inappropriate sacrifices” that were not “in the service of the greater good”. . Instead, his choices were “misleading and arrogant at the same time”.

“Because when we make inappropriate sacrifices, we believe deep down inside that we’ve drawn one on God,” Peterson said. “And I suggest that’s a temptation you might want to avoid, that presumption.”

He pointed to the story of Genesis 6:9-9:17, where God flooded the Earth because mankind had gone astray, but He spared Noah and his family. A personal anecdote he compared to Noah’s story involved his daughter, who was “very, very sick” for a long time when she was young. And Peterson warned her not to use her illness as an excuse, even though she had every reason to be “bitter.”

“So it’s a temptation, isn’t it? It’s the temptation of some kind of unfaithful desperation, and you could say an existential angst that you allow to take hold of you,” he said.

“I would say when you’re at a crossroads and you’re told to despair, pick yourself up with courage and see if you can resist it,” Peterson continued. “It’s better for you, and it’s better for the people around you. So it’s a downpour, man.”

He also referenced the story of the Tower of Babel in Genesis 11:1-9, when Noah’s descendants attempted to build a structure tall enough to reach the heavens. Peterson called it a “Luciferian” story, as Lucifer is the symbol of “the proud intellect” that rose too high and fell after defying God.

“The celebration of your own intellect, the building of your own empire for your own narrow purposes…part of the reason why you shouldn’t do this, even though it’s tempting in some sense, especially if you have any the ability is because, do you want to rule Hell?”

The self-help author advised students to break down their lives into “practicalities”, ensuring they have things like a career, relationships and civic duties to help “develop an image” of themselves. The vision for themselves should allow them to assume that with the “proper sacrifices” they can have it all”[they] need and desire.”

“And so, by practicing any good in any rigorous sense and making the appropriate sacrifices in that direction, you simultaneously learn to approach the good which is the sum or essence of all these proximal goods”, Peterson said.

“I would say that the essential insistence of Christianity is that the good which unites all these goods is the same good which is reflected in the image of Christ, which is an image of acceptance of the suffering of life and the necessity to serve the little ones as the highest vocation.”

Peterson argued that the promises of Christianity are probably “truer than anything else”.

The Canadian psychologist has a large following online and is a sought-after speaker known for providing life advice – especially to troubled young men – and using biblical archetypes to explain complex truths about human nature.

Although Peterson was raised a Protestant, he doesn’t seem to consider himself a Christian yet. In a February 2018 podcast interview with Roman Catholic author Patrick Coffin, the thought leader said it would likely take “three more years” before he could say whether he believed in Christ’s resurrection.

During a podcast interview in March with Jonathan Pageau, editor of the Orthodox Arts Journal, Peterson choked up discussing Jesus, prompting fans to pray for his journey of faith. He admitted he still doesn’t know what to do with Christianity, saying “it’s too terrifying a reality to fully believe”.

In October, Peterson’s daughter, Mikhaila, revealed on her podcast that she came to believe in God after traveling to Austin, Texas to see if she wanted to move there. She admitted that she dwelled on four major issues at the time. When Mikhaila confided in a stranger in Texas, he told her to seek God and that he would “reveal himself”.

After spending the night praying, Mikhaila said all four issues were resolved the next day, which seemed like a strange coincidence. As the podcaster felt an unusual sense of “calm,” she wondered if the experience was just a fluke.

“It occurred to me that I think what it meant was just to do everything, don’t do this 75%. It’s been a crazy month. I’m fine. It’s just that I’m kinda shocked,” she added.