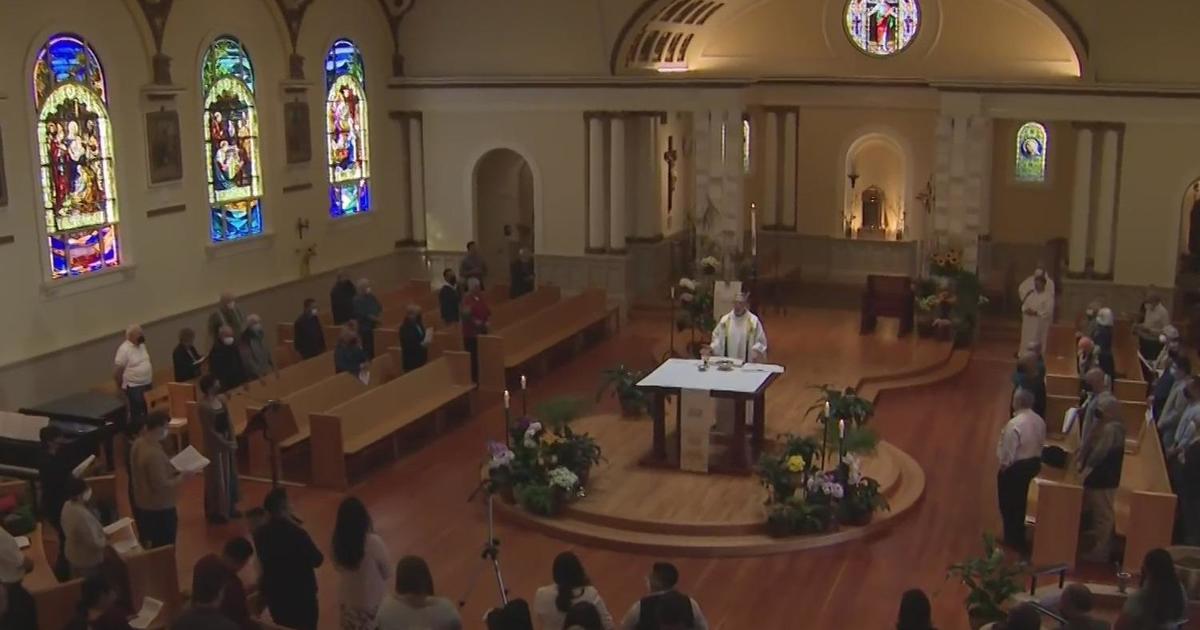 The decades-long fight for equal rights for the gay community included an unlikely transformation at a local Catholic church now thriving in San Francisco’s Castro district.

Members of the Church of the Most Holy Redeemer helped build and diversify the church it has become today. You don’t have to be a family member, best friend, or even a close friend to be invited to a meal at this warm and welcoming home.

Almost every night of the week for years, Jim Laufenberg and Mike Daly have been chopping, spicing and cooking. They invite neighborhood strangers to walk their dogs Fiona and Finn, fellow plane passengers and people from their church too.

“Sharing food is a great way to bring people to the table,” Daly said.

They feature countless photos and share heartfelt stories of guests from months or even years ago. Everywhere you look in their dining room you’ll see faces, young, old, gay and straight, including one of Mike’s favorite relics, the Virgin Mary.

Mike and Jim don’t preach or politicize over dinner. But they speak with passion of the day they met between the “prayers on the pews”

“I heard you were single. I looked up at Jesus and thought, ‘Where have you been all my life,'” Daly said.

Their faith is their foundation as a Catholic gay couple, even when their religion and homosexuality – in practice and theology – still don’t mix in many ways.

This tension between the Catholic Church and the LGBTQ community reached a boiling point in December 1989, when protesters from the AIDS Coalition to Unleash Power (ACT UP) stormed Saint Patrick’s Cathedral in New York to denounce the role of the church in stopping the use of condoms. distribution in schools and other policies.

“I would like to see the church open up more,” Laufenberg said.

Jim and Mike vividly remember the struggle for same-sex marriage. They tied the knot eight years ago, shortly after the US Supreme Court struck down California’s controversial Prop 8, which banned same-sex marriage in 2008.

But their hope to see the Catholic Church evolve even more continues today.

“It’s difficult [being gay and Catholic]especially when I go to other churches that don’t feel as welcoming,” Daly said.

“I would like to see Rome change some of its ideas by being less conservative in terms of diverse people receiving Communion, women as priests, having priests having a life partner, whether male or female . I don’t care,” Laufenberg said. .

Breaking with thousands of years of Catholic tradition can be a difficult, daunting and daring challenge. But that is exactly what happened at the Most Holy Redeemer almost 50 years ago.

“The elderly in this parish began an AIDS ministry and outreach to young men and it became an unlikely religious family of the gay and elderly community and became affectionately known as gays and gray,” said Matt Dorsey, a church member and overseer from San Francisco.

As the AIDS crisis deepened in the late 80s, this church played a vital role as a support center and opened a hospice just across the street that ended up serving so many patients.

“They came here in the 80s and 90s just to have someone hug them and pray for them,” Daly said.

A scroll inside the church lists hundreds of AIDS victims, as well as a fountain in the courtyard to commemorate those who lost their battles.

“There would be pages of young people in their 30s and 40s who were dying,” Daly said. “It was a very dark time.”

Daly worked as a nurse for more than 40 years and watched patients struggle – and die – at San Francisco General Hospital, many of whom were connected to his church. Her faith in a greater being gives her peace and new life, even in the shadow of death.

“It gave me the support I needed to help others,” Daly said.

It is this spirit of loving others who need it most that inspires and drives ordinary men like Daly and Laufenberg to become pillars of this Catholic community in the Castro, a community that has come to open its doors fully to LGBTQ community and anyone looking for hope and meaning. live.

“I know it’s perfectly normal,” Laufenberg said. “What God does is good. God made us who we are. We didn’t choose to be gay.”

“The slogan [is] “The inclusive love of God is proclaimed here. Leave no one behind. “, Dorsey said. “That was true even when it was really hard during the AIDS crisis, when the church wasn’t as welcoming as it should be for members of the LGBTQ community towards the people living with HIV and AIDS. . This church and this parish have shown the way.”

LGBTQ parishioners are still denied the rights of other Catholics. Same-sex couples cannot be married in church by a Catholic priest.

Jim and Mike were raised in Catholic traditions and say they believe in the church’s message of love, care and concern. Their hope is to see the younger generation of the church continue to carry the torch.

When Kenny Choi hopped in the backseat, he never thought he’d be introducing his rideshare driver to National Public Radio. The hour-long drive to the airport turned into a conversation about politics, the economic divide and the cultural differences between the East Coast and the West Coast.