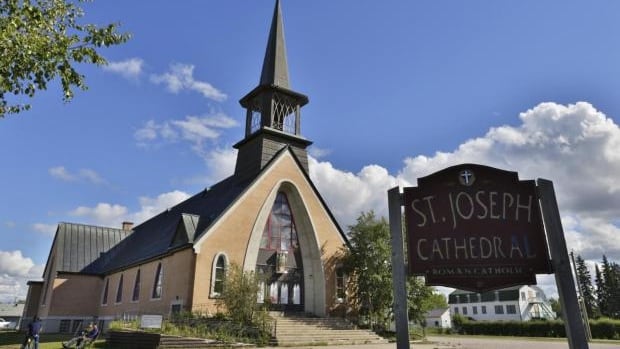 Memorials removed from the steps of a Catholic church in Fort Smith, Northwest Territories, were returned to their proper place by the local priest.

A photo posted to Facebook on Tuesday showed what Briann Debbie Gagnon said was a man throwing memorial items left on the steps of St. Joseph’s Cathedral in Fort Smith into a dumpster.

Gagnon said the items included a pair of boots she placed on the steps of the cathedral in memory of the approximately 215 children found buried on the grounds of a former boarding school in Kamloops, British Columbia. now deceased, was a residential school survivor.

“I really had no idea who this guy was or who he was representing,” Gagnon said.

Gagnon said the man told her to take the shoes off, but she refused.

“I’m here to honor the children of Kamloops,” she said, adding that it was after this the man put them in the dumpster in the church parking lot.

Putting shoes on the steps of churches is a show of solidarity that has been seen across the North — solidarity with those who have suffered, and continue to suffer, because of Canada’s residential school system. The Catholic Church, and others, played a central role in this system.

CBC News contacted the church and spoke to the Reverend Father Cornelius Ngurukwem and he said the items have since been put back on the steps of the church.

He says he has received many phone calls about the missing items and he does not know who moved them.

“I apologized on behalf of whoever deleted this because I never instructed anyone to delete anything,” he said.

With the help of Ramanda Sanderson, who climbed into the dumpster to remove items, and Cayleen Adam, the shoes and teddy bears were brought back up the church steps.

The church will have a memorial mass tonight and prayers for the bodies of children found in Kamloops. Ngurukwem says a larger gathering is planned for a later date when larger groups can gather.