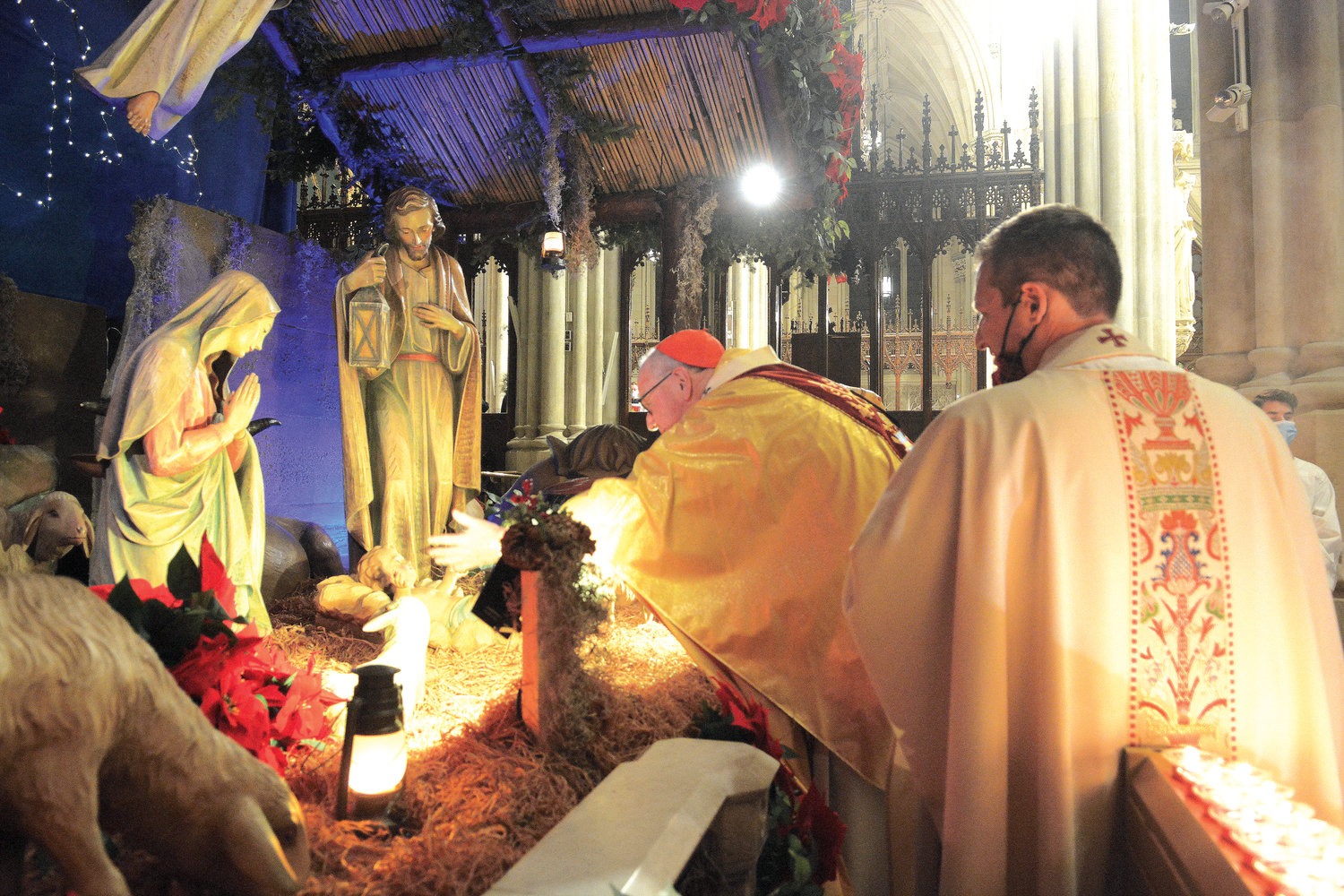 Bethlehem and the manger of the Child Jesus were the highlights of the homily delivered by Cardinal Dolan during the Christmas midnight mass he celebrated on December 25 at St. Patrick’s Cathedral.

â€œEach Mass is again a live nativity scene,â€ said the cardinal. â€œOur souls become a manger, where the newborn Savior resides. We all become like Mary and Joseph, holding Christ close to us. The deepest desire of the human heart is satisfied.

This holy night, this silent night, “we come together to spend our Christmas here in this House of Bread, this new Bethlehem, at this miracle not on 34th Street but on Fifth Avenue,” said the cardinal, “with our Savior outside a manger in a manger to feed His people.

The small town of Bethlehem, in the City of David, where Joseph and Mary traveled and where Jesus was born, explained the cardinal, is the Hebrew word for “House of bread.”

â€œThe Messiah, our Lord and Savior, Jesus Christ, the promised one for centuries, was born in the House of Bread,â€ said the cardinal. â€œAnd then he was placed in a manger,â€ a manger, the wooden box where the food for the cattle and the sheep was kept.

Retired Pope Benedict XI, the cardinal said, has linked the theme of the House of Bread and the Nativity scene “in his Christmas book.”

The manger becomes a reference to the table, the altar of God, explained the cardinal.

“It is the Holy Child who, 30 years later, will miraculously feed these 5,000 with bread, who will announce himself as the Bread of Life and who, the day before his death on a cross, will exhort his friends: ‘This is my body, this is my blood, take it all and eat it. ‘

â€œThus, from his birth, on that silent night, the Savior was already teaching us the Holy Eucharist, the Mass where he nourished his people with the bread of life in holy communion. “

Christ came to be consumed, said the cardinal, â€œto nourish us, to satisfy the deepest hunger of the human heart, in his gift of the Most Blessed Sacramentâ€.

After the procession, Cardinal Dolan placed a statue of the Baby Jesus in the Christmas crib at a side altar. He then knelt in prayer in front of the Nativity painting and exasperated the serene representation of the Holy Family of Jesus, Mary and Joseph.

â€œA blessed Christmas to all and welcome to Saint Patrick’s Cathedral for midnight mass. We are all at home here for Christmas and we are delighted that you are all with us, â€the cardinal said to the congregation gathered in person. , and via the Catholic Channel, Sirius XM 129, the Catholic Faith Network, Pix 11 and the live broadcast from the Cathedral.

The cardinal recognized the presence of â€œbrother bishops, priests and deacons, men and women religious, a beautiful representation of our Coptic Orthodox brothersâ€, as well as Rabbi Joseph Potasnik, executive vice-president of the Council of Rabbis of New York.

The prayers of the faithful were offered in English, Italian, German, Creole, Igbo, Polish, Chinese, Spanish and Tagalog.

The Covid-19 was among the prayer intentions: â€œFor all those who suffer from the effects of the pandemic, so that they receive from God, who in Jesus became man for us, strength and serenity of heart. “

Shea, speaking with CNY after mass, said, “It’s just a big event to be here, and it’s great to see my good friend, Cardinal Dolan.”

A Catholic and a former student of Xavier High School in Manhattan, Shea added that Christmas was about “faith and hope.” It’s a great night for all Catholics.

Father Salvo spoke with CNY in the doorway of the cathedral after mass as he and worshipers wished each other a Merry Christmas.

“It was one of the best Christmases of my life,” said Father Salvo, whose appointment as rector of the cathedral took effect on November 15.

â€œNot only tonight, but the whole season has been such a beautiful time to welcome so many people from all over the world and to excite how much the Cathedral is loved.â€