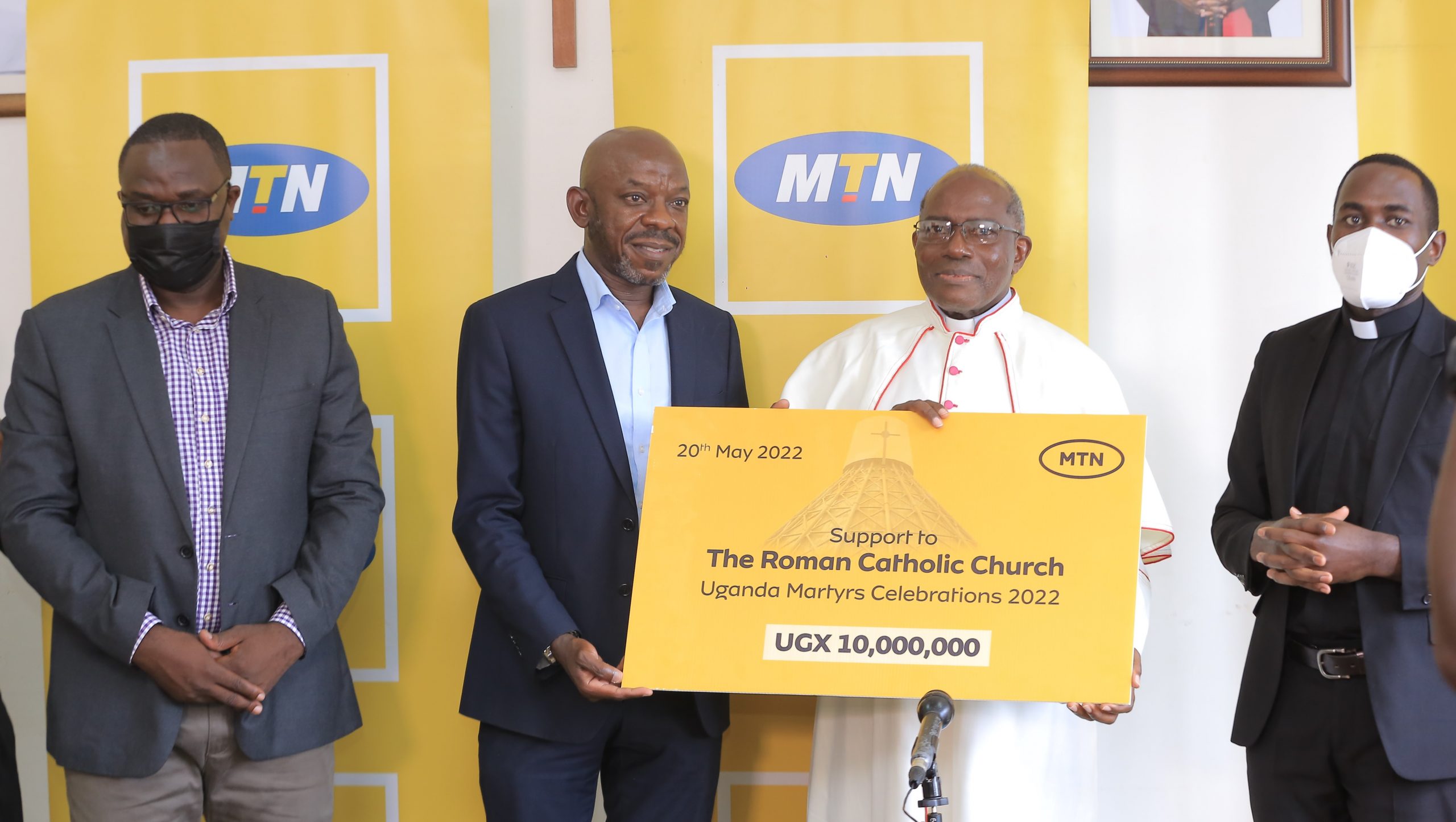 MTN Uganda has contributed 35 million Ugx shillings to support the Catholic Church’s preparations for the upcoming Uganda Martyrs’ Day celebrations. This support builds on a long-standing relationship between MTN and the Catholic Fellowship, which has seen MTN expand its support for its initiatives in recent years.

Of the 35 million shillings, Ugx.10Million will go to strengthening new Archbishop Paul Ssemwogerere’s preparations for Martyrs’ Day, while Ugx.25Million shillings will go to Fort Portal Catholic Diocese, which is expected to lead Martyrs’ Day celebrations of this year in Namugongo on the 3rd of next month.

MTN Uganda’s Managing Director of Human Resources, Michael Ssekadde, presented the check to Msgr. Charles Kasibante, on behalf of the Catholic Archbishop, Paul Ssemwogerere, at an event held in Kampala today at the Mother Cathedral of the Roman Catholic Archdiocese of Uganda -St. Cathedral of St. Mary – Rubaga. Another check for 25 million Ugx shillings will be handed over to the Catholic Diocese of Fort Portal on Monday, May 23.

Michael Ssekadde hailed the Catholic Church for its unwavering commitment and resilience in spiritually nurturing the community amid the many challenges it faces today.

“Religious institutions play an essential role in feeding us. Therefore, we as MTN feel very honored and humbled to be associated with the Catholic Church as they prepare to celebrate a historic milestone in the faith. We are committed to supporting the Catholic Church to ensure a successful celebration of Uganda Martyrs’ Day,” Ssekadde said.

Over the years, MTN Uganda has supported various Catholic Dioceses in organizing this historically significant religious day which attracts pilgrims from all over.

Last year, MTN Uganda supported the Diocese of Masaka with Ugx.20Million to help the diocese in its preparations for Martyrs Day celebrations.

Msgr. Charles Kasibante thanked MTN for its continued kindness to the Catholic Church and all other religious sects in general.

“We are indeed touched by your continued support of our initiatives as we embark on doing God’s work for his people. We thank you for this kindness that you have continually extended to us and it is our humble prayer God continue to bless all your efforts,” Kasibante said.

As it has done over the years, MTN, in conjunction with the Catholic Church, will officially mark Fort Portal pilgrims next week, Monday May 23rd. MTN will also provide pilgrims with refreshments during their week-long pilgrimage on foot to Namugongo Catholic Shrine in central Uganda, ahead of Martyrs’ Day celebrations.

MTN will further sponsor the broadcast of activities leading up to the Martyrs’ Day celebrations, as well as the day’s debates on local television channels. This will allow people who may not be able to gather at the Namugongo Catholic Shrine to follow the celebrations remotely.

Uganda Martyrs’ Day is observed every June 3 to commemorate the 45 martyrs, Catholic and Anglican, who were killed on the orders of Kabaka Mwanga II, then King of Buganda between 1885 and 1887.

This year marks the 58th anniversary of the canonization and sainthood of Uganda Martyrs by Pope Paul VI on October 18, 1964.