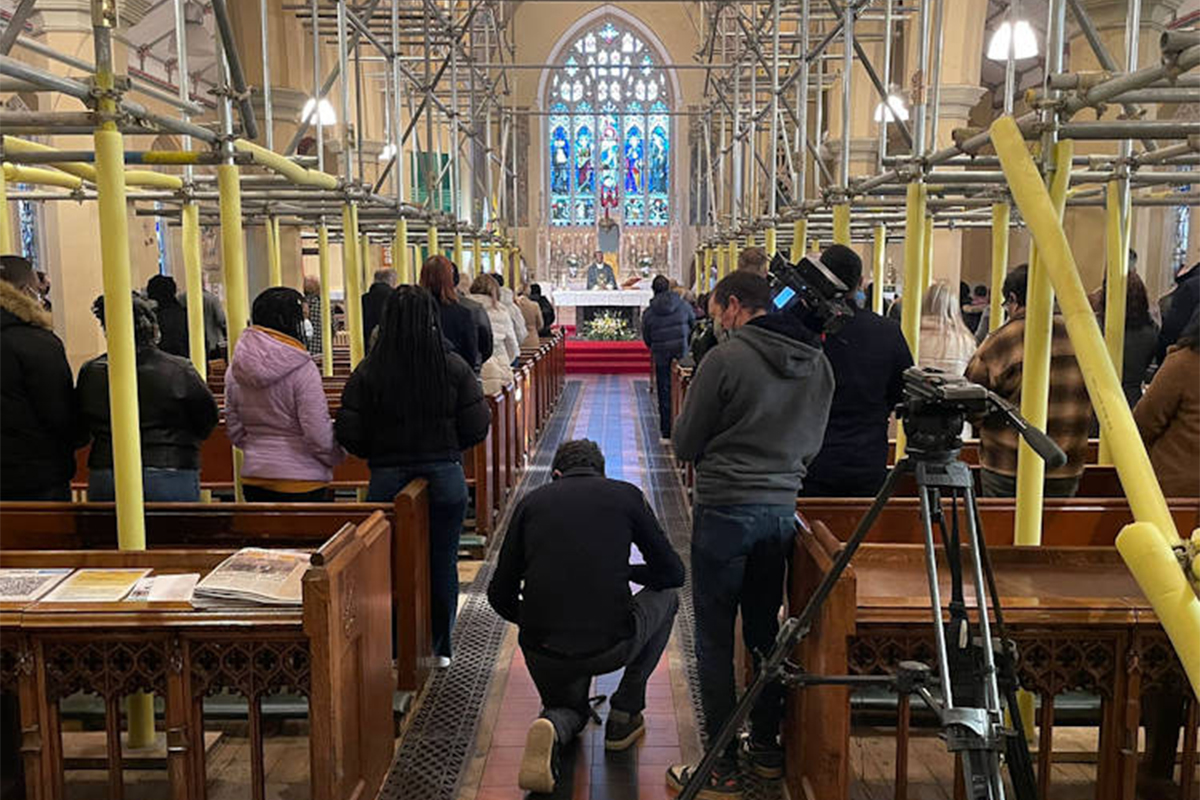 Historic England has released a short video which tells the story of the ongoing restoration of St Mary’s, Great Yarmouth, after water damage to its roof and priceless murals.

St Mary’s roof has been leaking for many years causing damage to the beautiful interior murals. This was devastating to the community, but the costs of renewing the roof were beyond the reach of the parish despite fundraising efforts.

However, over the past two years, St Mary’s has been fortunate to receive funding of £446,730 from the Catholic Bishops’ Conference of England and Wales, which in turn has received funding from money from the Government’s Culture Recovery Fund, which was administered by Historic England as part of an urgent repair programme.

After receiving first-round funding, work began with the re-roofing of the chancel and side chapels, which was completed last summer. Late last year St Mary’s found it had once again successfully secured funding for the next phase of the project to keep this important historic building watertight and prevent further deterioration beautiful interior decoration. The works will remove the existing concrete tile roof coverings from the roofs of the nave and aisles and replace them with Welsh slate to match that fitted to the chancel and side chapels as part of the first series works and should be completed by June 2022.

Historic England was so impressed with the story of St Mary’s that it decided to feature the works as part of its Celebration of the Grants scheme. A team from Bonfire Films in London are creating a short video about the project which will be shared on the Historic England website and social media.

The team interviewed Father Anthony Nwankwo, Brian Lafferty (chairman of the parish finance committee), Suzi Pendlebury (architect) and many parishioners, capturing inspiring images of the large multicultural congregation giving thanks among the scaffolding.

The mass took place under the interior scaffolding which covers the entire ceiling of the nave; with scaffolding posts placed among the benches, it was a constant reminder that the next phase of the long-awaited work was finally beginning.

Fr Anthony led the congregation in a round of applause in thanks for the funding and everyone then gathered in the parish hall for tea and cake to continue the celebrations.

Once the church is watertight, the parish can focus on other items on its ‘wish list’, the first of which would be to restore the Our Lady of Yarmouth fresco which was nearly destroyed by water from the roofs who are fleeing. The parish also wants to expand its reach and renovate the parish hall so that it can be used for a wide range of community purposes.

Does Christianity condemn alcohol or drunkenness?