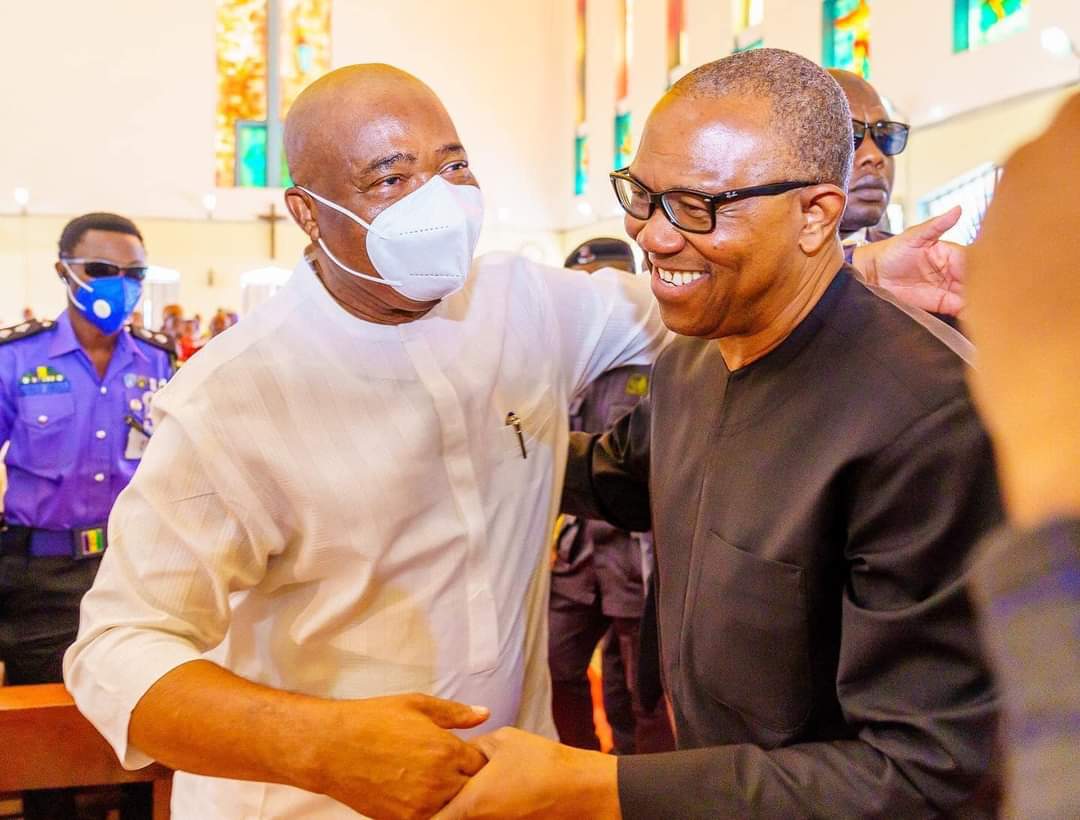 The congregation at Assumpta Cathedral Church, Owerri, last Thursday was unusually larger than the usual gathering of worshipers for normal ritual Mass orders. It was the official inauguration of the new Archbishop of the Archdiocese of Owerri, Archbishop Lucius Iwejuru Ugorji; and the great departure of his immediate predecessor, Archbishop Anthony Obinna.

This colorful event attracted the cream of the crop from the Southeast and beyond, including politicians, captains of industry, academics, government officials and the general public.

In an almost dramatic and sensational way, the course of the day changed in matter that transformed the church more into a political gathering than a center of worship. The priest who presided over the centerpiece ceremony of the day introduced the Governor of Imo State, Senator Hope Uzodimma as one of the special dignitaries present at the event.

At the mention of Uzodimma, an expected round of applause circled the church pews. And then it seemed that the Second Coming was near when the priest introduced Mr. Peter Obi – there was thunderous applause; shouts of joy and jumps of jubilation that lasted more than 10 minutes.

It took the intervention of the coordinating priest to ask for silence. The presiding priest reminded the congregation that they were still in the church and therefore demanded ‘magnia silentia’ (absolute silence) even though he jokingly rebuked the members that he knew they wanted to be OBIdient !

At the time, the Governor of Imo State looked visibly displeased, but he was aware that there was absolutely nothing he could do about it. This was a situation where a visitor overshadowed the event owner. Truly and politically speaking, it was a pathetic day for the Chief Executive of Imo State.

Uzodimma further received an unexpected drowsiness when the Altar Boys of Assumpta Cathedral banned the Imo State Government House Protocol Team from stepping onto the podium. of the governor bearing the official seal of the government. In the end, Uzodimma’s assistants didn’t like it.

Although they did nothing about the wave of applause given to Obi, they strongly protested Uzodimma’s inability to present his speech at his official podium with the seal of the state government. ‘Imo.

In particular, the Governor’s Senior Special Assistant on Networks, Lady Chantel Chinyere Adanna, bounced out of the church fuming and threatening fire and brimstone. She accused the Catholic Church of disrespecting constituted authority, ridiculing anything that barred her patron from using his official seal while addressing the congregation at Assumpta Cathedral.

In a statement after the event, Chantel noted as well; “The fact that the Catholic Archdiocese of Owerri did not allow Governor Uzodimma to use the lectern with the official seal when he delivered his speech at the inauguration of the new Archbishop of the Archdiocese, His Grace , Mgr Lucious Ugorji, means contempt and abuse towards a Catholic Governor, lack of respect for a constituted authority…

Every election year, the Catholic clergy will always seek to have their fellow Catholics elected governor, especially in Imo State. But as soon as they get it, they are always the first to fight, disrespect, denigrate and abuse the Catholic Governor.

Responding to allegations of abuse and disrespect, a Catholic priest who works at Assumpta Cathedral but does not want his identity made public noted that the church does not discriminate.

“I have yet to read this as first hand information where Governor Uzodimma’s assistant made the claims you have stated here. But the fact remains that the Catholic Church does not look at faces.

“The church has law and order which it follows very strictly regardless of religion, social status or gender. We follow what has been established and laid down in law.

“To begin with, Uzodimma is not the first governor to visit Assumpta Cathedral. Before him, we have heard all kinds of government officials visit the cathedral, ranging from presidents or heads of state, civil governors and soldiers, ministers and even ambassadors.

“Let’s even limit ourselves to 1999 until today. All the governors – Achike Udenwa, Ikedi Ohakim, Rochas Okorocha and Emeka Ihedioha – have at one time or another visited this place and at no time did they use the official government seal to display their addresses.

“Therefore, I don’t understand what the feud is about,” he enthused.

All over the capital Owerri, eruption everywhere since last Thursday has been Obi’s way of eclipsing Uzodimma at Assumpta Cathedral. This may have been what angered Imo State government officials to go public with their anger and frustration at the Catholic Church authorities for not allowing Uzodimma to use his official seal. to present his speech.

Saint Bakhita’s love for the Master