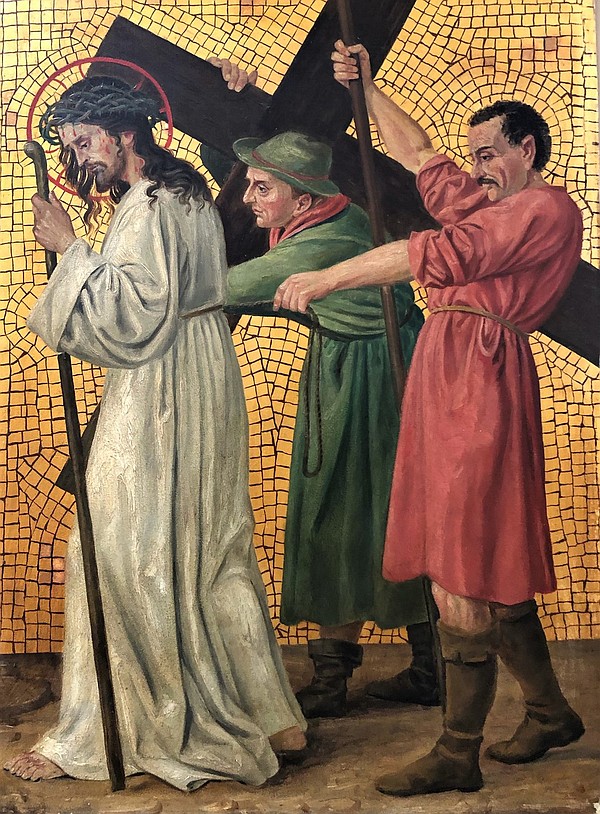 Old stations of the cross being restored for the cathedral

Whenever Westphalian artist Doris Davis goes somewhere to worship God, she wants to be able to come in and “feel” spirituality.

“People may not realize it, but when they walk into a church where everything is working and flowing, they can actually feel it instead of just see it,” she said. “All the art and special details help make this possible.”

Davis is restoring the Stations of the Cross that will be installed in St. Joseph’s Cathedral during the renovation and expansion that will take place there throughout the year.

Church architect William Heyer, architectural consultant for the project, acquired the stations in his home country.

They date from the early 20th century and previously adorned a now-closed Catholic church near Marion, Ohio.

In a style reminiscent of classical mosaics, the images painted in oil on copper represent 14 moments culminating in the crucifixion, death and burial of Jesus.

Heyer visited Davis’ studio in Westphalia, examined his work, and ultimately entrusted him with the task of restoring the Stations to their original brilliance.

She recently worked on the Stations of the Cross for St. Joseph’s Church in Westphalia and St. Thomas the Apostle’s Church in St. Thomas.

“I did a full restoration on those in Westphalia,” she noted. “Saint Thomas was more a repair and retouching of the figures, then the repainting and regilding of the exterior frames.”

Davis grew up in Taos, went to St. Francis Xavier School, studied fine arts, and is now a member of St. Joseph Parish in Westphalia.

She has contributed to the renovation of several churches in the diocese, starting in 1998 with St. Francis Xavier Church in Taos.

She was working as a graphic designer in a print shop when a member of the parish renovation committee asked her to touch up the mural on the ceiling above the altar.

Restoration consultant Tom Sader, who oversaw the renovation of Taos Church, guided her through the process.

She did the work while perched on a scaffolding on top of another scaffolding.

After that, she went to work for Sandbothe Painting & Decorating in Jefferson City, which helped renovate several local churches.

She also repaired some of the decorative paint and gilding of the Missouri State Capitol and the Governor’s Mansion.

“I love working behind the scenes,” she said.

She is now the owner of Davis Creative Painting.

Davis said the stations chosen for the cathedral are “in generally good condition.”

She noted that it was common for Italian artists at the beginning of the last century to apply oil paint to copper, “because it is a good, stable surface”.

She said she approaches each station with a heightened awareness of the small details that help draw people into the experience of the Lord’s total sacrifice.

“I really think about how this journey has been for Jesus, his mother, the passersby and all the other characters,” she said.

She also reflects on how the shadow of the sky, the texture of the ground, the colors of individual clothing, and other subtleties help create an ambience conducive to contemplation.

“They are all very special to me,” she said. “I go over every inch of every one of them I’m working on – technically and just because I’m in awe of the idea that I’m even doing this.”

Davis considers it a privilege to play a part in the renovation of a church, let alone the cathedral of his home diocese.

“Whether it’s the plumber, the roofers, the architect or the artists, they all have to be for this place to ‘function’ as our place of worship,” she said.

She said applying her art to a sacred purpose helps her deepen her faith and improve her relationship with God.

“I’ve always loved artwork in a church and the story it tells,” she said.

It gives him joy to see the cathedral maintained and improved.

“What we have is something beautiful, and we should be happy that we take good care of it,” she said.

It will be the third Stations of the Cross to adorn the cathedral since its completion in 1968.

The original hand-carved wooden stations spent nearly 40 years in the cathedral before being moved to the reconstructed chapel at the Catholic Newman Center near Truman State University in Kirksville.

They replaced stations that were lost in a fire that destroyed the center in May 2007.

The carved marble stations that adorned the cathedral from 2008-22 are from Italy and previously adorned the chapel of the former high school of St. Thomas Aquinas Seminary in Hannibal.

They were donated to Helias Catholic High School in Jefferson City, where they will be placed in the school’s St. Pius X Chapel.

Since the cathedral serves everyone in the diocese, Bishop W. Shawn McKnight invites Catholics from all parishes to contribute to the cost of the renovation, as long as it does not reduce their regular and sacrificial support to their own parish.

He asks for prayers for the health and safety of everyone, especially the workers, during the renovation project.

Davis asked for prayers for God to guide his eyes and hands in the right direction as he restored the stations.

“He has already filled my heart,” she said. “I feel very blessed.”