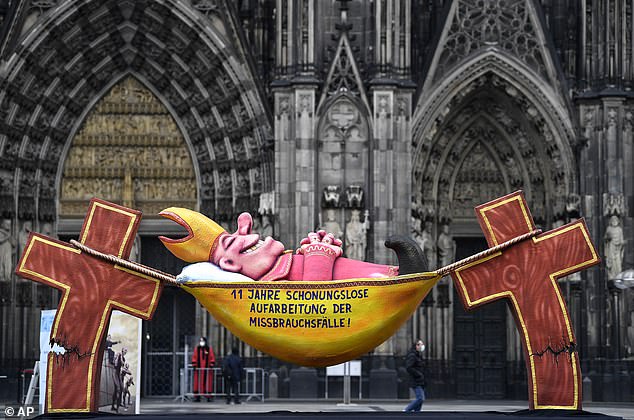 Hundreds of suspected cases of sexual violence by clergy and laity in Germany’s first diocese were uncovered in an independent report released Thursday and commissioned by the Roman Catholic Church.

The long-awaited 800-page report on the Diocese of Cologne found 202 alleged perpetrators of sexual assault and 314 victims between 1975 and 2018, Bjoern Gercke, a Church-mandated lawyer, told reporters.

“More than half of the victims were children under the age of 14,” Gercke said, noting that the results show “that for decades, apparently, no one dared to report such cases.”

However, the investigation exonerated the Archbishop of Cologne, Rainer Maria Woelki – a conservative who has long resisted reform – of breach of his obligations following these abuses.

Most of the allegations relate to the tenure of Woelki’s predecessor, Cardinal Joachim Meisner, who died in 2017.

In the photo: a sculpture by artist Jacques Tilly with the slogan “11 years of relentless investigation into cases of abuse!” is seen outside Cologne Cathedral in Cologne, western Germany, on March 18, 2021, as a long-awaited report was released into alleged sexual violence by clergy and lay people in the largest diocese in Germany

Woelki had faced months of protests for refusing to allow publication of an earlier study on abuse by priests in his diocese.

He had justified his decision by invoking a right to the private life of those accused in the report, carried out by a Munich law firm, and what he called a lack of independence on the part of some researchers.

His approach was called a “disaster” just at the end of February by Georg Baetzing, president of the German bishops’ conference.

Woelki said Bishop Dominikus Schwaderlapp and the head of a diocesan court, Guenter Assenmacher, were involved in a “cover-up” of the abuse cases.

Woelki pledged to take more concrete action next week after reading the report in its entirety. The report was handed to him at Thursday’s press conference when the findings were announced.

Gercke’s findings also identified 11 cases of dereliction of duty by the current Archbishop of Hamburg, Stefan Hesse, linked to allegations of abuse against the clergy during his tenure as vicar general in the diocese of Cologne.

Pictured: German Cardinal Joachim Meisner, pictured at the Vatican in 2013. Most of the allegations in the report released Thursday cover the tenure of Meisner, who died in 2017

Government child sexual abuse commissioner Johannes-Wilhelm Roerig said in a statement that “the scale of abuse and dereliction of duty by Church leaders” was “shocking.”

“I hope that the independent investigation into sexual abuse in the Catholic Church will now be pursued with full determination and an unlimited will to find the truth in all German dioceses”, in the interest of the victims, he said. -he declares.

The abuse scandal is making headlines just as the Catholic Church has taken small steps to fight decades of abuse and a culture of enforced silence.

Pictured: Cardinal Rainer Maria Woelki holds the 800-page report on the Diocese of Cologne, which found 202 alleged perpetrators of sexual assault and 314 victims between 1975 and 2018, told reporters Bjoern Gercke, a lawyer appointed by the church

A study commissioned by the German Bishops’ Conference and published in 2018 showed that 1,670 clergy had committed some form of sexual assault against 3,677 minors, mostly boys, between 1946 and 2014.

However, its authors said the actual death toll was almost certainly much higher.

The revelations, which reflect pedophile scandals in countries like Australia, Chile, France, Ireland and the United States, prompted Cardinal Reinhard Marx, a prominent reformer, to apologize on behalf of the ‘German Catholic Church.

The Church currently pays victims an average of 5,000 euros (approximately $ 5,950) “in recognition of their suffering”, as well as to cover their therapy costs. The victims described the sum as woefully insufficient.

Meanwhile, each diocese in Germany has ordered a separate local investigation into abuses within its ranks.

The Cologne scandal has sapped the energy of efforts to carry out broader reforms at a time when the church is losing members, who in Germany pay a tax that goes to church activities, including charitable work.

A guard stands at the entrance to Cologne Cathedral in Cologne. Following Thursday’s damning report, Woelki said he was suspending two Church officials in Cologne, Bishop Dominikus Schwaderlapp and the head of a diocesan court, Guenter Assenmacher.

Woelki had faced months of protests for refusing to allow publication of an earlier study on abuse by priests in his diocese. In the photo: a page of the report

The German Catholic Church had 22.6 million members in 2019 and it is still the largest religion in the country, but that number is two million lower than in 2010, when the first major wave of child abuse cases has been revealed.

Among the reforms on the table, in the face of opposition from Woelki and the Pope, are a reassessment of celibacy in the clergy, married priests and a greater role for lay people and women in the Church.

In a setback for members calling for greater openness, the Vatican said on Monday that the Church had no power to bless same-sex unions, declaring it was impossible for God to “bless sin.”

Live Holy Week with the Roman Catholic Archdiocese of Washington