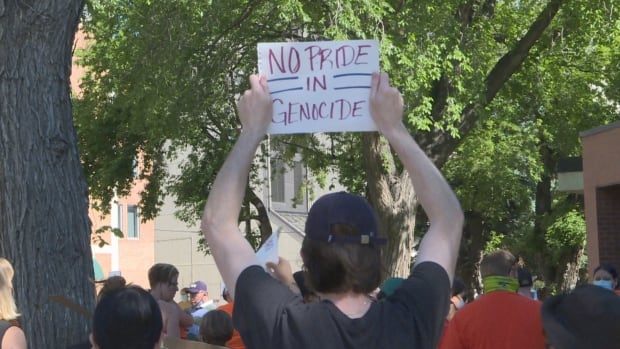 A sign reading “Thou shalt not kill” covered with a red handprint was among the signs carried by protesters outside St. Paul’s Roman Catholic Co-Cathedral in Saskatoon on Sunday morning.

Protesters, many dressed in orange, say they want to send a clear message to the Roman Catholic Church: they want action and accountability on the continuing effects of Canada’s system of Indian residential assimilation, which has deprived indigenous peoples of their culture and of those close to them.

Earlier this week, several handprints were added to the exterior of the church in red paint, alongside the words “We Were Children,” during a protest after hundreds of anonymous graves were discovered in Colombia. British and Saskatchewan.

The paint was quickly removed and the act condemned, but church officials say they understand people are angry.

Sarah Smokeyday, a member of the Kinistin Saulteaux Nation Band who organized the event, hopes the gathering of more than 50 people will spark church leadership: While they may remove the demonstrative artwork, they cannot refuse those who call for responsibility.

“I feel like the Catholic Church is really trying to wash its hands of their ownership of the issues that have arisen,” she said. “I wanted to make sure they can’t just wash us.”

Smokeyday says members of the Indigenous community want information from the centers for locating stolen loved ones, an apology from Pope Francis on Canadian soil and, most importantly, action.

She says the power of the church is ingrained in the congregation and believers must call for change and demand that church leaders stop protecting those who have caused so much harm.

“The congregation can really implement a lot of change by asking these questions,” Smokeyday said.

“Sunday shouldn’t be a holiday,” she added. “This should be the time for the congregation to really cry out and put a face and a name on what’s going on.”

CBC News contacted St. Paul for a response to the protest, but none were immediately received.

Stephanie Moss, a Catholic, says she is coming to a number of difficult accomplishments as a member of the church. The discovery of the graves deeply moved her, as a human and a Catholic, and she does what she can to support her grieving Indigenous neighbors.

“The main question I asked myself was, ‘What would Jesus do?’” She said, her voice shaking. “He was sitting with people who were in pain. He was sitting next to them, and not just that, he was lifting them up. So I came here to just sit in their pain, feel them and be there to. them.”

Moss says she wants to show those who are grieving that there are good Catholics who care, are willing to listen, and while that will never be enough, do whatever they can to help them heal . She says that for those in the church who still question her role in the deaths, need to step back and listen.

“Please find out what happened,” she said, acknowledging that she still had work to do.

“Just reach out and show your support and keep some space for indigenous people right now,” she said. “This is the bare minimum that you can do as a Catholic, as a disciple of Jesus, as a human being.”

Smokeyday, who works as an advocate for justice, says colonial systems separating indigenous families still exist, but in different forms.

She says that is why it is important that funding is diverted from child and family services and the justice system to Indigenous communities, so that families who have experienced colonial trauma can get the support they need. they need to heal.

“They grew up in a school, with priests and nuns without love, without compassion, and then they are supposed to be able to know these skills and apply them in their parenthood,” said Smokeyday. “And instead of being supported, our children are taken and placed in systems, be it the justice system or the reception system, and these services receive so much financial support.”

It would only take “a fraction” of those budgets to do essential work of raising Indigenous families and communities.

Support is available to anyone affected by their residential school experience and to those triggered by these reports.