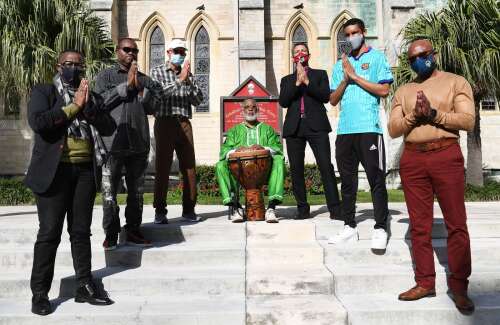 Yesterday activists remembered the life and example of anti-apartheid militant hero Desmond Tutu on the steps of Anglican Cathedral in Hamilton.

The rally to commemorate the South African activist and Anglican Archbishop was called by activist Glenn Fubler, a leading figure in the Bermuda anti-apartheid movement.

Mr Fubler highlighted the cathedral’s connection to Archbishop Tutu, during a visit in 1985 by his mentor, the English anti-apartheid activist, Archbishop Trevor Huddleston, who was invited to the island by the Bermuda Anti-Apartheid Coalition.

Archbishop Huddleston had worked as a priest in the town where Archbishop Tutu grew up.

Mr Fubler said: “From there Desmond Tutu chose, after having been a teacher, to enter the clergy.

“It has become a platform for his work to transform South Africa. “

He added: “Remember, back then, South Africa’s apartheid regime was a police state where those working for freedom were either killed, imprisoned, or exiled.

The Right Reverend Nicholas Dill, Anglican Bishop of Bermuda, led a prayer of thanks for Archbishop Tutu’s “extraordinary contribution, not only on the world stage, but in his home country as a force of truth and reconciliation ”.

The group was joined by Aaron Crichlow, a founding member of the Bermuda Is Love volunteer group, which he said was created to promote “love for our community and our environment.”

He is the grandson of Erskine Simmons, a leading member of the Progressive Group that helped demolish Bermuda’s racist apartheid policies with the 1959 nonviolent boycott of the theater.

Cordell Riley, interim president of Citizens Uprooting Racism in Bermuda, said more than 1,000 people participated in the organization’s truth and reconciliation conversation, inspired by the example of Archbishop Tutu.

He added: “Solidarity is one of the main principles of trade unionism, especially for the BPSU. “

She added, “One of the things I liked about Elder Desmond was that he was able to understand the intersectionality between all causes of injustice.

He said 2022 should be the time to “embrace the example of this small but giant-hearted man who has left an example for us all”.

He highlighted a joint statement in favor of 2022 as a celebration of the memory and legacy of Archbishop Tutu.

· To read the Joint Statement in full, click on the PDF under “Related Media”.

Humanity A common aspect between Islam and Christianity: bishop