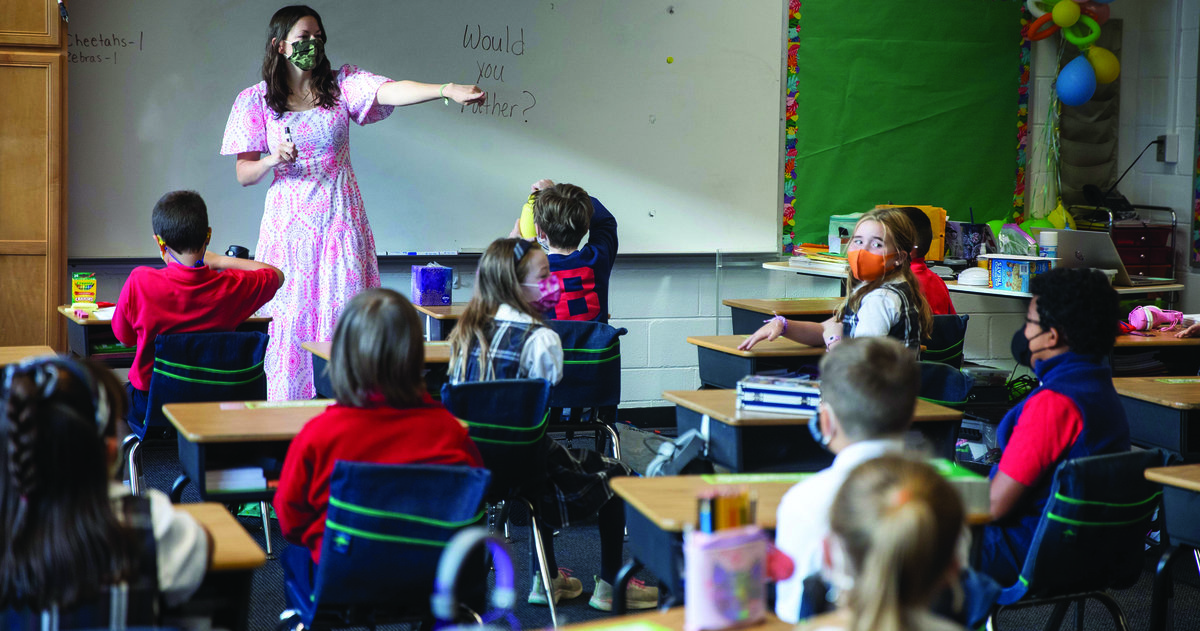 The relaxation of the masking mandate in Catholic schools in Maryland was announced by Kelly Branaman, archdiocesan secretary for Catholic schools and superintendent of schools, in a Feb. 17 letter to parents and guardians.

“We met with school leaders to organize and prepare their communities. Based on the readiness needs of each school’s leadership, schools will transition between February 21 and February 28,” Branaman wrote to parents. “We appreciate and will fully support any decisions parents make for their own children about whether or not to wear a face covering at school. Enforcement of this decision is between the parent and the child, not the school staff.

Branaman said face coverings will be “voluntary and optional in jurisdictions where possible.”

Making compliance with the new masking policy voluntary “will allow our parents and staff to decide what they think is right based on their own circumstances,” she said in the letter. “This approach balances the desires of parents, students and staff who wish to continue wearing masks with those who do not, while keeping our schools safe.”

Branaman noted that while students and parents can decide whether or not to wear a mask at school, “CDC and local regulations still require anyone using public transportation, including students using school buses public, continue to wear a face covering.”

In Maryland on February 14, Gov. Larry Hogan announced that masking mandates will be lifted in state buildings beginning February 22. This relaxation of masking requirements does not include public schools. The state Board of Education is scheduled to meet Feb. 22 to consider its masking mandate.

In the District of Columbia, students, staff and visitors to Catholic schools across the city will continue to be required to wear masks.

On Feb. 14, DC Mayor Muriel Bowser said the district would relax masking requirements starting March 1. On that date, masks will no longer be required in churches, grocery stores, restaurants and bars, and sports and entertainment venues. Masks, however, will still be needed in schools, libraries, healthcare facilities and on public transport.

“Catholic schools located in the District of Columbia remain subject to the district’s masking order,” Branaman wrote to parents and guardians. “As we receive additional updates regarding any status changes in the district, we will continue to share this information with our school communities.”

She added that the Roman Catholic Archdiocese of Washington is “advocating with city officials to make face coverings optional for our school district families.”

The Roman Catholic Archdiocese of Washington has more than 25,500 students enrolled in 90 Catholic schools, from kindergarten through high school, located in the District of Columbia and five counties in Maryland: Montgomery, Prince George’s, Charles, Calvert and St. Mary’s.

Since March 2020 – when the pandemic was first declared – Catholic schools have implemented safety protocols and teaching strategies to ensure the well-being of students and staff. These protocols included health screenings, following masking mandates from the various jurisdictions that make up the Archdiocese, limiting visitors to schools, and adopting different teaching methods such as blended and distance learning. After school campuses closed as a precaution in the spring of 2020 due to the COVID-19 pandemic, many Catholic schools in the Archdiocese reopened for in-person learning this fall, while other schools offered virtual classes. or hybrids. In the current 2021-22 school year, all Catholic schools in the Archdiocese have reopened for in-person learning.

“While masking has been one of the health and safety protocols that has kept our schools open, experts have begun to recognize that masking children has its downsides,” Branaman wrote in his letter of the February 17. “We recognize that many parents and students have asked for measures such as mask requirements to be relaxed more quickly. Others say they would feel more comfortable maintaining precautions a bit longer.

Branaman said the Archdiocese’s decision to change its masking requirements was based on several factors:

• A growing consensus of local experts and across the country has determined that it is now safe to eliminate mask mandates for schools.

• Localities with indoor mask mandates have begun announcing plans to lift those requirements in most indoor settings.

• Significant numbers of people have been vaccinated, including younger children, and Catholic schools in Maryland and the District of Columbia are in one of the most vaccinated areas in the country.

• The number of cases has also steadily declined locally over the past month as a result of the delta and omicron variants.

“The health and safety of the young people in our care, as well as that of our staff, is of the highest priority in the schools of the Roman Catholic Archdiocese of Washington,” Branaman said. “This has been no less true amid the COVID pandemic, during which (the Archdiocese) has sought to carefully balance the interests of student health and effective learning.”

Nationally, new coronavirus cases have fallen by more than 80% since a spike in the Omicron variant of the virus in January.

Branaman said Catholic schools in the Archdiocese “will continue to monitor local conditions and implement careful protective measures and mitigation strategies as we strive to provide safe, in-person education.”

“If a major spike in cases or a severe variant emerges, government authorities may reinstate a face covering requirement. As we have done previously, we will consult with medical experts and public health officials for guidance,” Branaman wrote. “All Archdiocesan schools will continue to adhere to applicable public health guidelines for those who test positive for COVID-19 and those who have been exposed. »