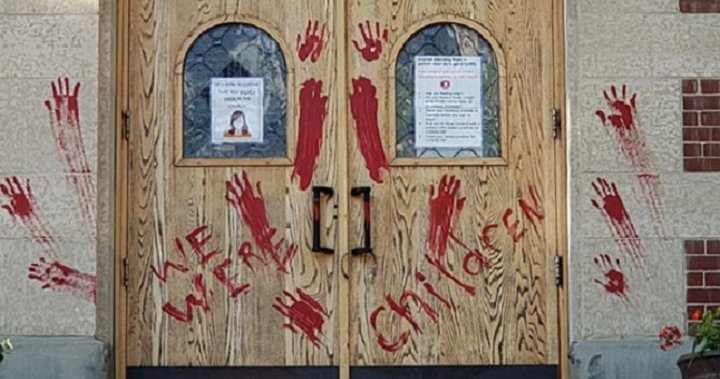 Red-painted handprints and the words “We were children” covered the doors of St. Paul’s Co-Cathedral in downtown Saskatoon on Thursday evening, following the announcement of approximately 751 anonymous graves found on the former site of the Marieval Indian Residential School on the Cowessess First Nation.

Bishop Mark Hagemoen of the Roman Catholic Diocese of Saskatoon said he was at the Cathedral of the Holy Family on Thursday evening when he heard the news of what was going on.

â€œThe rector called me with concern about the painting that was spread out at the entrance and part of the threat of violence that seemed to develop in terms of interactions in front of the cathedral,â€ Hagemoen said.

“[From] As I understand it, the police were there and arrived fairly quickly at the entrance to St. Paul’s. People were very concerned about the degradation, destruction and damage. “

Hagemoen said he believed there were people inside the church at the time of the event.

“Tensions are high, but I think that has to be somehow understood,” Hagemoen said.

â€œIndigenous and non-Indigenous peoples and Catholics included have a genuine heart for what is happening right now in terms of the larger context of the discovery. “

Hagemoen said there is a reconciliation commission within the Roman Catholic Church made up of elders and other indigenous and non-indigenous people working together.

â€œIt reminds meâ€¦ to find out the truth about who and the circumstances of the residential school sites burial, then move to a place of honor,â€ Hagemoen said.

The recent find comes weeks after 215 unmarked burial sites were reported at a Kamloops residential school.

Saskatoon police confirmed their presence to Global News in an emailed statement Friday and said they had been in contact with church officials and protesters.

â€œIt is understood that two people participated in the application of the paint; however, a larger group was present for the demonstration. No charges have been laid, â€police said.

The paint on the church has since been removed.