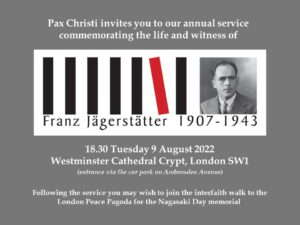 This year’s service to commemorate the life and testimony of Franz Jagerstatter will take place in the Crypt of Westminster Cathedral at 6.30pm on Tuesday 9 August. It was organized by members of Pax Christi England and Wales. After the service, people may wish to join the interfaith march to London’s Peace Pagoda for the Nagasaki Day Memorial.

Pax Christi was delighted to hear Pope Francis offer Franz’s testimony to the young people gathered in Prague in early July. He challenged them to rebel against the norm, to accept war and violence, and to be guided by conscience, as Franz was. Acknowledging the tragedy of war, including Ukraine, Pope Francis said:

“Now we must all commit to ending this terrible war, where, as usual, a few powerful people decide and send thousands of young people to fight and die. In cases like this, it is legitimate to rebel!

“I would like to invite you to get acquainted with the extraordinary figure of a young objector, a young European with “broad eyes”, who fought Nazism during the Second World War. His name was Franz Jagerstatter, and he was beatified by Pope Benedict XVI Franz was a young Austrian who, because of his Catholic faith, made a conscientious objection to the injunction to swear allegiance to Hitler and go to war… Despite the cajoling and torture, Franz preferred to be killed than to kill He considered the war totally unjustified If all the young men called to arms had done like him, Hitler could not have carried out his diabolical plans. Evil needs accomplices.

“Franz Jagerstatter was executed in the same prison where his contemporary Dietrich Bonhoeffer, a young German Lutheran theologian and anti-Nazi, was also imprisoned and met the same tragic end.”

Here is the link to the full speech on: www.vaticannews.va/en/pope/news/2022-07/message-pope-francis-european-union-youth-conference-prague.html

Resources on the life and influence of Blessed Franz Jagerstatter are available at: https://paxchristi.org.uk/resources/peace-people-2/blessed-franz-jagerstatter/