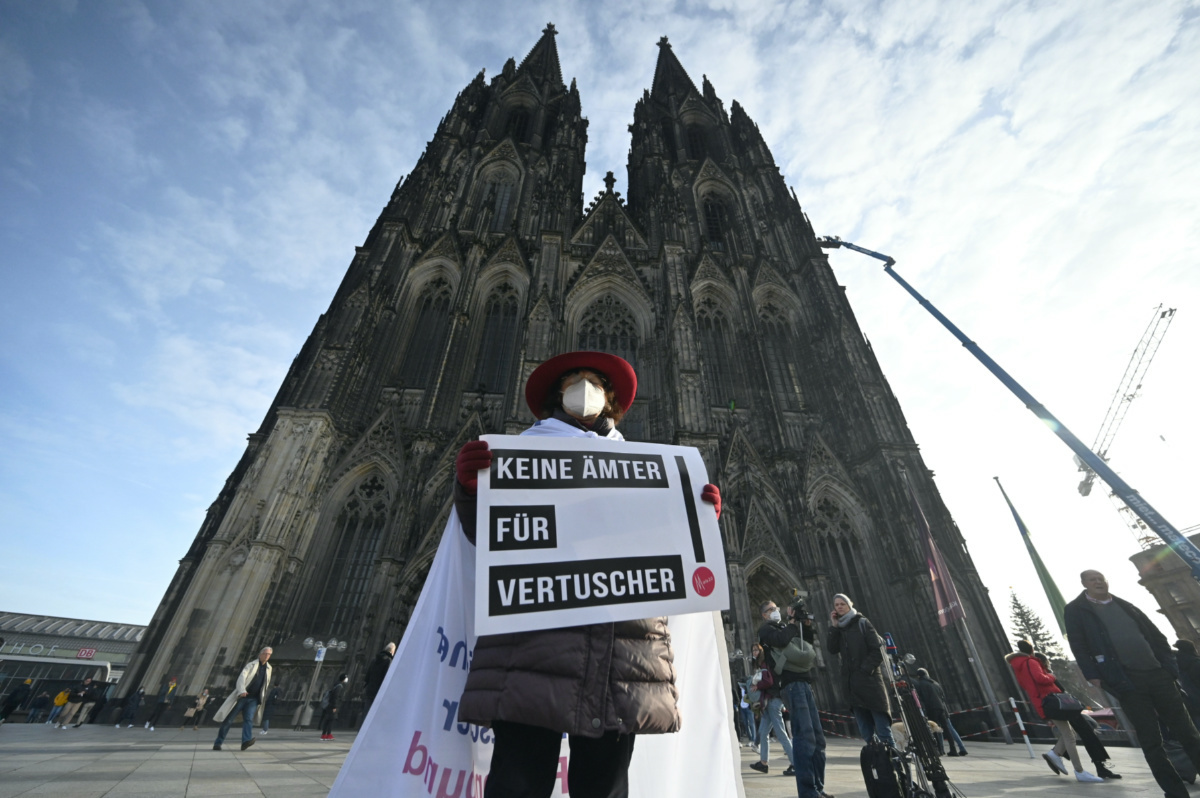 The German Catholic Archdiocese of Cologne held a penance service for clergy sex abuse cases on Thursday, saying the ritual was not an absolution for the perpetrators but a “confession of guilt”.

The German Catholic Church’s handling of sexual abuse reports has sparked a crisis in Cologne, where the Archbishop, Cardinal Rainer Maria Woelki, has taken a “spiritual timeout” on the advice of Pope Francis.

A participant of a rally of the Maria 2.0 initiative holds a poster with the inscription ‘No offices for concealment’ in front of the cathedral in Cologne, Germany, Thursday, November 18 before the start of a penitential service of the Archdiocese of Cologne dealing with sexual violence. PHOTO: Henning Kaiser/dpa via AP.

“A large number of crimes of sexual violence against wards have been committed by priests and other church employees in our diocese,” Steinhaeuser said during the service at Cologne Cathedral.

The auxiliary bishop said that as the current head of the archdiocese, he is the “head of the responsible organization for the Archdiocese of Cologne”, German news agency dpa reported.

“This service does not end with forgiveness,” Steinhaeuser said. “We can’t absolve ourselves. We also don’t apologize to the people involved, just to feel better.” Rather, he said, the service was intended as a “confession of guilt, remembrance of those affected, intercession.”

Woelki, the Archbishop of Cologne, has become a deeply divisive figure in the German church.

In September, Pope Francis decided to leave Woelki in power despite massive criticism of his handling of the church sex abuse scandal. The pontiff instead granted the cardinal a “spiritual delay” of several months after he made “major errors” in communication. The break extends from mid-October to early March.

A report commissioned by Woelki and published in March found 75 cases in which eight high-ranking officials—including his late predecessor—neglected their duties to follow up, report, or sanction alleged abuse by clergy and lay church employees, and did not not take care of the victims.

Archbishop of Hamburg Stefan Hesse, a former top church official in Cologne, has been charged with 11 cases of dereliction of duty. Hesse offered his resignation to Francis, who rejected it last week.

The report absolves Woelki himself of any negligence of his legal obligations to victims of abuse. He later said he had made mistakes in past cases involving allegations of sexual abuse, but made it clear he had no intention of quitting.

Woelki has previously infuriated many local Catholics by citing legal concerns to keep secret an initial report of how local church officials reacted when priests were accused of sexual abuse. He commissioned the second report, and a German law firm produced an 800-page investigation.

Karl Haucke, 71, who was sexually abused for several years at a Catholic boarding school, was unimpressed with the church’s penance service. Haucke protested outside Cologne Cathedral with several other people on Thursday.

He said the church invited him to attend the service but he declined to attend.

“It’s inhumane to come to me with the demand for repentance,” Haucke told The Associated Press. “Of course I have a choice whether or not to go, but just bringing up the subject can bring people back to their memories. That’s not for the church to do.

Haucke suggested it would have made more sense to offer victims a space for a real investigation into the abuse.

“An alternative would have been for those who do not want to act according to church rituals to provide a different space on this memorial occasion,” he said. “A neutral space where it’s not about repentance and prayer, but about serious interaction, inquiry and understanding.

Bishop of Novaliches warns of Awol priests, those not ordained by the Roman Catholic Church