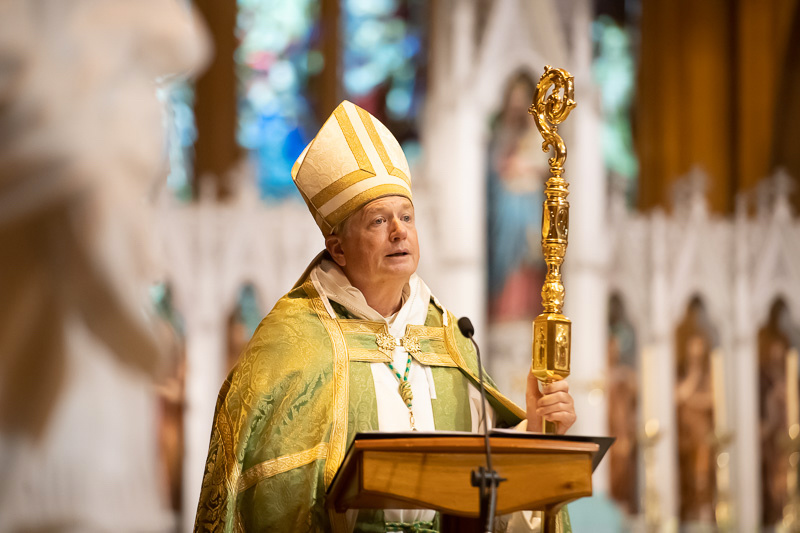 The first Plenary Council of the Australian Catholic Church since 1937 opened on Sunday, with COVID-19 restrictions forcing the original Adelaide meeting – delayed by 12 months – largely online.

The national meeting, involving 278 members across the country – including bishops, members of religious congregations and lay people – discusses a range of issues, including issues relating to the Royal Commission on Institutional Response to Sexual Abuse on children, the laws on euthanasia and the role of women in the church.

The role of First Nations peoples and the governance of the church are also on the agenda of the meeting.

Speaking from St Mary’s Cathedral in Sydney in his homily for the opening of the Plenary Council, Archbishop of Sydney Anthony Fisher said this was happening at an important time in the history of the Church in Australia.

“We need to tackle very contemporary questions, such as: How to deepen our spiritual lives amid the noise and bustle of modernity? How are we going to spread the Word in a society of declining faith, affiliation, and practice? How do we make sure that all of our institutions are “on the agenda”, so to speak?

“How do we heal the wounds of colonization or abuse and learn from First Nations peoples and survivors? How will we be the voices of the “little ones,” including the unborn, the dying and others “on the periphery” of our “throwaway society,” as Pope Francis has called it? How can we better structure and govern our Church in these times? ” he said.

He added that some “would fear another gabfest, making no difference”, but assured them that thinking and speaking is already action and “words can bring change”.

Meanwhile, a message from Pope Francis read during the opening plenary session this morning said the Plenary Council “represents a singular ‘journey together’ of God’s people in Australia on the paths of history to a meeting. renewed with the Risen Christ in the power of the Holy Spirit “.

The message, read by Bishop John Baptist Itaruma of the Apostolic Nunciature in Australia, stated that Pope Francis “pray that the Council will be a privileged occasion of mutual listening and spiritual discernment, marked by deep communion with the Successor of Peter ”, a term used to describe the Pope.

“In this conciliar process, the Church in Australia is challenged to listen to the voice of the Spirit and to bear witness to the eternal truth of the gospel and to develop new and creative expressions of evangelical charity,” said declared the message, signed by Secretary of State Cardinal Pietro Parolin.

The plenary council is the highest form of local church gathering and has legislative and governance authority, with decisions made in the council being binding on the Catholic Church in Australia.

“Pope Francis invited the local Church to dialogue; contemporary Australian society has changed dramatically; and the Royal Commission on the Institutional Response to Child Sexual Abuse was an important and influential event that requires careful consideration and response, ”a church statement read.

“As the decision to hold a Plenary Council was announced by Australian Catholic Bishops, Archbishop of Brisbane Mark Coleridge declared that ‘the Church is no longer the presence in our society that it once was. We need to measure this and make decisions accordingly. The culture in which we have to share the Gospel is very different from what it was 20 or 30 years ago ”.

“The journey takes place over several years to give the Catholic community in Australia time to listen, dialogue and discern with one another and, guided by the Holy Spirit, on the future, role and the relevance of the Catholic Church in Australia. . “

Plenary Council facilitator Lana Turvey-Collins told Sight ahead of the Council that parts of the sessions, including Monday’s opening plenary, would be broadcast live but most of Thursday’s schedule would be out. line.

“These live broadcasts will allow God’s people to stay connected to the work of the Plenary Council, including through sharing the fruits of discernment,” said Turvey-Collins.

“During the six days of the first assembly, members will pray with the 16 agenda items and engage in the practice of spiritual conversations. We know that some parishes and families and other ecclesiastical communities are considering doing the same.

The second meeting of the Plenary Council will be held in Sydney from July 4 to 9, 2022.

Catholics make up 43% of Australia’s Christian community, according to the 2016 census.