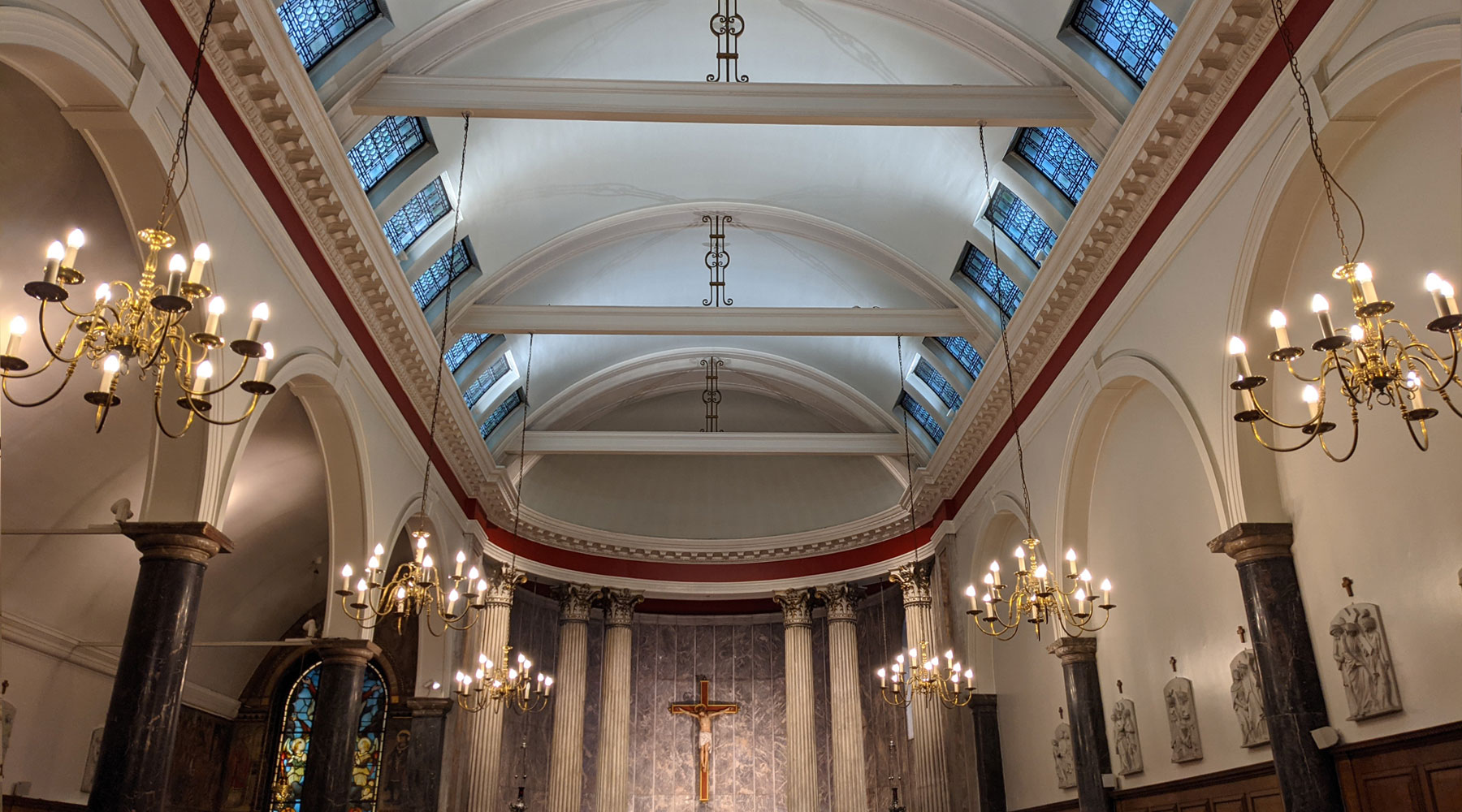 St Mary Moorfields – the only Roman Catholic church in town

Just around the corner from Liverpool Street station is a building which, if briefly looked at, looks like a conventional Edwardian office building, but is in fact the only Roman Catholic church in the City of London.

It has been on this site since 1903, but its history dates back to 1686, when a Catholic chapel was opened not far from here, but it had to close a few years later as a result of the Glorious Revolution, and the cult Catholic went somewhat underground. As a result of the Catholic Relief Act of 1791, Catholics were allowed to pray in public, and in 1820 a large Catholic chapel was built in the new Finsbury Circus.

As probably the most important Catholic church in the United Kingdom at the time, in 1836 it boasted a congregation of 30,000 people.

It was granted Pro-Cathedral status in 1850, when the Catholic hierarchy was reestablished in the United Kingdom, but the title passed to a Kensington-based church in 1869 as the town’s population dwindled. Such as big church was becoming a burden on a declining population, however, and in 1899 it was decided to sell the building.

Some reports say the church was demolished to make way for the Metropolitan Railroad, but that was built in 1875. In fact, it was a simple matter of Mammon at work – they sold the church to a commercial property developer for the hefty sum of £ 201,000 – half of which went to support the construction of Westminster Cathedral, and the rest for a smaller church to be built locally. This was not an easy thing to do, as there was a principle that consecrated sites could not be sold for secular purposes, and a decision by the Congregation of Cardinals in Rome confirmed this policy. The church appealed to Pope Leo XIII, and he overturned the decision, authorizing the sale of the church.

Before the church was demolished, some 5,000 bodies were in the catacombs below the church and had to be moved to a cemetery at the end of Waverly Avenue in Wembley, now known as Saint-Joseph cemetery next to Saint-Joseph Catholic Kindergarten.

The church closed at the end of September 1899

A few years later, the March 25, 1903, the replacement church – the current one – opened on nearby Eldon Street. The exterior of the church is obviously a church when you look at it, although a casual glance would probably not notice that the decorative elements are Christian in nature.

The four panels show the Annunciation, the Nativity, the Deposition and the Assumption, and above these is a statue of the Virgin and Child Jesus, crowned with cherubs.

The church itself is set back from the road, behind the two shops and a small office building above the entrance. The double doors, go down a few steps to a church below, reputed lowered to deal with old light shielding issues with their neighbors, and through a few more doors in the main church.

Although much smaller with a capacity of 400 people, it was designed in-house to look a lot like its demolished larger predecessor.

An old stained glass window has been preserved and has been reinstalled here, although the church does not have exterior windows, so it is backlit with electric lights. Cleverly enough, as the church is surrounded on all sides, daylight enters through a row of windows in the curved ceiling.

However, when the church was built it was not in the City of London, so how is it now described as the only Catholic church in the City?

The church was once located in Hackney, but the redistribution of the boundaries in April 1994 (pdf) saw the City of London expand to engulf the Broadgate office development, which was under construction at the time but was located halfway between the City and Hackney boroughs. As part of the cleanup of this problem, the north side of Eldon Street, including the Catholic Church, became part of the City of London.

This probably makes it the City of London’s first Catholic Church for around 300 years, and only thanks to a bureaucratic change in electoral boundaries, otherwise the City could still be, officially at least, free from Papist worship.