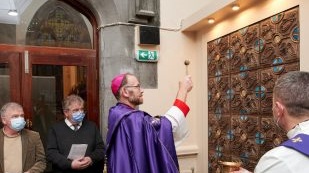 In what is considered a first in Ireland, a Catholic bishop has dedicated a columbarium in his cathedral where the cremated remains of parishioners will be buried.

Installed by local builders Michael Clancy and Michael McInerney, the columbarium has a capacity of 240 urns, with 104 niches already reserved. The first burial of the ashes will take place at the new columbarium on November 6.

The Catholic Church, in Ireland as elsewhere, has had considerable difficulty with cremation over the years, primarily because of its belief in the resurrection of the body after death. In 1963, he modified the teaching prohibiting cremation, while strongly expressing a preference for the burial of the dead.

Twenty years later, in 1983, its Code of Canon Law declared: “The Church strongly recommends that the pious custom of burying the bodies of the dead be observed; however, it does not prohibit cremation unless it has been chosen for reasons contrary to Christian teaching.

In a further development, a Vatican instruction in 2016 ordered Catholics to ensure that the cremated remains of loved ones are only scattered in consecrated cemeteries or stored in churches.

Cardinal Gerhard Müller, then prefect of the Congregation for the Doctrine of the Faith, accepted that cremations are increasingly popular, but insisted that the ashes of loved ones must be kept “in a holy place, ie a cemetery or a church or in a place that has specifically dedicated for this purpose ”.

“Keeping ashes in the house is not allowed. In addition, in order to avoid any form of pantheistic or naturalistic or nihilistic incomprehension, the dispersion of ashes in the air, on the ground, on water or in any other way as well as the transformation of the ashes incinerated into commemorative objects are not allowed, “he said.

Expressing the church’s preference for burials, he said, “We come from the earth and we will return to the earth. In remembrance of the Lord’s death, burial, and resurrection, burial is the most appropriate way to express our faith and hope in bodily resurrection.

He also said that dividing the ashes among family members or keeping them in jewelry was prohibited.

This was “not a set of discretionary guidelines,” a spokesperson for Ireland’s Catholic bishops said at the time, and may require the establishment of a columbarium in Catholic parishes.

Conservative Christianity as a threat to democracy – Baptist News Global