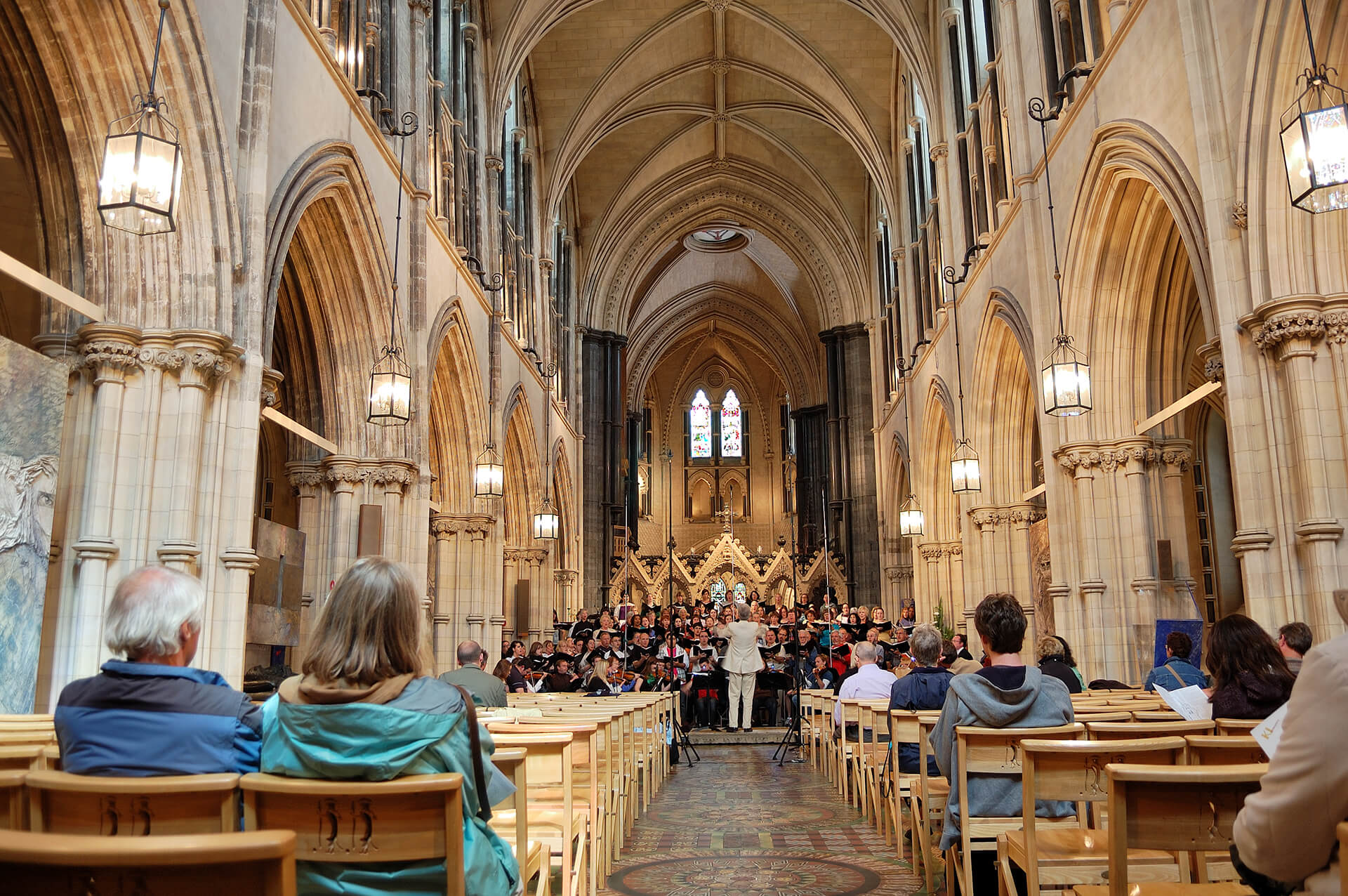 It is a great honor to be invited to speak at this important event.

I have lived much of my life within sight of the magnificent spire which is the centerpiece of the college.

My father told me that he had met a man sitting on the cross which is at the very top of the bell tower. He asked how the man had achieved this miraculous feat. The man paused for dramatic effect and then revealed he had been present when the bell tower was built and the cross lay on the ground waiting to be erected. So he sat on it, so he would have this great story to tell for the rest of his life!

Every time I looked at the bell tower, I thought of my father’s story, but I must admit that I didn’t give much thought to what was happening in the shadow of this magnificent bell tower within the college grounds.

Professor Michael Mullaney and Father Tom Surlis will give you an insight into their college plans. I hope that today’s discussion between people of different origins and generations can enrich the projects of Michael and Tom.

I would like to say why the work here is so important.

We need priests and religious.

We also need an educated Catholic laity capable of confidently spreading the message of the Faith.

The education of priests remains vital

First of all, allow me to say something about the central task of this seminary: the formation of priests. What did Vatican II say in 1965 about the role of priests? He said their “primary duty is the proclamation of the gospel of God to all” and, in the words of St. Mark’s gospel, “to go into all the world and preach the gospel to every creature.” .

But Vatican II also called Catholics those who “understand or believe little in what they practice” and added that the preaching of the word is necessary for “the very administration of the sacraments.” If it was a daunting task in 1965, it is even more so today. Families go through the stages rather than trying to figure out what baptism and first communion really mean for their children.

Vatican II also observed, “The office of pastor is not limited to the care of the faithful as individuals, but also extends appropriately to the formation of a true Christian community.”

I think Irish priests perform the first of these tasks very well. But, unlike the churches in the United States, I fear that they do less well the second task, the formation of true Christian communities in their parishes. Our churches are not even physically designed to encourage people to meet easily after Mass and make contacts that help to form a “true Christian community”, based and centered on the Eucharist according to the wishes of Vatican II. This is an essential first step towards involving the laity in the work of the Church. Practicing Catholics are a minority in Ireland, and they need to support each other.

The Growing Responsibilities of Lay Catholics and the Synod

In 1965, Vatican II declared that priests should “confidently entrust the laity with duties in the service of the Church, leaving them freedom and room for action”. This will be tested, 57 years later, by the Irish participation in the synod.

How many sermons have been preached in Irish parishes, explaining what the Synod is all about, explaining its opportunities and, of course, its limits? I don’t feel the job was done adequately in every parish, although I’m sure it was done very well in some.

Filling a void in thought in Ireland

The college could ask questions that go beyond the temporal and material concerns that occupy most of our waking hours in modern Ireland. It might help people feel comfortable dealing with deeper questions about life.

For example, what happens when we die? Is this life all there is? Can we communicate with God? Does he hear us? What is a good life? Does it have any meaning beyond doing no harm and causing as little pain as possible to others and to ourselves? What obligations do we have to other human beings, to born and unborn human lives? How can we best cope with suffering and setbacks in our lives? How do we keep them in proportion in our minds?

Not everyone will answer some of these questions the same way. Many will never even ask themselves these questions, claiming to be agnostic. I consider this type of agnosticism to be a form of laziness. It should not be confused with the residue of doubt we all have after considering these questions, questions to which there is no simple empirical answer.

But if, as a society, we avoid such questions, we are not living our lives to the full, in a sense. This college will enable people, both secular and religious, to feel comfortable discussing deep issues, thus helping them to live their lives to the full, with all of life’s complications.

We have experienced rapid changes, a change in what people consider more or less important. In other words, we have experienced a change in values. Laity and priests can react to this change either by taking refuge in a past that never really existed, or by simply moving forward with optimism and ignoring unpleasant tendencies, hoping that all will go well in the future. end.

In a recent address to priests, the pope took a very different view. He said we should instead “throw into the abyss” according to the words of Saint Luke’s Gospel, trusting in our God-given discernment to find the right path. Helping a new generation of Irish people, lay and religious, find the right path, learn from their mistakes and correct their course if necessary will be the task this college will undertake through the priests and lay people it educates.

The limits of individualism

In 21st century in Ireland, there is much more emphasis than ever before on the rights of each individual. These rights are growing in scope and scope and are being challenged by politics and the courts. But there is a strong emphasis on rights and the individuals who should enjoy those rights, rather than the community as a whole, shared responsibilities or the common good.

Social media has also facilitated the pursuit of fame, a desire for personal recognition. This is sometimes accompanied by a desire not to be judged oneself, but to be free to judge others harshly, hastily, and anonymously. “Being offended” can become a weapon in our culture wars. Feelings can be elevated, above thought and above careful objective reflection.

The mundane truth is that for every right there must always be a concomitant responsibility. Who is responsible? On the state and the taxpayer, on the family, on the local community or on the courts? Finding a formula to answer these questions was one of the objectives of Catholic social thought, which will undoubtedly be part of the academic activity of this college in the years to come.

The best antidote to problems of excessive individualism is a well-developed value system. By this I mean a way of evaluating what is most important and what is less – without dismissing anything as unimportant. This requires judgment, and we must not be afraid to judge.

It is important to remember that Catholic social thought is social. It is about society, rather than just the individual, and not just about the individual’s desire for self-esteem and recognition. Our Church has always stressed the importance of community, community among believers and community with society at large.

That Ireland still has a strong spirit of organized volunteering today is due, in large measure, to the heritage of voluntary organizations formed by and around the Catholic Church. This heritage must be preserved and enhanced. I am convinced that Maynooth, through its part-time and full-time education programs for lay people, will contribute greatly to this.

The college will continue, as I have said before, its basic vital responsibility of educating the priests and lay religious of the future. As I said, it will prepare priests to do their work in a world very different from that which ordained priests in the 1960s faced.

There will be drastically fewer priests, fewer people going to Mass, and a much more cluttered and unsympathetic communication space through which the Church can communicate its message. As far as Catholicism is concerned, Ireland has become a mission territory.

In the past, the priest could do much of the work himself. In the future, he will have to work more and more with lay people, most of them unpaid. The skill set of a priest in the 2030s will be to motivate others to do the work, rather than doing it all himself.

Motivating and supporting volunteers is a skilled and demanding job, in which the priests and lay religious of tomorrow must become expert practitioners. The priest of the future will have to share power, while ensuring that the essential doctrines of the Church are faithfully transmitted.

Indeed, education in the doctrines of the church will become increasingly important. This is because we live in a world where believers want to be heard but also demand clear answers. There is a real tension between the desire to be heard, and the desire to be led. And it is a tension that will be expressed in the Synod. Faith and reason must sit together in the Synod.

In the past, we may have grown accustomed to having clear answers provided by church teaching. For some of us, the controversy between prominent figures in the Church is troubling, even heartbreaking. We want a clear line that we can follow, not a cacophony. It is also a feature of politics, and the Church can learn from politics. Parties with too many competing messages do not do well in elections.

The opinions expressed in this article are those of the author and do not necessarily reflect the editorial policy of Fair Observer.