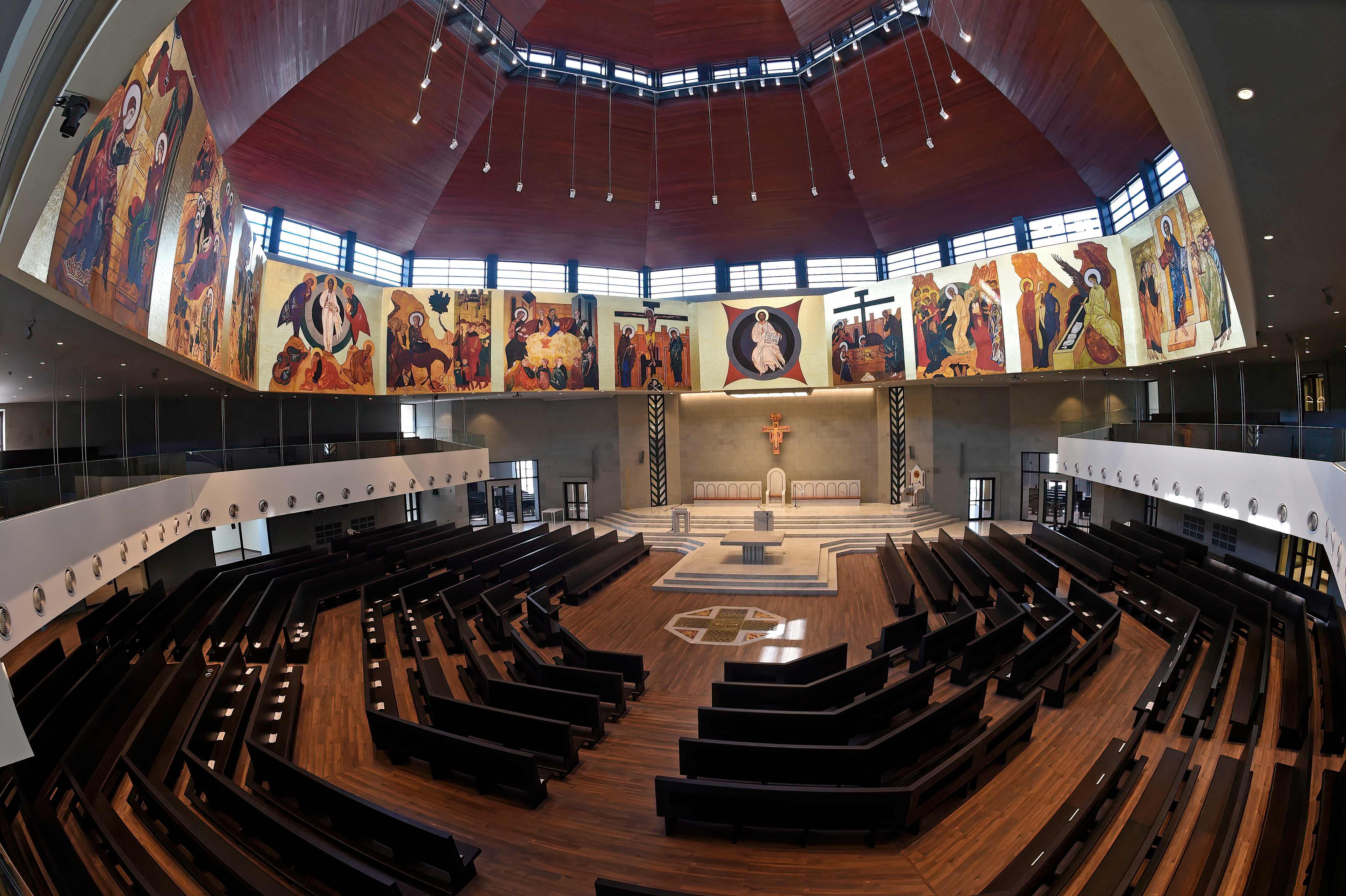 The largest Roman Catholic cathedral in the Gulf opens in Bahrain

The largest Roman Catholic church in the Persian Gulf has opened in Bahrain.

The Cathedral of Our Lady of Arabia, which can accommodate at least 2,300 people, is located in a desert town about 20 kilometers south of the capital, Manama.

The modernist church with an octagonal dome, several levels of seating, two chapels and an auditorium with a capacity of 800 is fast becoming a focal point for Bahrain’s 80,000 Catholics and an architectural monument.

The flags of Bahrain and the Pope fluttered on the roads, as the sound of hymns wafted from the cathedral benches into the desert air before the opening.

It is truly an achievement for Bahrain. This will encourage others who would like to come and live in Bahrain. It means you are welcome

â€œWe are happy to have such a wonderful and extraordinary building that will be an architectural highlight in Bahrain,â€ said Bishop Hinder. “We are grateful.”

It is the culmination of years of work involving the country’s leaders, Church figures, the wider Roman Catholic community of Bahrain and dozens of others, from architects to builders. It also speaks to a rich history of tolerance in Bahrain for other religions that dates back centuries.

Our Lady of Arabia – named after the patroness of the vicariate of northern Arabia – can be seen for miles around, and its design is striking. It looks like a tent in which the Prophet Moses met his people, as described in the Old Testament, and is topped by an octagonal dome under which most of the congregation will sit for Mass.

The gray walls are made of pietra serena stone which is only produced in Florence. On the walls are a series of icons depicting scenes such as the death and resurrection of Jesus, made with materials including 24k gold shipped from Italy. Light is constantly flooding the church from different angles.

“I feel joy and full of emotion,” said the cathedral’s Italian architect Mattia Del Prete, looking at her work years after her team won the global competition to design it.

â€œThe most fundamental aspect of the whole project is the light. At every moment of the day, it changes color and atmosphere.

The opening is a time of celebration for Catholics in Bahrain, but also to express deep gratitude to their host country. Arabia is a place where, for centuries, Islam has prevailed over Christianity. But Bahrain has long allowed people of other faiths, from Judaism to Hindu, to pray in peace. A Hindu temple was established in Bahrain about 200 years ago, while in the 19th century an American mission was allowed to open a church there.

“It was not really an easy question for a very conservative, very Muslim, Arab leader,” said Sheikh Khalid bin Khalifa Al Khalifa, chairman of the board of the King Hamad Global Center of Peaceful Coexistence. â€œI’m sure he had a lot of opposition, but he got over it. He foresaw the future.

In the 1930s, Bahrain became the commercial center of the Persian Gulf thanks to the oil boom. The first Roman Catholic church in the Gulf – the Church of the Sacred Heart – opened in Manama in 1939 with the arrival of more workers. The new cathedral is close to Awali, a small town in the center of the country that long hosted expatriate workers during the oil era. From the walls of the church, we can still see oil heads pumping.

Today, Catholics in Bahrain are mostly migrant workers from dozens of countries, but mostly from the Philippines and India. Bahrain is also one of the few GCC countries to have a local Christian population – largely Roman Catholic – of around 1,000. The majority of them were originally Arab Christians from the Middle East and immigrated to Bahrain in the 1930s to 1950s and now hold Bahraini nationality.

â€œTolerance is important, but not just tolerance,â€ said Bishop Hinder. â€œWe have to enter into mutual understanding. It doesn’t mean that I have to convert to the other religion, but I have to have a good understanding and get rid of all prejudices. It is an ongoing process and never ended.

Relations between Bahrain and the Vatican have progressed in recent years. King Hamad presented a model of the cathedral to Pope Francis in 2014 and he also invited the pontiff to visit the country.

King Hamad also approved the Document on Human Fraternity, signed in Abu Dhabi by the Pontiff and Dr Ahmed El Tayeb, Grand Imam of Al Azhar in 2019 which aims to bring people together in a spirit of respect and tolerance.

Due to Covid-19 restrictions, only a small number of people attended the opening. The cathedral will be consecrated – that is, blessed and ready for services – on Friday.

“The importance of this cathedral is not only the history but also the size,” said Sheikh Khalid. â€œItâ€™s truly an achievement for Bahrain. This will encourage others who would like to come and live in Bahrain. It means you are welcome.

On Thursday, in front of the cathedral, were hung posters showing the construction with the slogan “journey to a dream”. On Thursday, that dream came true.