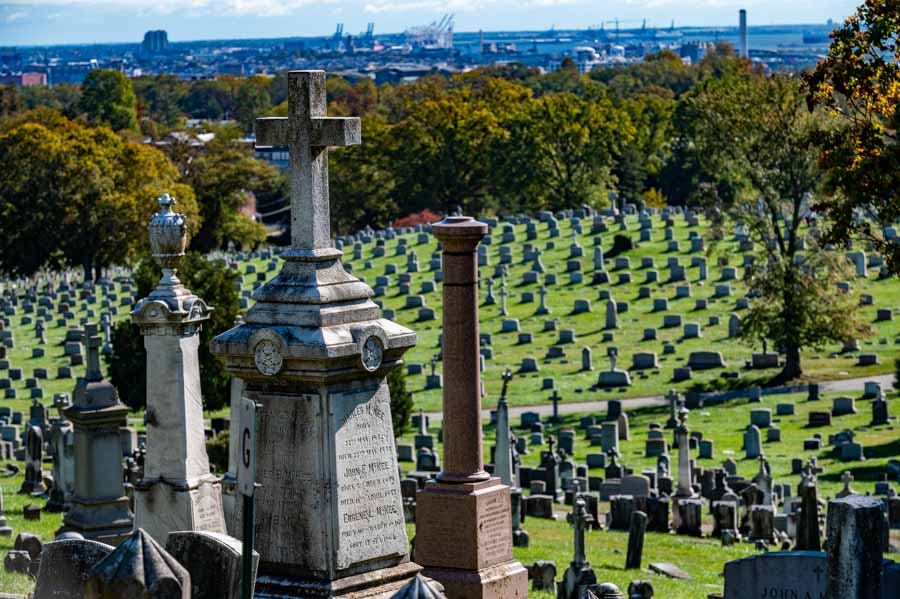 The new cathedral cemetery, now 150 years old, is the last resting place of the humble and famous

The oldest grave in the New Cathedral cemetery belongs to Margaret Mary Bevans. His burial on March 13, 1871, in lot 69, section D, is duly noted in a handwritten note in flat book number 1.

Since that date, 150 years ago, the cemetery of the New Cathedral has become the resting place of more than 111,000 people, including priests, nuns and notables of Maryland such as Governor Herbert R. O’Connor , Baltimore Mayor Clarence “Du” Burns, sports journalist John Steadman and businessman Reginald Lewis.

Four members of the Baseball Hall of Fame are also buried – more Hall of Fame members than any other cemetery, noted Susan Schmidt, who has worked at the cemetery for more than 30 years. They are Orioles manager Ned Hanlon, Joseph Kelley, Wilbert Robinson and John McGraw, a former Oriole turned manager of the New York Giants. A baseball and Giants cap hangs on the door of the mausoleum where McGraw is buried.

James and Bernardine Keelty, who funded the construction of St. Bernardine Church in West Baltimore, and Thomas O’Neill, a businessman whose legacy led to the construction of the Cathedral of Mary Our Queen and The Good Samaritan Hospital are also located in the cemetery of the New Cathedral. as members of the families of Charles Carroll and Francis Scott Key.

Rock musician Frank Zappa is not here, but his grandparents are.

Mother Mary Lange, founder of the Oblate Sisters of Providence, was buried in the cemetery after her death in 1882. But in 2013, her body was transferred to the sisters’ motherhouse in Arbutus. “All the nuns came,” recalls Sharon Zepp, director of the cemetery office.

There remains a monument to Mother Mary, as well as the earthly remains of her sisters.

Not only the famous and influential are remembered at the cemetery of the New Cathedral.

Some of the tombstones belong to those who died too soon.

A realistic monument to Daniel and Eleanor O’Donovan brought visitors to their grave. The children, carved in marble, stand side by side in dresses trimmed with lace. Eleanor wears a scarf wrapped around her neck by a caring visitor. Toys have been placed at their feet.

The children died in 1905 during a scarlet fever epidemic. Daniel, who was three years old, was the first to die on January 2, 1905; Eleanor, 5, died 25 days later. Their parents, Daniel and Lily O’Donovan, sent portraits of them to sculptors in Italy to have a realistic monument made, according to Schmidt.

The new cathedral cemetery, owned by the Archdiocese of Baltimore, replaced two old cemeteries. The oldest, St. Peter’s Kirkyard, opened in 1770. The original cathedral cemetery was established in 1816. According to director Nathan Nardi, all remains, monuments and tombstones, along with their records, have been moved to this “new” location.

Then, in 1936, St Patrick’s Parish moved its cemetery to the New Cathedral Cemetery at Fells Point. Its tombstones are the oldest in the cemetery.

More recently, graves from the Trinitarian Monastery in Pikesville and a Dominican grave in Catonsville have been moved there. The new graves included vaults, original or replaced tombstones and special monuments, according to Nardi.

The cemetery began on the 45-acre Bonnie Brae property. It grew to 125 acres with the subsequent purchase of adjacent farmland.

More than 160 are buried each year, although that number increased during the Spanish flu epidemic where as many as 29 were buried in a single day, according to Schmidt.

“Families were digging graves. The cemetery couldn’t keep up, ”she said.

Due to the growing interest in cremation, a new cremation garden has been established, according to Nardi. There are a variety of granite monuments to hold one urn, or up to four, he said. An angel statue watches over the space, accessible to people with reduced mobility.

Two full-time and one part-time office workers and three maintenance employees are dedicated to the maintenance of these final resting places. Nardi estimates that burials will continue at the cemetery for another 30 to 50 years – and the perpetual investments in care ensure the cemetery is maintained forever, Nardi said.

In addition, notes on all the tombs are carefully preserved, not only in the original handwritten dish books, but in databases. Basic genealogical information is available on the cemetery’s website, newcathedralcemetery.org. More detailed information can be obtained for a fee.

The unfolded Christ or the Roman Catholic Christ