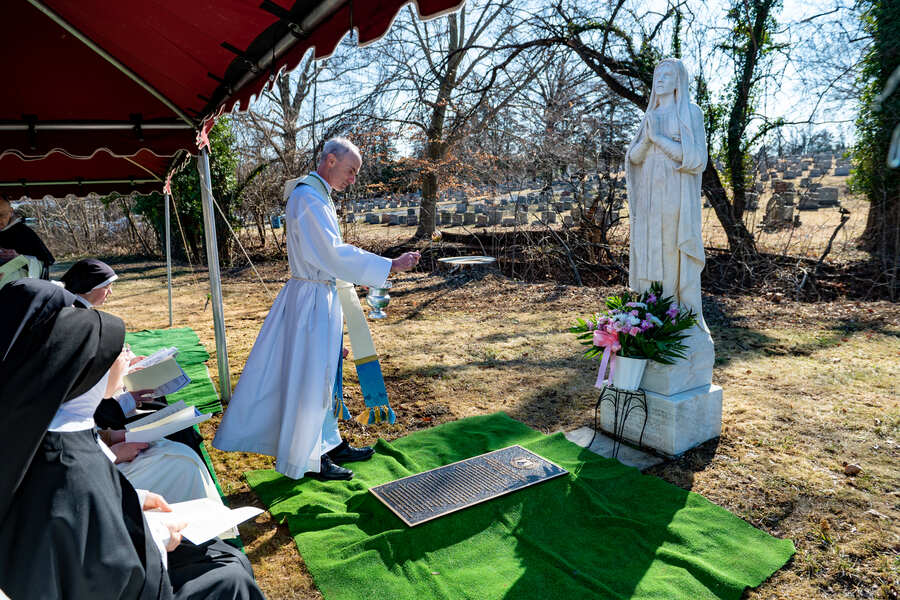 Twenty-six Dominican Perpetual Rosary Sisters who have dedicated their lives to constant prayer have a new resting place at New Cathedral Cemetery in West Baltimore.

The cemetery, religious order and Archdiocese of Baltimore held a dedication ceremony Feb. 11 to bless the new burial site, completing an odyssey to move the nuns’ remains from the grounds of a former monastery in Catonsville.

The Cloistered Sisters were part of a monastery in Catonsville that served the area from 1899 to 1980. After it closed, the land was sold to a medical group and the cemetery fell into disrepair.

In 2016, as part of a research project with the cemetery of another monastery in New Jersey, Dominican friar Ignatius Perkins visited the Catonsville site and was alarmed by its condition. After discussions with her religious order and the Archbishop of Baltimore William E. Lori, it was decided that the best option for the sisters’ perpetual care was to move them to the new cathedral on Old Frederick Road.

“As we honor the sisters who are reinterred here today,” Bishop Parker said at the consecration, “it is important that we honor their legacy by continuing to build up the Body of Christ just as they preached the Gospel of their life”.

“We have a beautiful monument here and it honors those who have gone before us, but it is not just about what is finished and completed, but what is yet to come,” Bishop Parker said.

Some members of the Dominican Sisters of the Perpetual Rosary arrived in Baltimore in 1903 after being expelled from France after new laws suppressed religious orders there.

The legacy of the Dominican sisters in the Baltimore area played a key role in the decision not to move their remains to another cemetery at an out-of-state Dominican monastery.

“The sisters prayed and ministered in Baltimore, and their remains deserved to be cared for there. Their mission continues in Baltimore even though they are deceased,” said Brother Ignatius, of St. Thomas Aquinas Priory in Charlottesville, Virginia. “We must honor our dead and they must be in dignified places. It was a privilege to oversee this project.

The physical move took about two weeks to complete last fall, but the fundraising and planning required a massive effort that lasted more than a year and was led by Brother Ignatius, who oversees 14 cemeteries. in his Dominican province.

“When you look at a cemetery, you look at it as an eternal duration,” said Nathan Nardi, director of operations at the New Cathedral. “That’s what was so unusual here. Circumstances had changed and had to be dealt with. The new cathedral has been here since 1871 and we know we will be here forever. It is therefore the best thing for the perpetual care of the sisters.

Nardi said the statues and tombstones were moved from the old grounds to the new cathedral and moved with the remains, which date back to July 24, 1900. The new site includes a vault and a new bronze plaque with each of the sisters. names as well as two recently buried sisters.

The project cost approximately $150,000 and received a foundation grant from the Severn Bank in Annapolis and donations from 25 motherhouses and 15 convents nationwide in addition to donations from several lay groups and individuals.

“The new cathedral cemetery is a wonderful gift,” said Brother Ignatius. “The staff there are simply amazing, and Nathan Nardi and Father Patrick Carrion (Director of Cemetery Management for the Archdiocese) have been incredible advocates for the project. It is very powerful to know that there will be perpetual care for our loved ones.