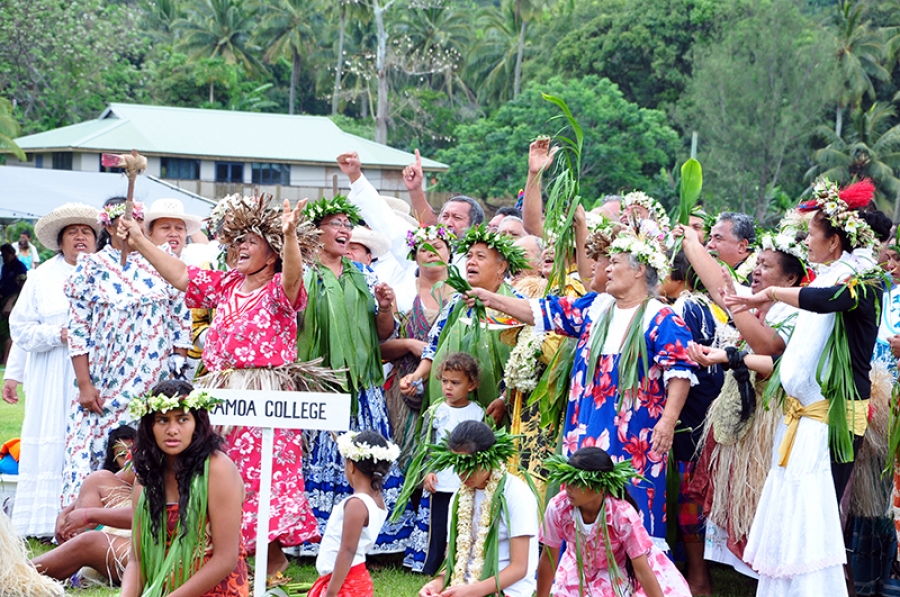 The strength of Christianity in the Cook Islands

Gospel Day is a joyous and exciting holiday for the Cook Islands, with bouncy drama and songs presented by members of the local religious community. 17102428

On August 26, 1821, the Reverend John Williams of the London Missionary Society (LMS) arrived on the shores of Aitutaki and, with his disciple and interpreter Papeiha, brought Christianity to the people of Aitutaki.

The missionaries were not the first to find the islands, Captain Cook arrived in 1773 and 1777 sailing and mapping most of the group, surprisingly he never saw Rarotonga and he personally never set foot than on a small uninhabited Palmerston atoll. It originally named the group of islands the Hervey Islands in honor of a British lord of the Admiralty. It was half a century later that a German Baltic Russian admiral Adam Johannn von Krusenstern who published the Atlas of the Pacific Ocean, renamed Hervey Island in the Cook Islands in honor of Captain Cook.

The surprising success of Christianity in Aitutaki led Williams to seek out the great island of Rarotonga. They spent the next two years bouncing around the islands of Mangaia, Mitiaro, Mau’uke and Atiu. It was not until an ariki from Atiuan who had repeatedly invaded Rarotonga gave instructions to the missionaries and they landed in 1823. Rarotonga became the main base of LMS, and the Rev. John Williams spent several years to preach with another missionary called Aaron Buzacott. If you turn left after the Justice Building roundabout and head towards the mountains you will see a white monument like a small roundabout – this is where Papeiha’s first sermon was held in 1823 .

Christianity has converted the local people from their worship of more than 60 gods, for rain, fishing, fertility or war to the recognition and acceptance of a peaceful God. The acceptance of a peaceful God by all the tribes allowed a truce whereby they could leave their mountain fortresses to live side by side on the flat, fertile lands in relative harmony without losing their mana. Previously, the concept of compromise or negotiation was seen as a weakness and loss of status, by accepting a peaceful God they accepted a peaceful life and retained their mana. They celebrated this with the annual recognition of Gospel Day on October 26.e
like a holiday where churches choreograph big performances on a different theme every year, and tomorrow the 200th anniversary celebration in Aitutaki promises to be sensational. Hundreds will attend, hundreds more will watch and pray from afar due to travel restrictions.

Many tourists question the arrival of Christianity which results in the loss of our traditional customs, the burning of maraes, statues and the changes made to our traditional way of life and our island laws. They go on cultural village tours to learn more and lament the fact that the modern world is taking over the islands so completely. More so, they often see the arrival of Christianity as similar to the Pilgrims in America and the bloodshed of the Spanish Inquisition in South America. Our story was different, we still suffered losses of language and laws, but to some extent the late arrival of Europeans bodes better for us as it seemed they had learned the lessons of land colonization Maori of New Zealand, which has resulted in beneficial approaches for our islands. True, it is not a perfect system, but a larger percentage of the population sings praises to the Lord and to Christianity more often.

The strength of Christianity in the Cook Islands is seen daily. A Pure or prayer is offered before each meal in private and in public, during boards of directors and sports competitions. Sunday is a day of rest and noisy manual labor and gardening are frowned upon. It’s not uncommon for a mom to pat you on the shoulder and ask if you’re a Christian if she sees you working on a Sunday. The bells ring at 6 a.m. on a Sunday, people, families, children are dressed in their Sunday clothes to worship under the roof of God, some built by the missionaries using limestone coral from the lagoon still remain today ‘hui. Clothing is encouraged towards the sober and covered where walking around town in a bikini is not acceptable and even on our beaches a mom can be seen berating young tourists for topless sunbathing in public. We were saved from war and fighting by the missionaries and their one peaceful God, and we began to live in peace.

Nowadays in Rarotonga you will see many different denominations and religions, the CICC Cook Island Christian Church in limestone buildings, formed by LMS, is Protestant, Roman Catholic, Seventh Day Adventist, Jehovah’s Witness, Saints of the latter days, Assembly of God, Mormon, Apostolic Church and others, some with names like The Rock, or Wave Church. Baha’i, Jewish and Muslim faiths are also present and attended by residents.

Celebration of Christianity is rampant here, not for everyone, but working for free on Lazy Sundays is a religion I can recommend.

The Daily Herald – Welcome Service for the New Catholic Priest